The seventh hospital attack identified occurred on 27 April 2017. Hadi Al Abdallah has published a video on his YouTube channel at 08:24 Damascus time showing the destruction in the hospital after the attack. See below:

Sun analysis demonstrates that the video was filmed in the early morning hours. See below: 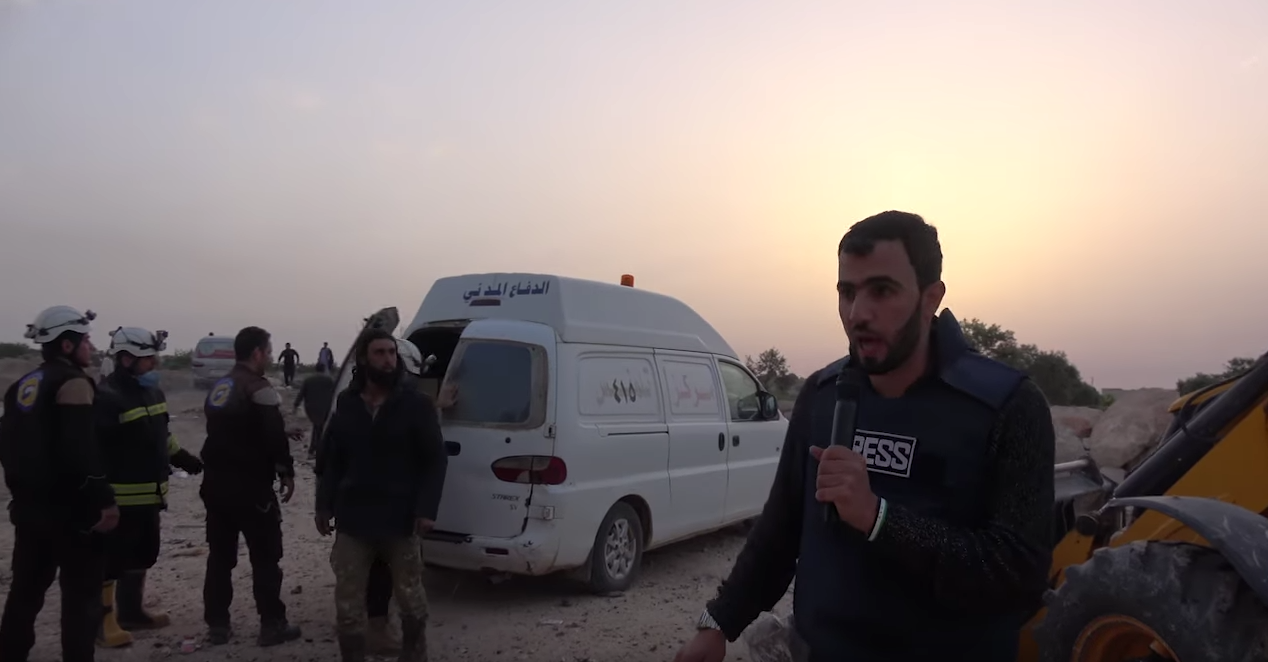 At 02:03 of the video above: Hadi Al Abdallah is seen interviewing one of the Civil Defense team members during the rescue mission. In his interview, Al Abdullah states: “The university hospital was targeted in Deir Sharqi by airstrikes. After the first airstrike the civil defense team went to rescue civilians and there were big number of injured and casualties. The second attack that included four airstrikes happened while the civil defence were rescuing injured civilians or recovering casualties”

The Civil Defense team published a video showing the rescue operations. The Syrian Archive was able to geolocate the hospital using public information and video footage, and comparing it to satellite imagery acquired from [**DigitalGlobe ©2017]** taken before the attack. Also huge crater, which was formed as a result of the attack, can been seen in a video published by Orient News Agency. See below: 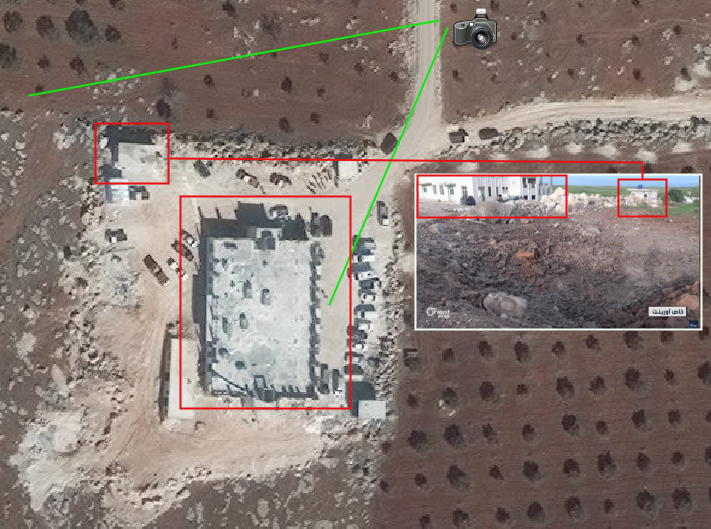 This raises the possibility that an air to ground attack was conducted around the hospital. The smaller building located to the western side of the building was attacked and completely destroyed, as shown in the video published by Orient News. See still from the video below: 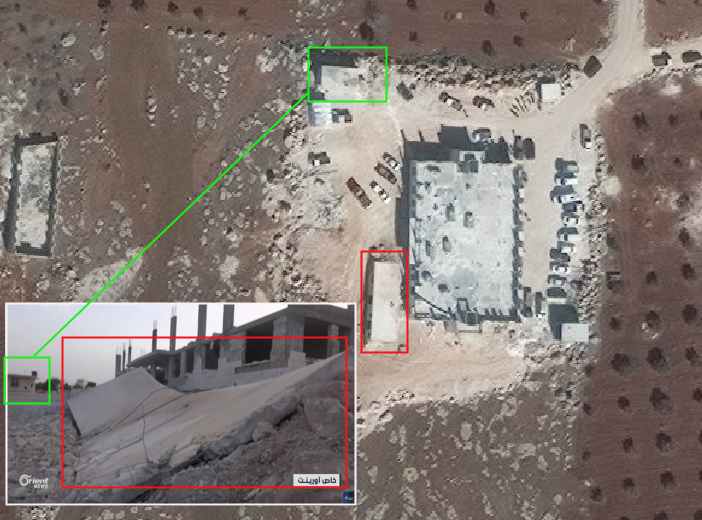 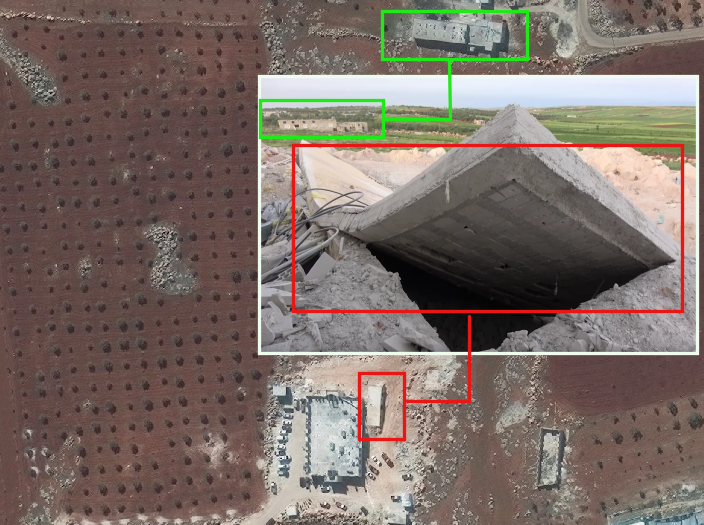 Muaz Al-Shami, a citizen journalist, and Qasioun News Agency have separately published videos showing those injured and the casualties as a result of this attack, as well as the damage to the hospital building.

This damage includes damage to interior of the hospital, as well as to its equipment, medical stock, and oxygen-tank supply, as seen in the following video stills: 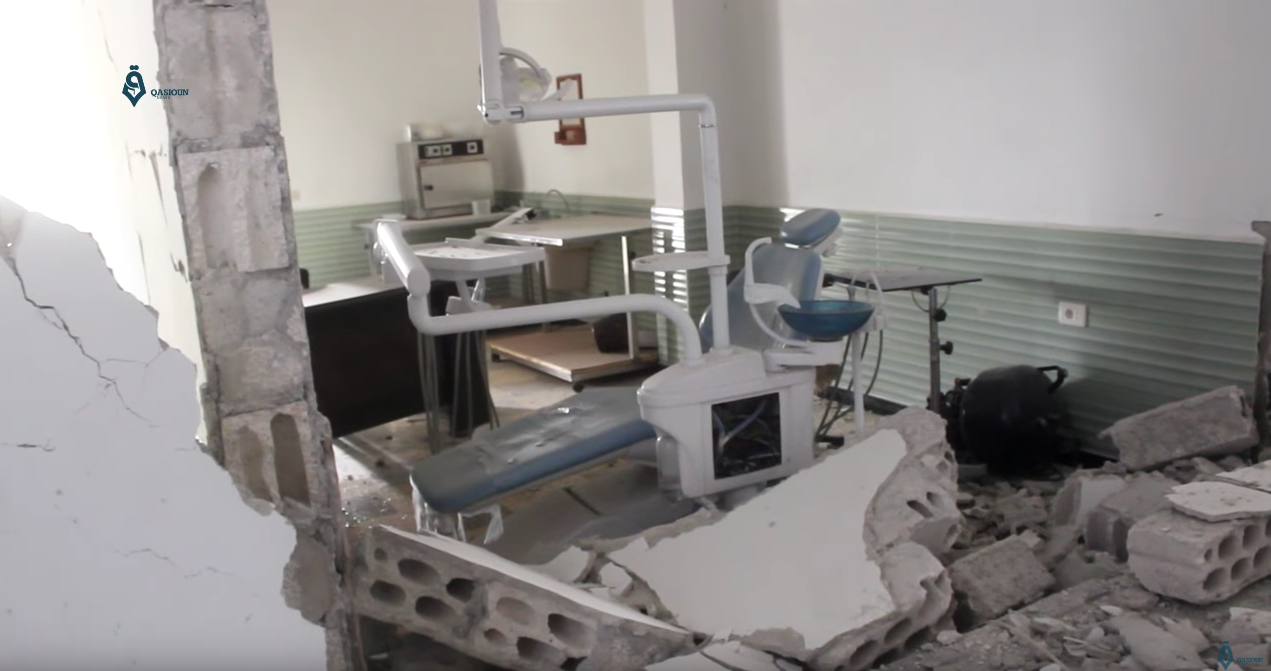 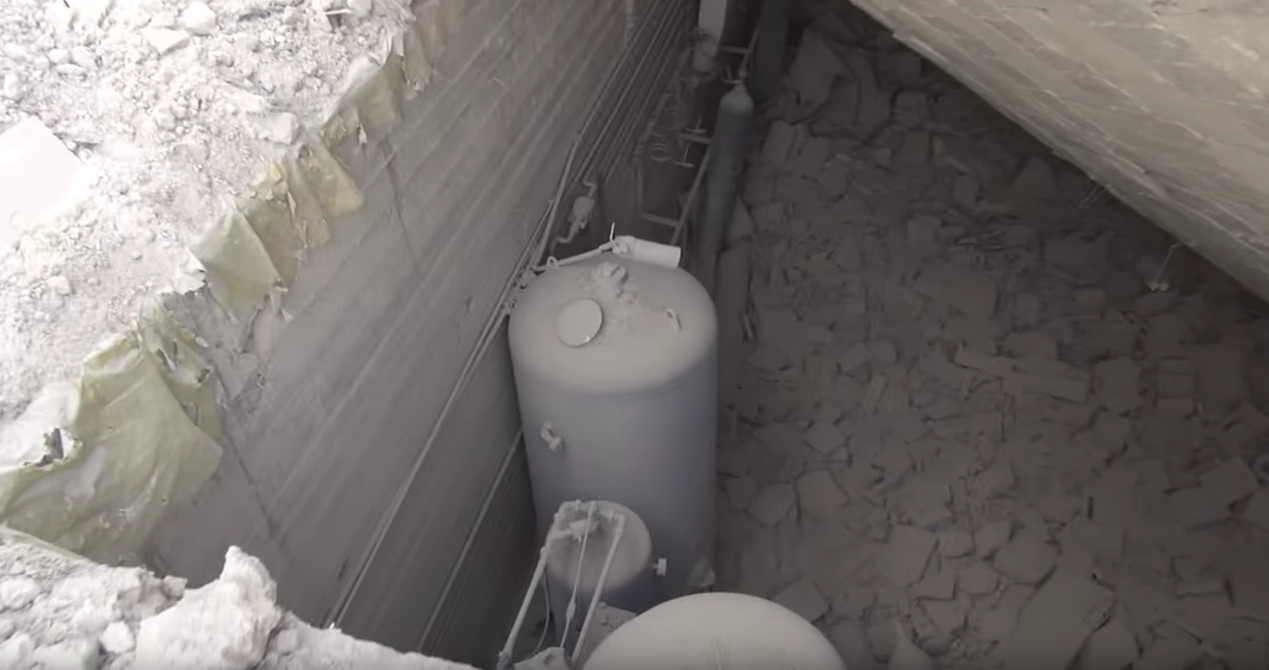 Videos filmed by Qasioun News Agency and by the citizen journalist “Hadi Alabdallah” show that the roof of the hospital building was hit. See stills from the videos below: 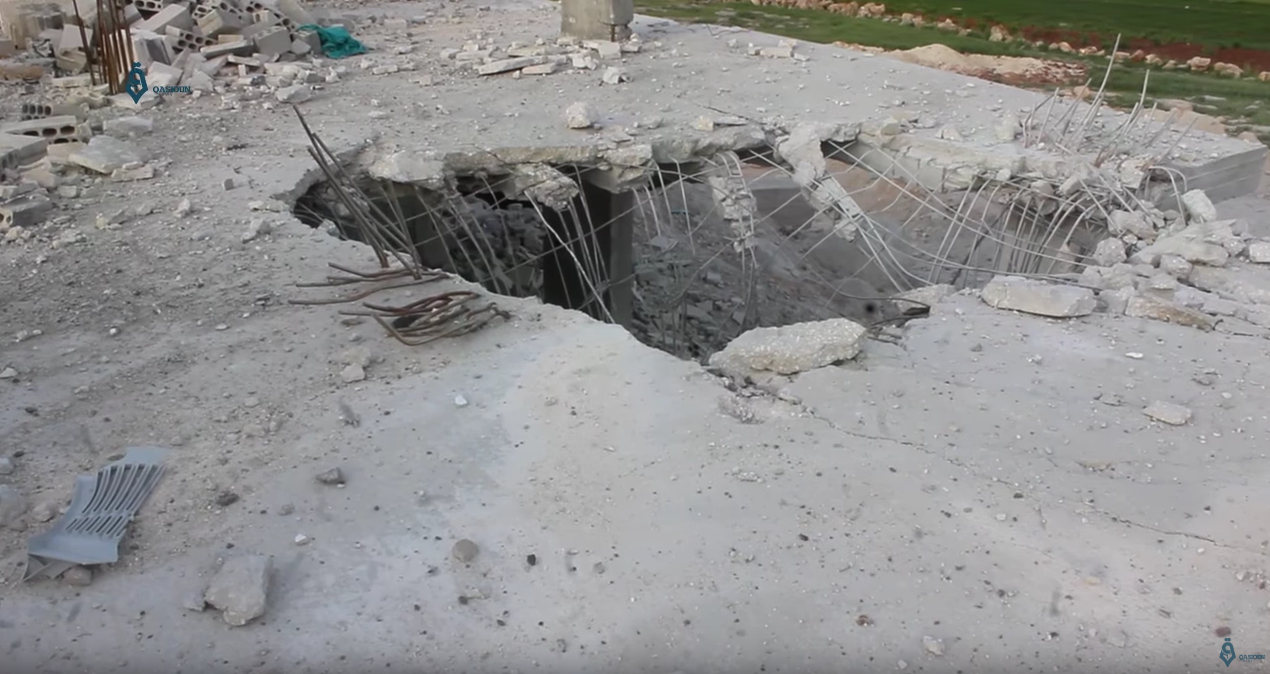 That the hospital building was hit from above raises the possibility of an air to ground attack that targeted the hospital directly.

To provide a further layer of verification, the Syrian Archive analysed flight observation data provided by a spotter organisation. This consisted of analysing observation data flights between 03:00 and 07:00, the period directly before and after the reported attack. See below:

The report’s source for flight observation data has found that circling flights typically indicate target acquisition and/or preparation for imminent attack. The flights seen circling the attack site in the period around 05:20, indicated in the visualisation above, were likely the aircraft responsible for the attack, confirming witness accounts that an attack on the hospital occurred at 05:15. As with previous incidents, though some aircraft are labelled “Russian,” it is possible the flight was operated by the Syrian air force, rather than the Russian air force, as the Syrian air force also used Russian planes. 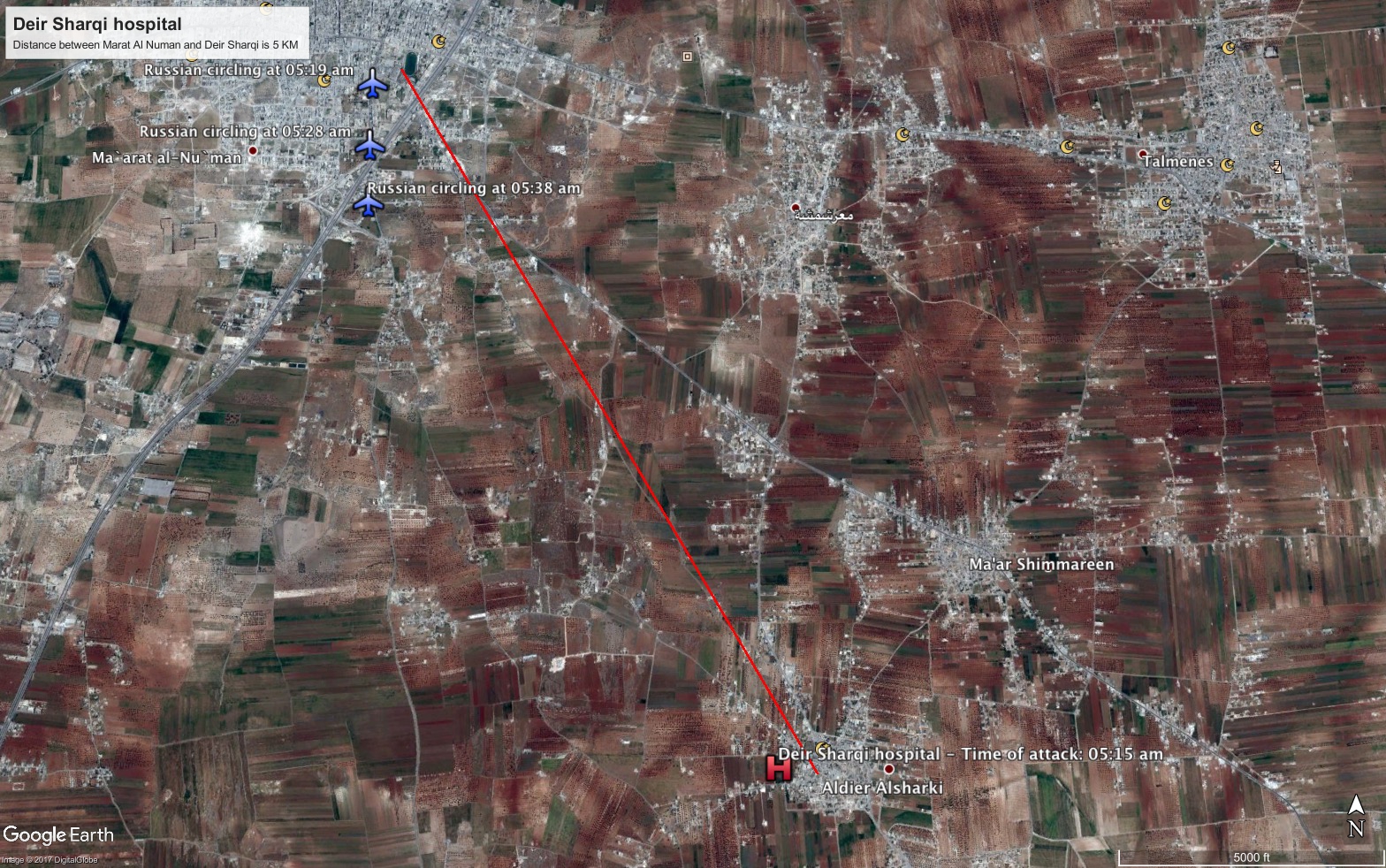 The map above demonstrates that the medical facility attacked was well within range of the aircraft detected. The three Russian planes observed and determined to potentially be involved in the attack was detected circling 5km from the attack site directly after the attack had taken place.

Witness statements of the attack was provided jointly by Syrians for Truth and Justice and by Justice for Life. In his statement to the investigative team, neurologist and hospital staff member Mohammed Al-jesry stated:

“On April 27, 2017, exactly at 05:15 am at dawn, the attack occurred when I was still awake in the hospital…Warplanes directly targeted the hospital with two sustained strikes, we immediately rushed again into the hospital, as soon as the strikes stopped, because there were three to four patients in the intensive care room, but unfortunately, they had died because the gas supply was broken, [which] consequently caused the oxygen to be cut from the patients. Moreover, some members of the medical stuff were injured, and 90% of the hospital was almost completely destroyed because the Russian planes used concussion rockets in the attacks.”