The eighth hospital attack identified took place on 27 April 2017. Hadi Al Abdallah, a citizen journalist, published a video about the attack showing the medical point on fire as a result of airstrikes. See below:

In the video, members of the Civil Defence team can be seen extinguishing the fire as a result of the attack. Hadi Al Abdallah conducted an interview with one of the medical workers from the hospital, who stated: “Today at 07:00 this morning, the Russian air force targeted Shamel medical facility with more than one airstrike, which resulted in a large explosion and many injured and casualties including medical workers and White Helmet rescue workers. The attacks on hospitals intended to destroy all hospitals in Idlib.”

Smart News Agency also published a video showing the attacked site and features an interview with one of the Civil Defense team who was part of the rescue mission. The Civil Defense member stated:

“The Russian air force is targeting all hospitals and medical points in Idlib. Today they attacked the university hospital in Deir Sharqi and now the medical point of Shamna has been targeted as well with two airstrikes. The white helmet team came to rescue the people after the first airstrike and then they were attacked with another airstrike during the rescue mission which resulted of injuries and casualties”.

RSF Media Office also published a video showing the destruction of the hospital, its ambulance cars, as well as its medical stock. See stills from the video below: 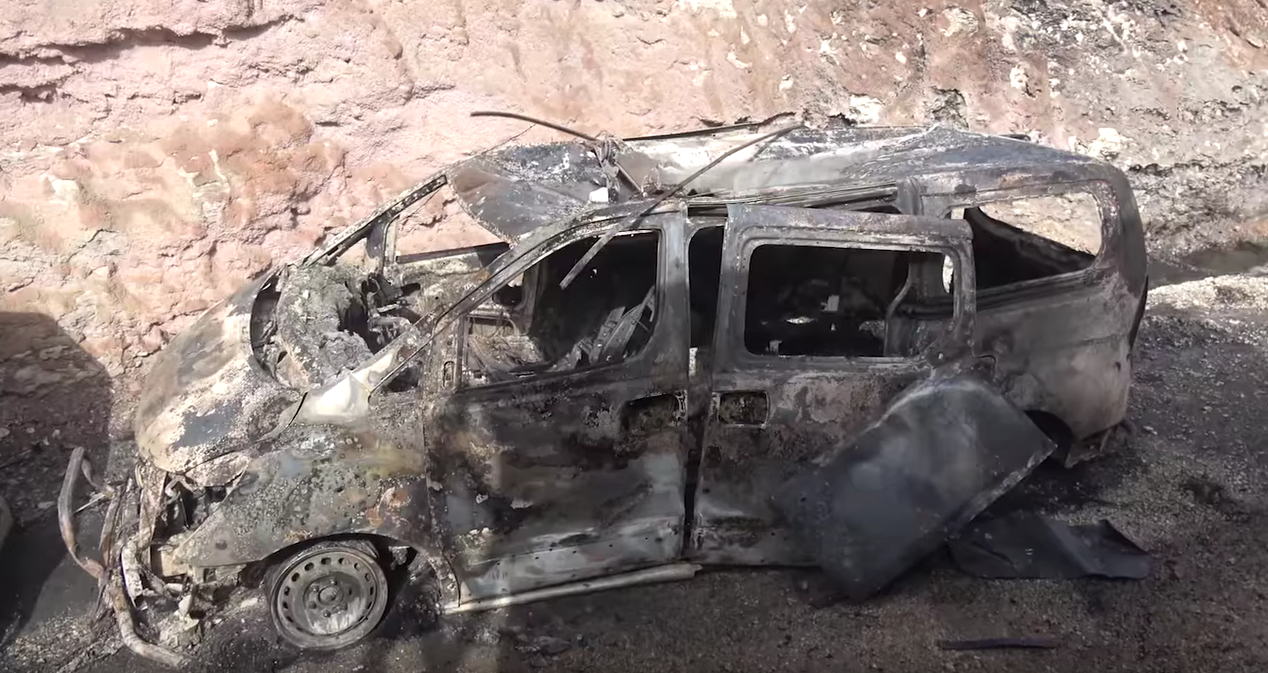 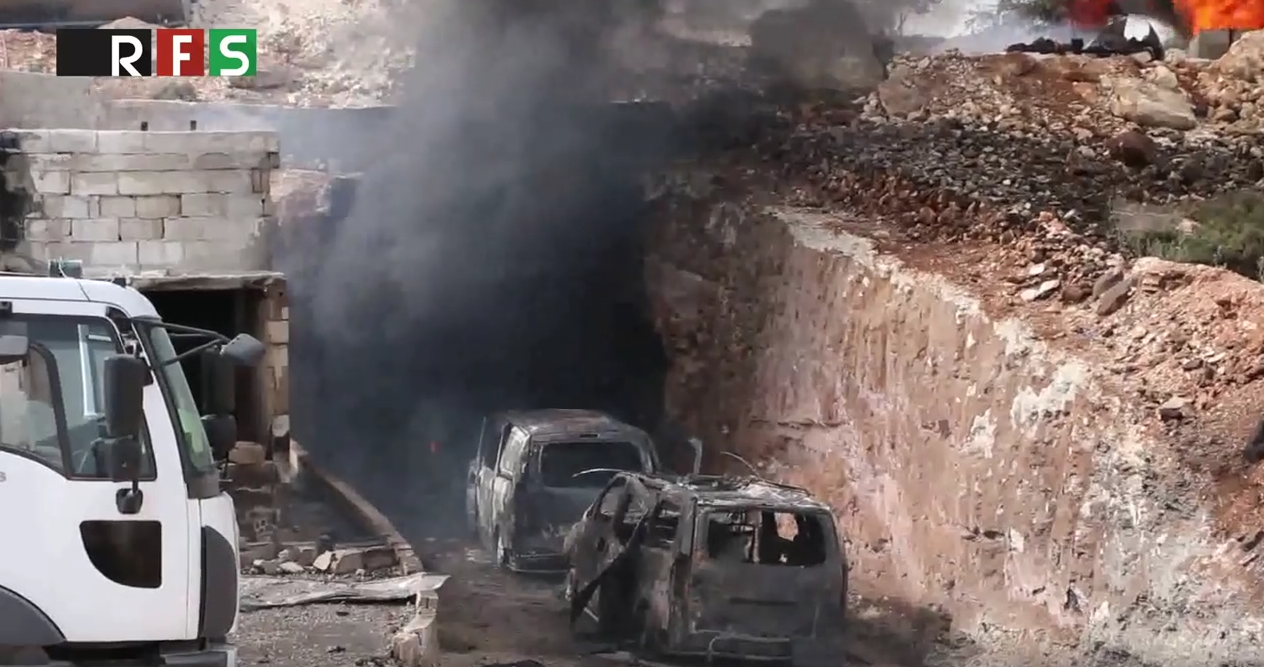 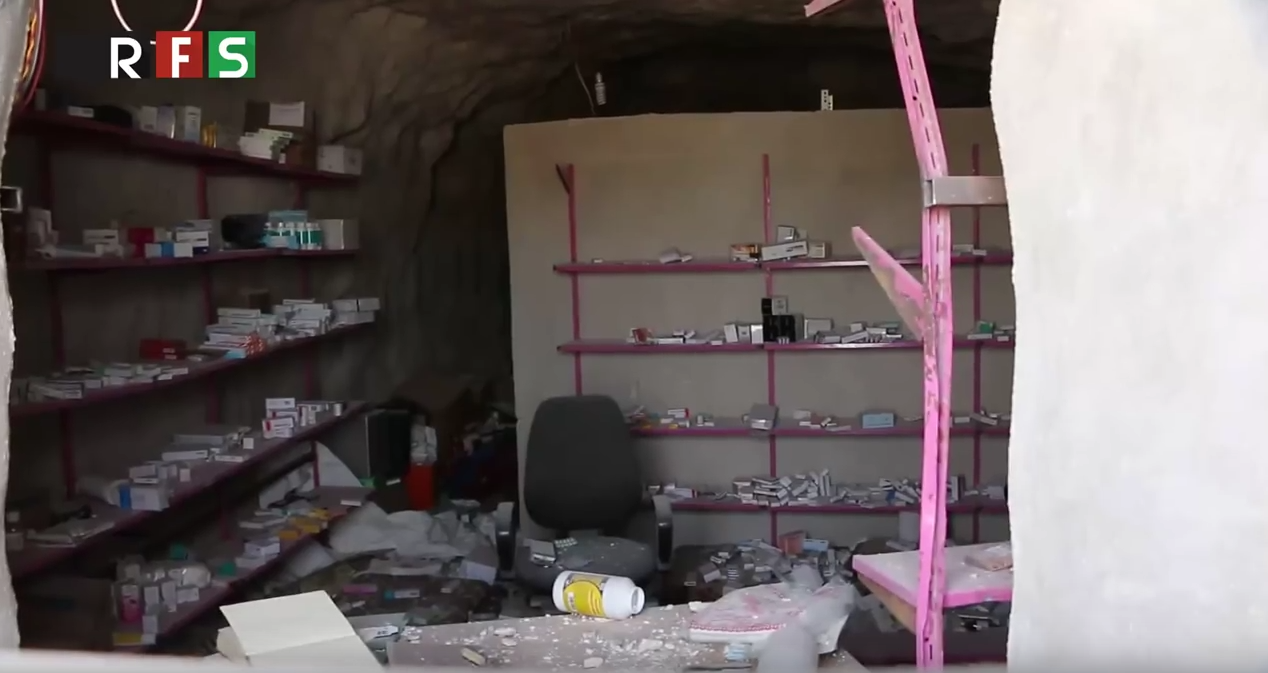 Using stills from the videos above, and using Hugin software, the Syrian Archive was able to stitch photos to clearly see the impact site. See below:

Smoke as a result of the attack can been seen, as well as objects that the Syrian Archive was able to identify from a recently acquired satellite image from DigitalGlobe ©2017 that was taken on 21 February 2017. See below: 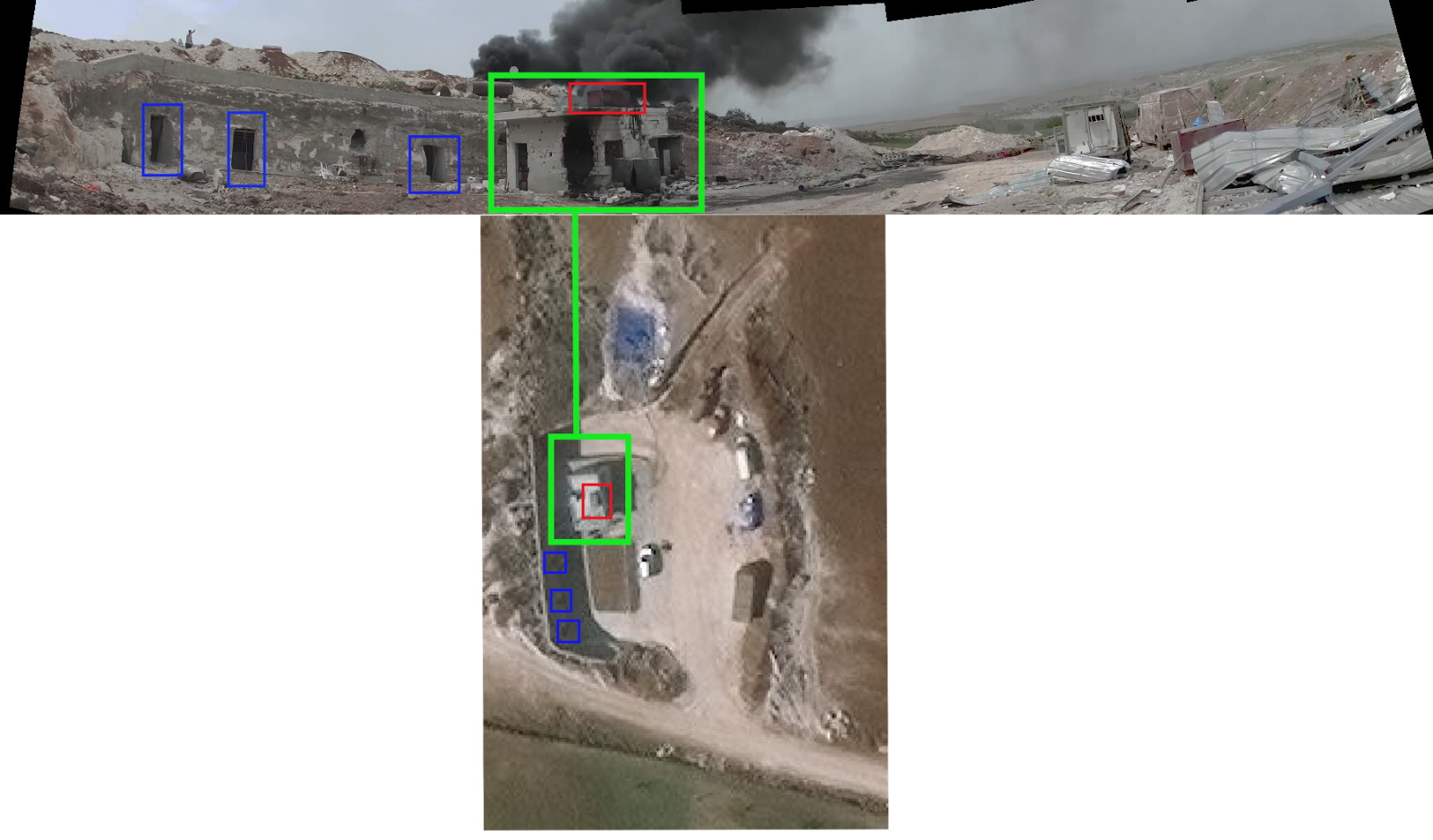 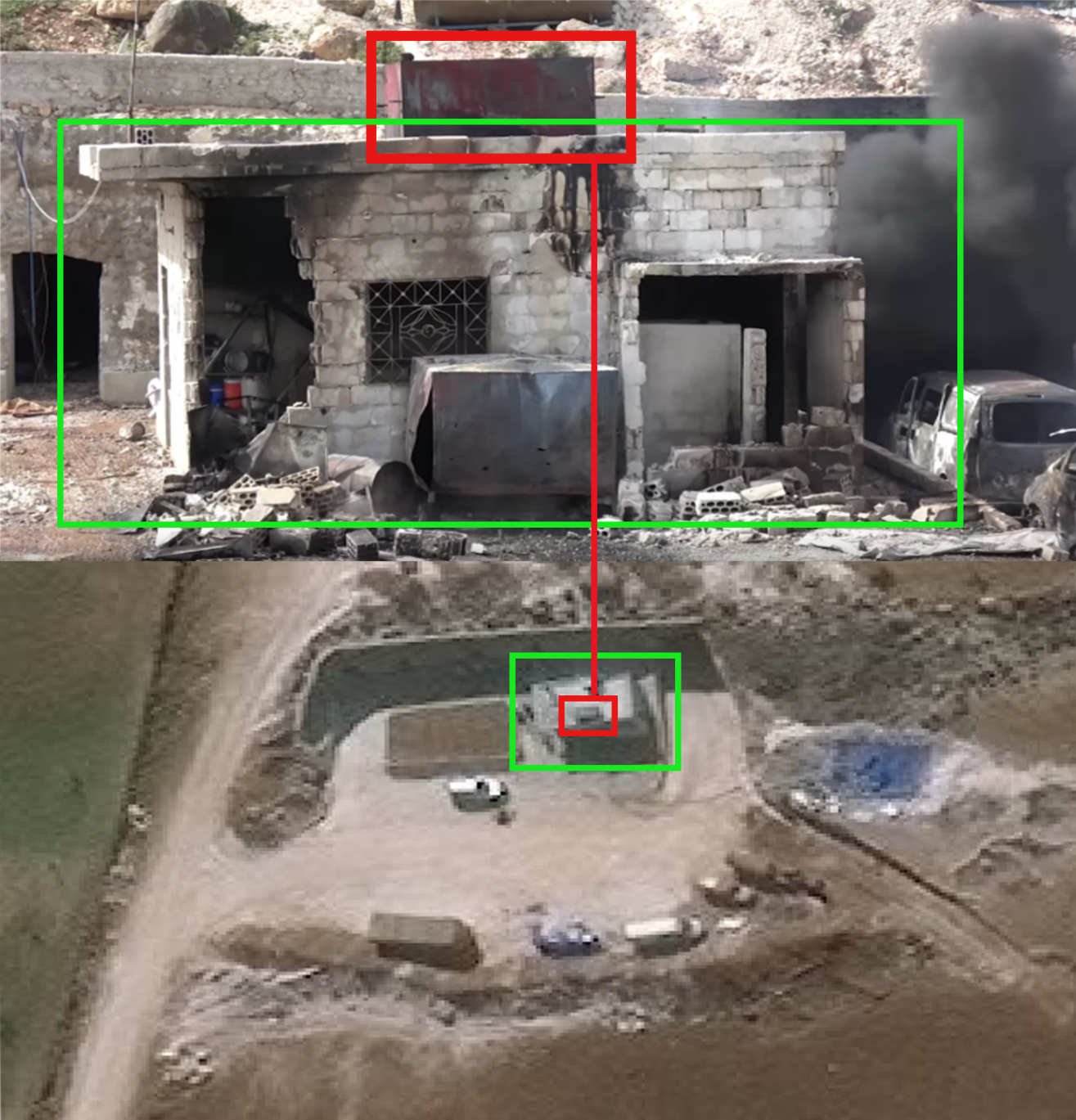 To provide a further layer of verification, the Syrian Archive analysed flight observation data provided by a spotter organisation. This consisted of analysing observation data of flights between 07:00 and 10:00, the period directly before and after the reported attack. See below:

Previous research has found that circling flights typically indicate target acquisition and/or preparation for imminent attack. In this case, several flights Russian aircraft were observed near the attack site around 07:20, which the Syrian Archive has determined were likely responsible for the attack. 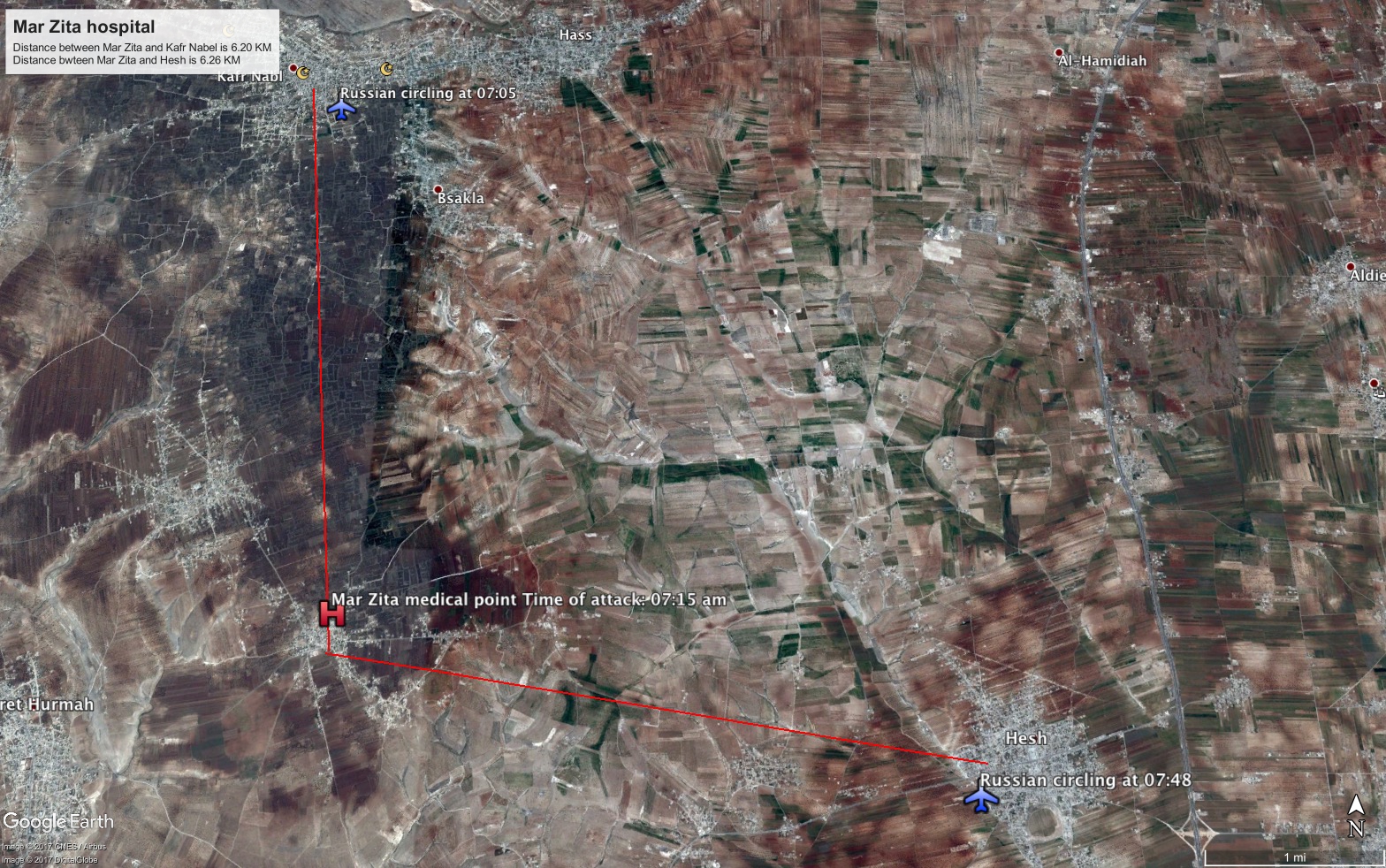 Witness statements of the attack were provided jointly by Syrians for Truth and Justice and by Justice for Life. In his statement to the investigative team, Abu Samer al-Hamawi, a nurse who works for Shamna Ambulance System in Ma’arr Zita located in the countryside of Idlib, said that warplanes believed to be Russian carried out an airstrike on Shamna Ambulance System on 27 April 2017, exactly at 07:15. The attack killed five people, including paramedics and visitors, injured others, and caused extensive material damage to the ambulance system so that it was rendered out of service. Al-Hamawi said:

“The Shamna Ambulance System is an emergency center that provides emergency services and the first aid to those who need it during the attacks. It also includes a drug store and other medical supplies such as, gauze, povidone, and sterilizers. The center serves the town of Ma’ar Zita and all the surrounding villages. I still remember well the morning of April 27, 2017. I was at home near the center when it was bombed by Russian warplanes, and I immediately rushed to look for my friends and colleagues in the system. **I was shocked when I saw Ahmad Suleiman, my colleague, seriously injured; I tried to transfer him by car because the ambulance cars were completely burned.”**

Al-Hamawi clarified that when the Civil Defense teams arrived at the Ambulance System in order to put the fires out that the initial bombing caused, Russian warplanes reiterated shelling the centre with high-explosive rockets, killing 5 people and wounding a number of Civil Defense members. The attack resulted in considerable material damage to the fire truck affiliated to the Civil Defense and the burning of a car that belonged to one of the visitors. Al-Hamawi noted that renovation of the Ambulance System is still undergoing up until the writing this report.

According to al- Hamawi, the deaths from the targeting of Shamna emergency system are identified as:

Mousa Zedan, a Civil Defense member, who was one of the first arrivals at the Shamna Ambulance System following the bombing, confirmed that the Russian warplanes targeted the fuel stores of the system and caused large fires. It targeted as well the gathering point for cars belonging to the ambulance system; there were about 7-8 cars. Zedan continued:

“Fires and smoke spread everywhere. We worked hard to put out the fires, and then we evacuated the wounded. I remember that fires lasted from 8:00 am to 2:00 pm, this state needed the fire teams from Ma’arat al-Nu’man, Kafranbel and Heesh centers to join us in putting out the fires.”