Suddenly, on a Saturday afternoon on December 7 2019, Abdul Mohsen Al Hammadi found himself in an ambulance carrying him to the nearest medical point for treatment. Captured and published by international media, the picture of the injured one-year-old after the attack was used and asserted as evidence to the targeting of civilians in Idlib.

Although Abdul Mohsen survived, his brothers, Bilal and Hassan, were killed by the airstrike. Abdul Mohsen’s sister Aya lost her life after being injured and transferred to Turkey for treatment. His father Mohammed Al Deeb and grandfather Abdo Al Hammadi were amongst the ten civilians killed by the attack on the market in the village of Balyoun.

Syrian Archive conducted an investigation into the incident, based on three steps:

(1) A local investigation’s team collected testimonies from eye-witnesses or those who witnessed the immediate aftermath of the airstrike; (2) Securing, analysing, and verifying of 47 videos and images uploaded to social media networks purportedly showing the incident; (3) The combined analysis of these sources has culminated in the present investigation report. Complementing each other, they provide information regarding the attack’s date and time, location, casualties, and extent of damage.

Examining all information available on the attack, the investigations’ team developed an understanding of the incident and potential perpetrators. 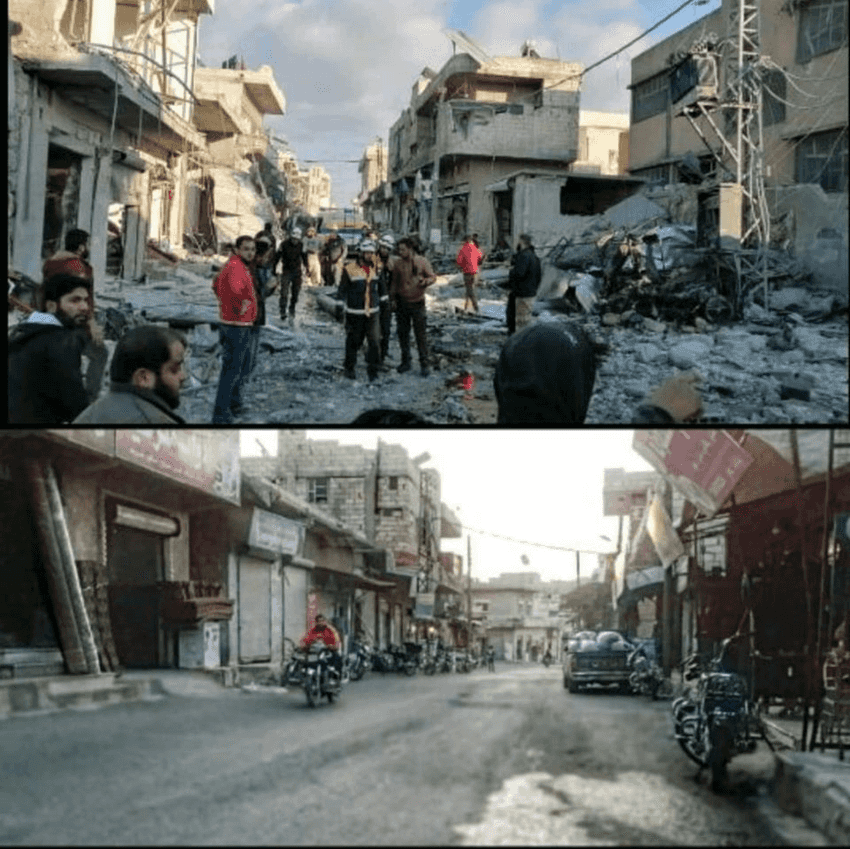 Images of Balyoun before and after the attack posted by Blyon Voice.

The population of the small village of Balyoun(35.699651, 36.504135), which is located in Jabal Al Zawiya in southern Idlib province, has increased in the past few years. Having not been directly targeted since 2017, the “semi-safe” town, according to those the Syrian Archive’s investigations team spoke with in Balyoun, is a haven for many of the families from neighboring villages and towns. As a home for the displaced, Balyoun’s population has now reached about thirty thousand people.

The town is located amongst a circle or area of villages around Jabal Al Zawiya (including Kansfara, Al Bara, Ehsim, and Ablin) that have been directly targeted throughout the past year. These villages are now almost completely empty of their residents because of attacks, while Balyoun has seen an increase in the number of homes as well as additional multistory apartment buildings to accommodate new residents. 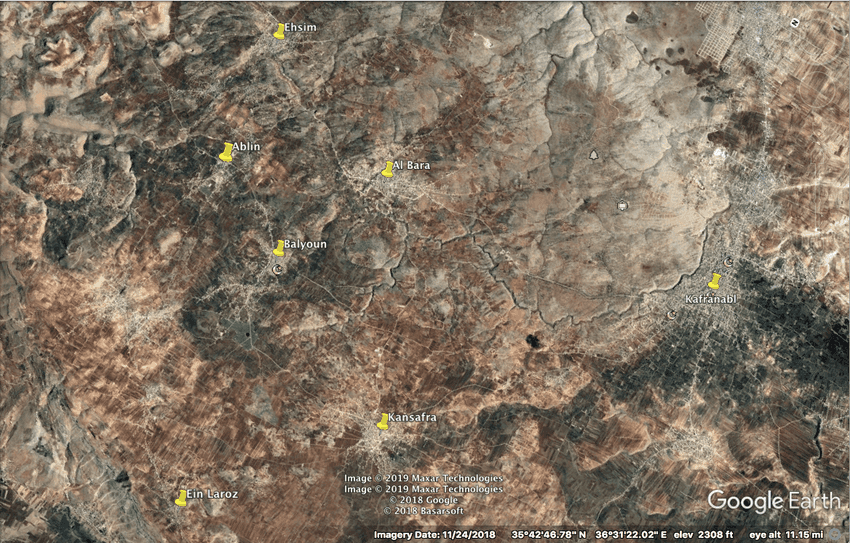 Satellite imagery from Google Earth of Balyoun and its surrounding villages.

Now in Balyoun, migrants from other villages have positively impacted its economy. This is best seen in its street or clothing market which, according to long-time residents of Balyoun, has significantly grown in recent years. In northeast Balyoun, the market, which at first did not exceed more than ten stores, now extends more than a kilometer and includes at least a hundred shops selling clothes, food, furniture, and electric appliances. The market also houses three pharmacies.

As the center of life for Balyoun and the target of the recent airstrikes on the village, the market, according to shop owners, hosts hundreds of visitors every hour. The only reason, according to villagers, more weren’t killed in the attack was an initial airstrike on an agricultural road 300 meters away from the market. After this strike, residents of the village feared the market would be next and began evacuating, nevertheless civilians were still killed and injured by the blasts. 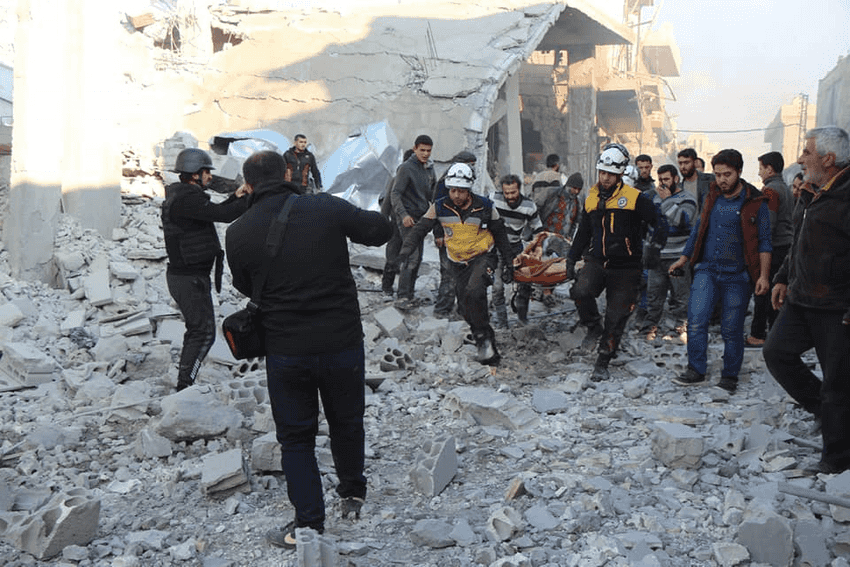 An image from the Civil Defense in Idlib of the damage to the market and the rescue effort.

A street market (35.695969, 36.505092) in northeast Balyoun was targeted and hit between 14:00 and 14:15 on Saturday December 7 2019 killing ten people and wounding thirteen others. According to images and videos uploaded to social media as well as witness testimony, an airstrike with two missiles hit the village. One targeted and struck the house of Abdul Mohsen Hammadi, killing five members of his family. The other missile hit near the village’s high school, which is about 30 meters away from Al Hammadi’s home. 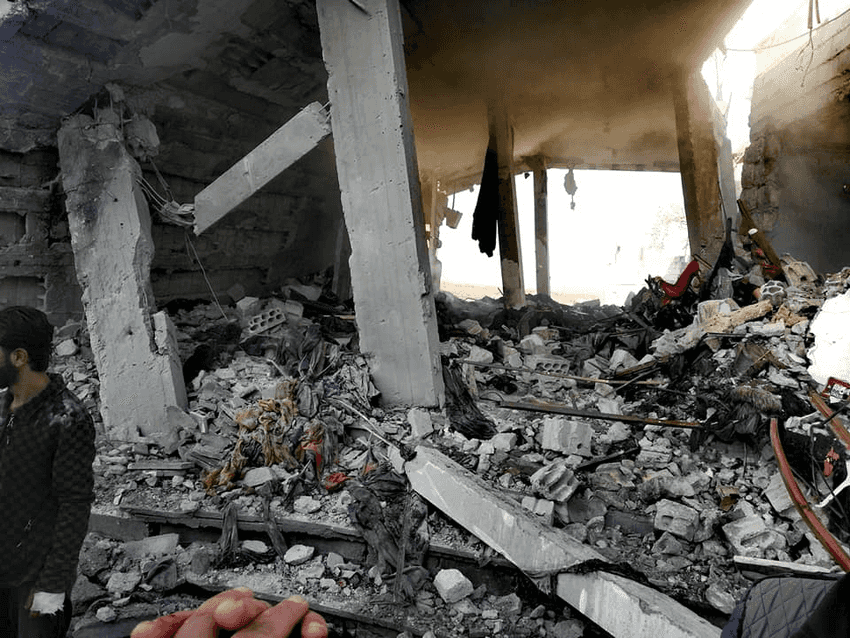 An image posted by Blyon Voice showing the damage to the market and its surrounding buildings from the attack.

The Syrian Archive investigation team collected two videos that show the moment of the airstrike on the market in Balyoun. 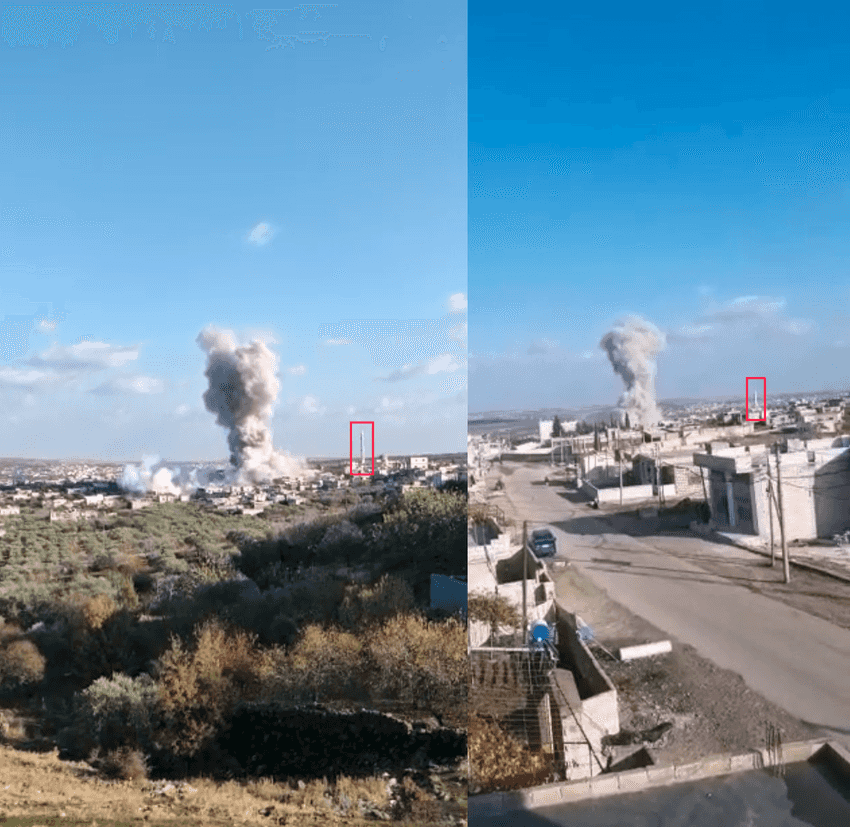 The first video was recorded on the western outskirts of Balyoun village. It shows distinct shadows that corroborate the time of attack as at around 14:00.

The geolocation of the video by the investigations team showing the moment of the attack.

The estimation of the time the video was recorded using the shadows shown in the video and the tool SunCalc. With this method, the investigations team was able to corroborate the time of the attack as at around 14:00.

The prayer times and calendar show the time of Asr prayer as close to the estimated time of the attack.

Showing the moment of the airstrike, the second video, taken from Telegram, was additionally recorded from the western side of Balyoun.

Flight observers in the video mention an aircraft flying over the village with an airstrike shown hitting the town. The Syrian Archive investigations team obtained the original video from a source and analysed the metadata to corroborate the time of the attack. 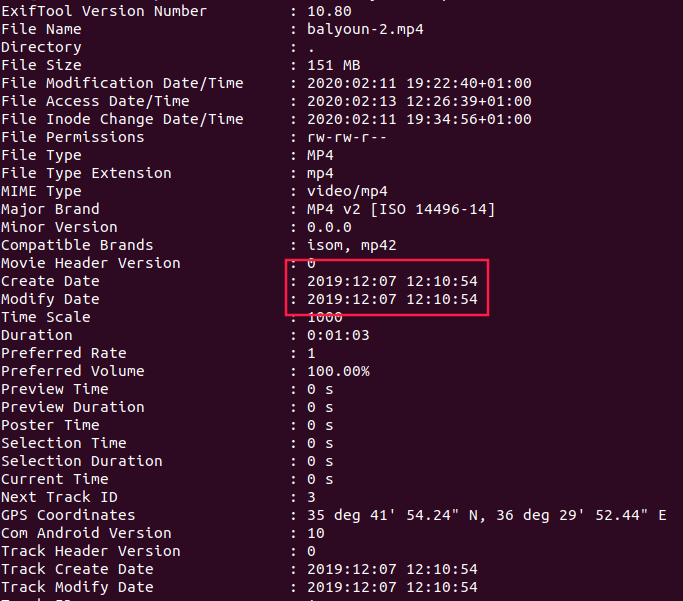 A screenshot of the second video’s metadata, which shows it was taken at around the time of the attack.

The creation date and time of the video according to metadata is 07/12/2019 at 12:10:54 GMT. With Balyoun’s time zone at GMT+2 , this corroborates reported times of the attack from witness testimony as well as shown in verified videos. Additionally, the coordinates (35°41’ 54.24” N, 36°29’ 52.44” E) provided in the metadata were confirmed by the investigations team through geolocation. 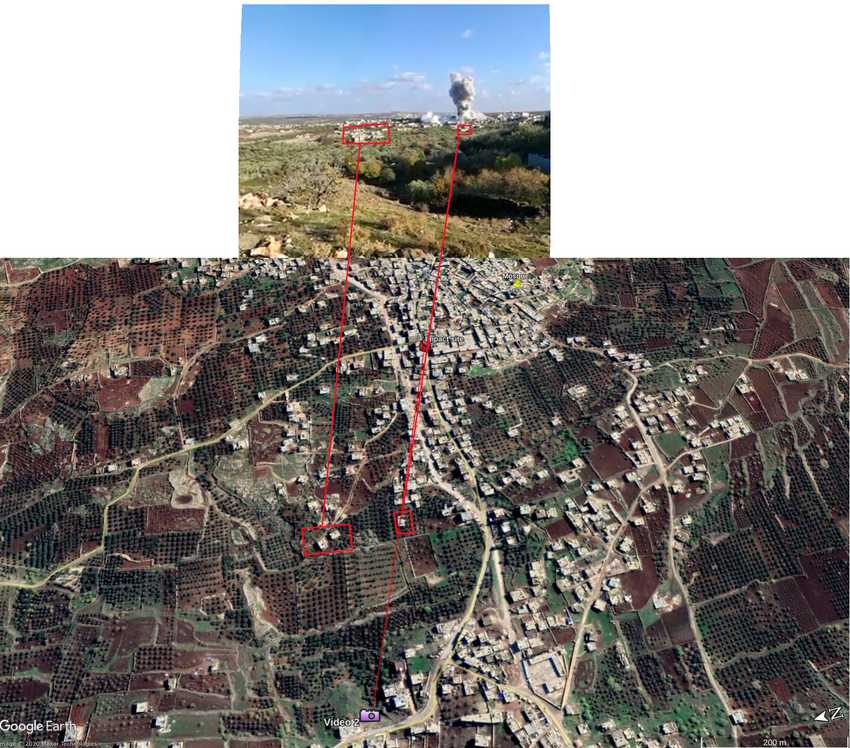 A geolocation of a still taken from the second video, which shows the moment of the attack. The video was taken from western Balyoun.

Further corroborating the time and location of the attack, Aram Media posted a breaking news alert at 14:04 on Twitter about the airstrike claiming the Russian Air Force as responsible for the attack. Shortly thereafter at 14:26, around fifteen minutes after the attack, the Facebook page Blyon Voice posted a video showing the moments at the market directly after the attack. This video as well as images and another video posted by the same page at 14:31 and 20:54 additionally feature the extensive damage to the shops and surrounding homes with rubble covering the streets and small fires sparked by downed power lines. Orient News’ Jamil Hassan, in a video report published at 14:35, additionally shows the fires and chaos directly following the attack. 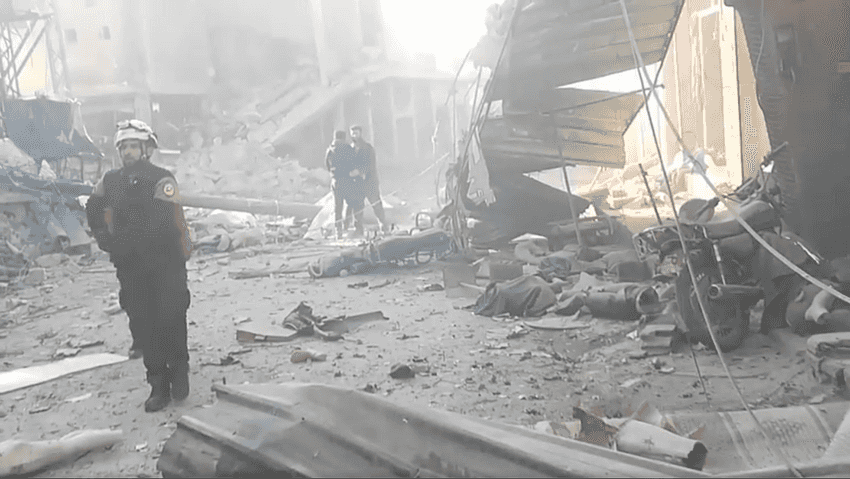 A still from a video taken directly after the attack and posted by Blyon Voice. 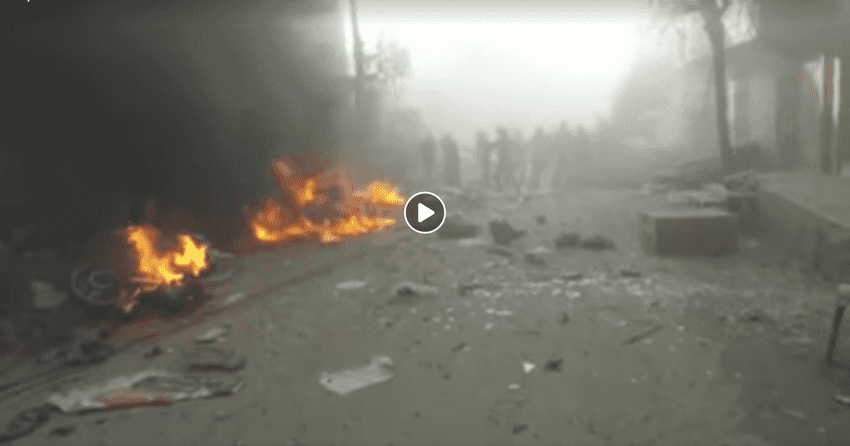 A still from a video posted by Orient News correspondent Jamil Al Hassan showing the immediate aftermath of the attack.

Posts evaluating the damage from directly after the attack were followed by videos and images posted hours after the attack showing the efforts to rescue and recover those injured and killed. Journalist and media activist Hadi Al Abdullah, for example, uploaded a video at 18:08 showing rescue efforts by the local Civil Defense teams to rescue civilians trapped under the market’s rubble. Additional videos uploaded by the Idlib Health Directorate and the Idlib Civil Defense itself show ambulances arriving at the scene of the attack as well as first responders rescuing and sending those injured to nearby hospitals. Moreover, at 17:44, around three hours after the attack, the Civil Defense released an initial assessment of nine killed and fourteen injured from the attack. 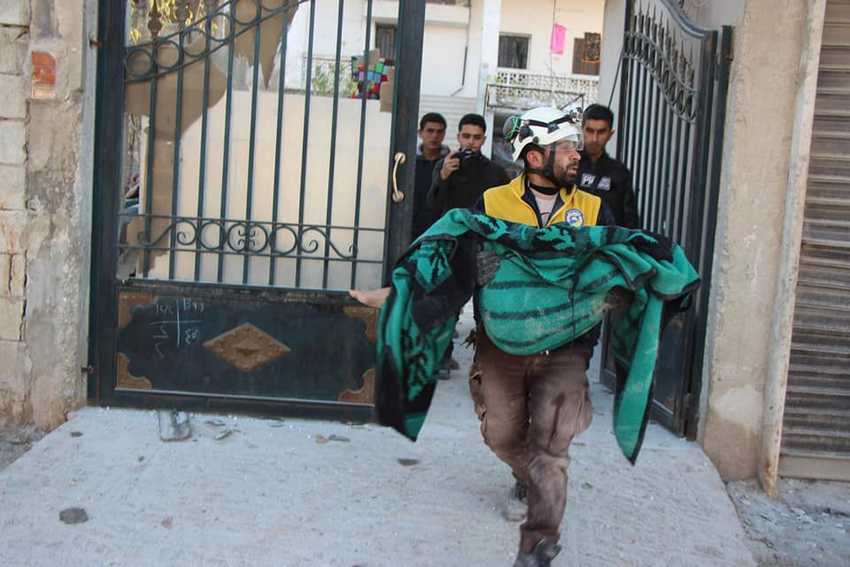 An image posted by the Syrian Civil Defense showing the rescue efforts after the attack.

One day after the attack on December 8, the Syrian Media Forum posted a video showing the destroyed market’s shops and kiosks. The video includes an interview with Ahmed Ismail, the owner of one of the shops in Balyoun, who describes missiles destroying the Al Hammadi home and the market further confirming that two missiles hit the area at around 14:00.

Damage to the Market and Surrounding Areas

Panorama image of the market after the airstrike sourced from Blyon Voice.

As described above, photos and videos found online capture the market minutes after the airstrike. Additionally, videos and photos taken by the investigations team a day after the attack show the serious damage to public property, shops, and homes surrounding the market. 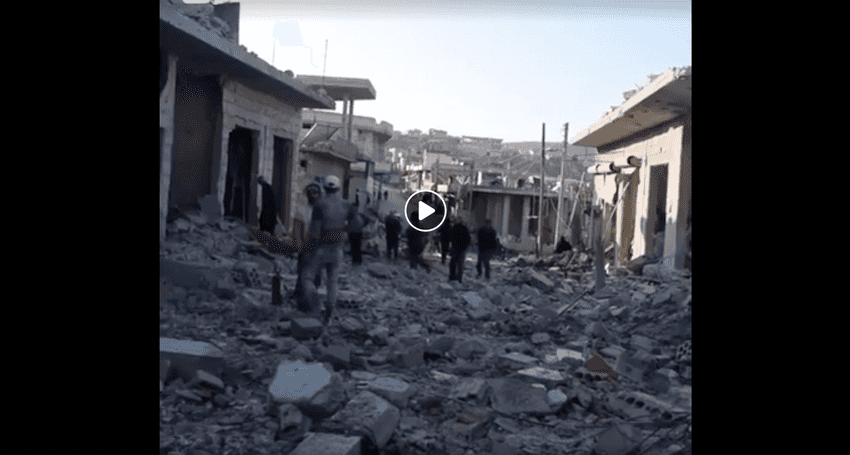 A still from a video posted by Mohammad Al Homsi showing the extensive destruction to the market and the surrounding areas. 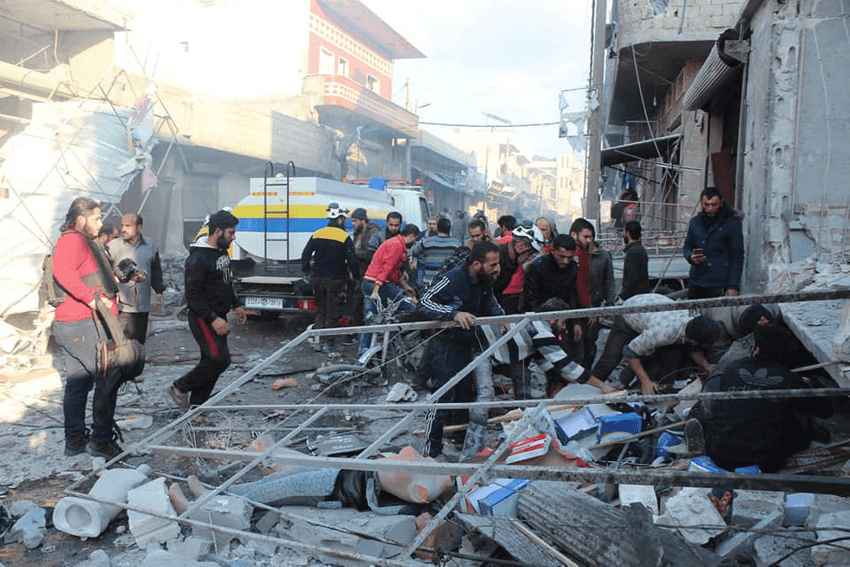 An image posted by the Civil Defense showing the destruction from the attack of stores and their products.

In posts by the Civil Defense, images and videos show extreme damage to the market and surrounding areas. The roofs of a number of buildings collapsed after the attack with water tanks broken on the ground, iron sun shades crumpled and made shrapnel, and shops themselves uprooted and destroyed. The burnt contents of shops and rubble from the surrounding buildings cover the floor of the market and its surrounding streets. Images and videos posted by Blyon Voice show similar damage of collapsed buildings covered in blood and downed electricity poles. 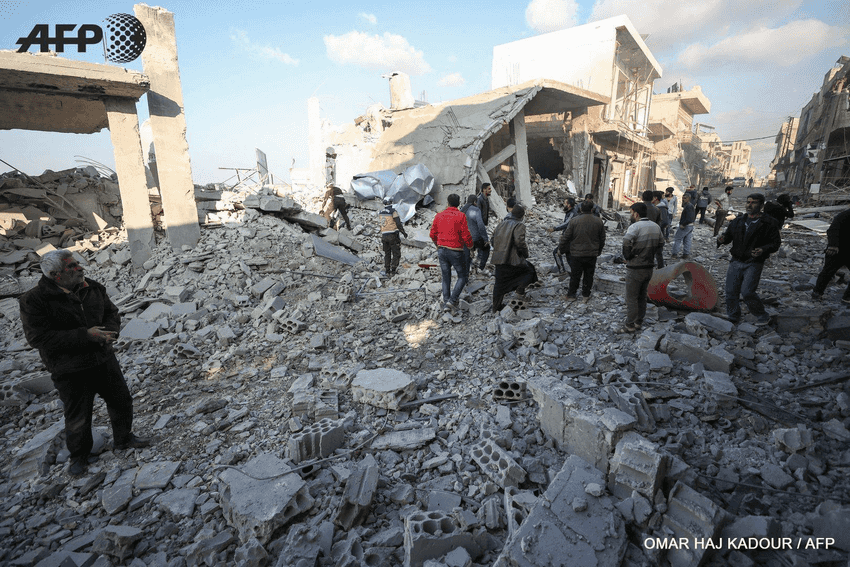 An image taken by Omar Haj Kadour of AFP showing the extensive damage to the market and its surrounding areas. 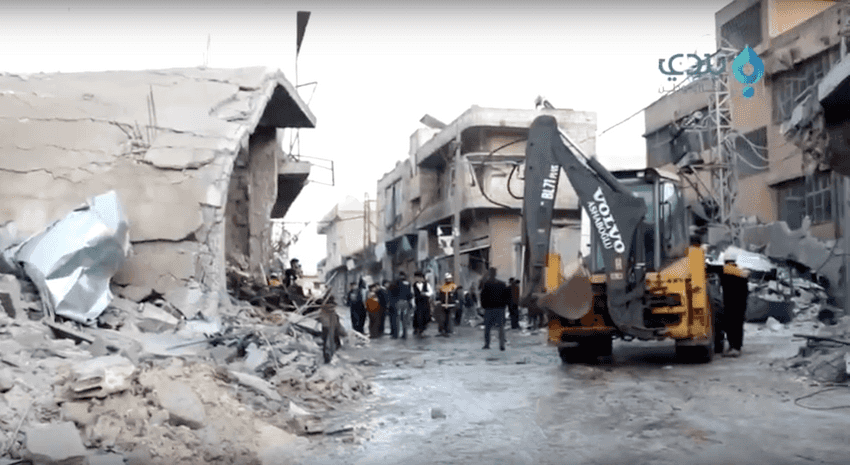 A still from a video uploaded by Baladi News showing the removal of rubble from the town’s streets.

Images published by the AFP show the destruction of buildings surrounding the market including several houses. Moreover, a video uploaded by Baladi News Network shows the clearing of stones, cement ceilings, and iron sheets covering the streets and market.

Following an analysis of the civilian media featured above, the Syrian Archive investigation team confirmed the impact site as well as the market buildings damaged as a result of the airstrike. With the attack taking place at the street marketin northeast Balyoun, the investigations team identified 5 distinct buildings that were severely damaged from the attack. The destruction of the small but populated village of Balyoun was extensive and devastating. It also proves testing for those who moved to the village seeking safety. 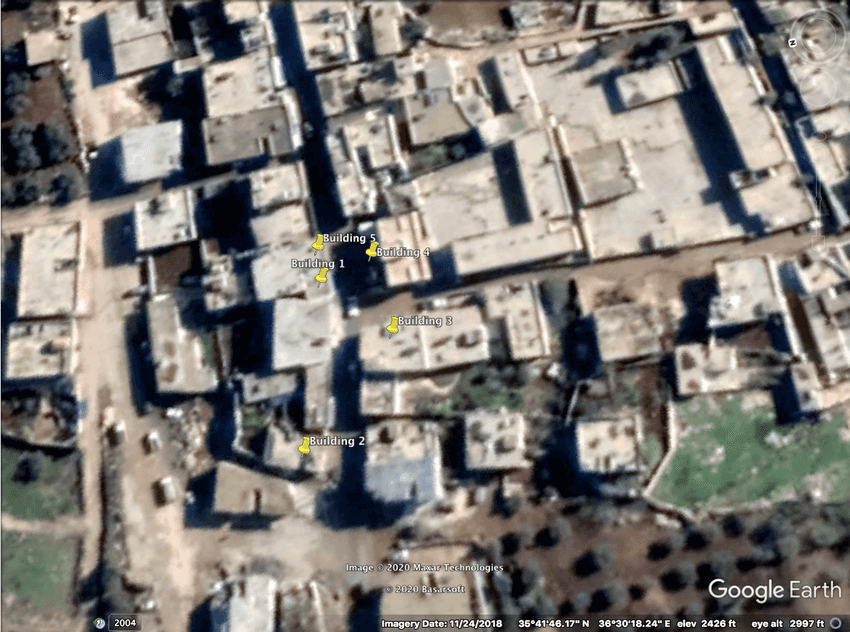 Satellite imagery taken from Google Earth showing the locations of the five damage buildings as identified by the Syrian Archive.

These images include open source media, photos taken by the investigations team, and satellite imagery from Google Earth showing the damaged buildings as identified by the Syrian Archive. 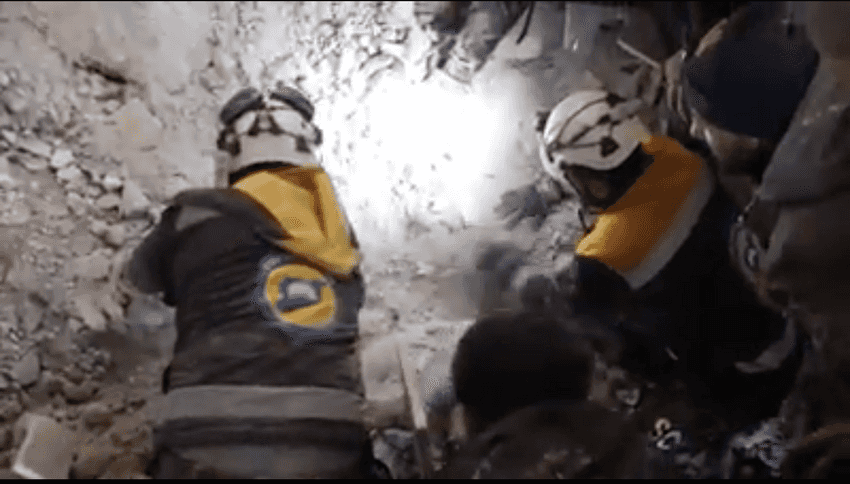 A still from a video uploaded by the Syrian Civil Defense showing the effort to rescue civilians stuck under rubble.

When documenting those dead and injured from the attack, the Syrian Archive’s investigations team corroborated the number and identity of those injured and killed by meeting with villagers and reviewing open source media. The team confirmed that ten were killed from the attack and thirteen were injured.

To provide a further layer of verification, the Syrian Archive cross referenced findings from open source media and images/videos taken by the investigations team with flight observation data from a spotter organization. Data for flights occurring briefly before, during, and briefly after the time of the attack (14:00 - 14:15) on December 7, 2019 around Idlib was closely analyzed.

Although this data matches media and posts on social media that purport the attack as committed by the Russian Air Force, no evidence available shows the direct involvement of the observed aircraft in the attack on Balyoun. Nevertheless, the presence of these aircrafts above the neighboring villages and towns at the time that the attack occurred increases the likelihood that the airstrike was carried out by the Russian Air Force.

As detailed in interviews conducted by the investigations team, verified open source media, and flight observation data, Balyoun market and its surrounding residential areas were attacked by an airstrike with two missiles on 7 Dec 2019 between 14:00 and 14:15. The missiles, according to testimony, hit the house of the Al Hammadi family near the market and a school around thirty meters away. The attack killed ten people and injured thirteen others. Because of the limited information available in open source investigations, the Syrian Archive was unable to definitively identify the perpetrators of the attack. However, flight observation data, witness testimony, and open source media indicate the Russian Air Force as potentially responsible for the attack.