Dataset of Verified Videos About Chemical Weapons Attacks in Syria

Dataset of Verified Videos About Chemical Weapons Attacks in Syria

Since the UN Security Council adopted Resolution 2118 three years ago, outlining the framework for the elimination of chemical weapons in Syria, and despite the Organization for the Prohibition of Chemical Weapons (OPCW) working to destroy chemical weapons owned by the Syrian government, chemical weapons continue to be used against civilians by government forces and ISIS.

The Syrian Network for Human Rights has identified 139 incidents in which chemical weapons have been used. In this report, the Syrian Archive provides visual documentation for some of these incidents. The updated chemical weapons database, with 392 newly verified videos, includes violations committed between December 2012 and September 2016.

First : Verifying the Source of the Video

The Syrian Archive has identified more than a hundred sources through following credible and verified social media accounts and channels of individual citizen journalists and larger media houses (e.g. YouTube, Facebook and Telegram). Many of those providing video documentation began to do so in late 2011 or early 2011 and have published their work in other credible media outlets as well.

Trusted sources report from different cities in Syria in order to spread news and information about violations occurring in their areas. The Syrian Archive works with field reporters, such as the Journalist Yasser Al-Haj, who began his career in 2012 in Aleppo and continues working until today.

The Syrian Archive also works with local and international international news agencies, human rights organisations, as well as the white helmet’s team, local field clinics and hospitals. Additionally, some video evidence analysed was sent to the Syrian Archive directly by verified reporters and has not previously been posted on social media platforms.

After verifying the video evidence and cross referencing it with other reports about the same incident, additional metadata is added to videos indicating items such as the type of weapon or chemical gas used.

Each video went through basic geolocation to verify that it has been captured in Syria. The Syrian Archive has additionally identified the province for most videos and the actual coordinates in some of them. This has been done by comparing reference points (e.g. buildings, mountains ranges, trees, minarets) with Google Earth satellite imagery, OpenStreetMap imagery and geolocated photographs from Panoramio.

In addition to this, the Syrian Archive has referenced the Arabic spoken in videos against known regional accents and dialects within Syria to further verify location of videos. When possible, the Syrian Archive has contacted the source directly in order to confirm the location, and the project has also consulted existing networks of journalists operating inside and outside Syria to confirm the locations of specific incidents.

The Syrian Archive has verified the date of capturing the video by cross referencing the publishing date on social media platforms (e.g YouTube and Facebook) with dates from reports concerning the same incident. Sources for reports used for cross-referencing include:

Third: Reports shared from the Syrian Archive’s network of citizen reporters on Twitter, Facebook and Telegram about the incidents.

[a] By government forces in Zabadiyah district of Aleppo on 10 August 2016.

[c] By government forces in Sukkari district of Aleppo on 06 September 2016.

The Syrian Archive has also collaborated with the journalists of Bellingcat in publishing two investigations about two of these incidents in Zabadiyah district and Marea city.

The Joint Initiative Mechanism (JIM) report provides an update on the activities up to 19 August 2016. It also outlines the concluding assessments of the Leadership Panel to date, on the basis of the results of the investigation into the nine selected cases of the use of chemicals as weapons in the Syrian Arab Republic.

Below are the nine selected cases outlined in the JIM report as well as verified visual documentation by the Syrian Archive team which supports the JIM report:

The Syrian Archive analysed the data through a map that has been created using the Syrian Archive database indicating which cities in Syria have documented video evidence of chemical weapons attacks. See below:

In the map presented above, video evidence occurs most often in Damascus suburbs in 2013, Kafr Zita in Hamah in 2014, Talmenes and Al-Tamanah in Idlib in 2014, Sarmin in Idlib in 2015, Talbisah in Homs in 2015 and Aleppo in 2016, coinciding with the chemical weapons attacks identified by JIM investigators. 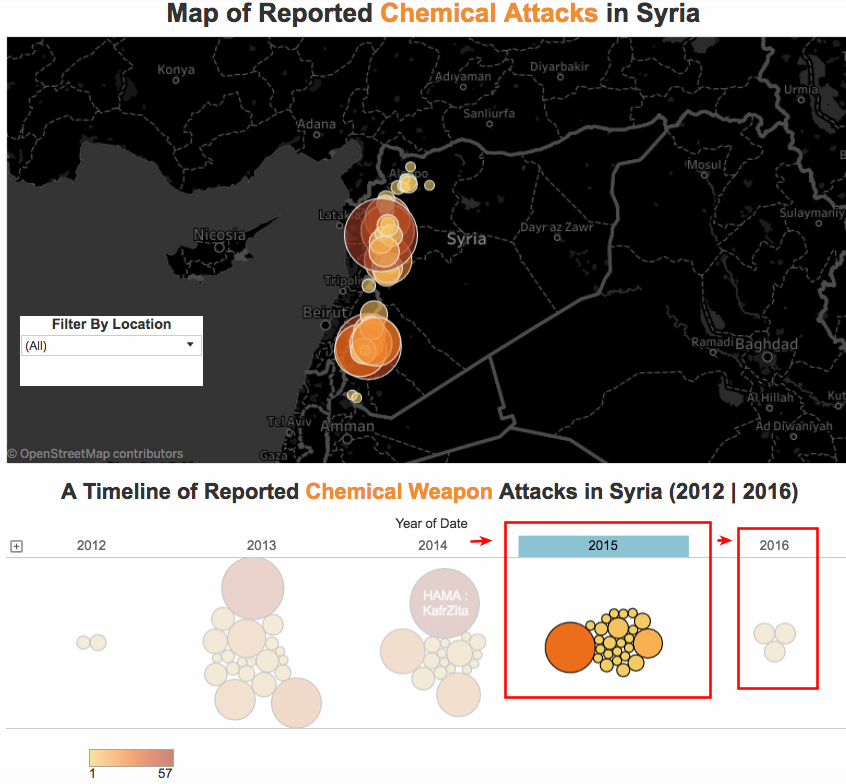 The Syrian Archive has additionally carried out a time-series analysis on its database, whereby the upload dates of video evidence are investigated. See below:

This analysis demonstrates that the most videos were uploaded on 21 August 2013, coinciding with the Sarin gas attack in Damascus suburbs. After this attack, the UN Security Council adopted Resolution 2118 (27 September 2013), the framework for the elimination of chemical weapons in Syria. The Syrian Network for Human Rights has identified 139 incidents in which chemical weapons were used by Syrian government and ISIS since the adoption of Resolution 2118, and since the OPCW’s announcement that it verified the destruction of 98% of chemical weapons declared by the Syrian government.\

The time-series analysis above demonstrates that the Syrian Archive has visual documentation of some of these incidents from 2012 until 2016.

The Syrian Archive has conducted a text analysis of the titles and descriptions of the392 verified videos of chemical weapons. A visualisation of text analysis is shown below: 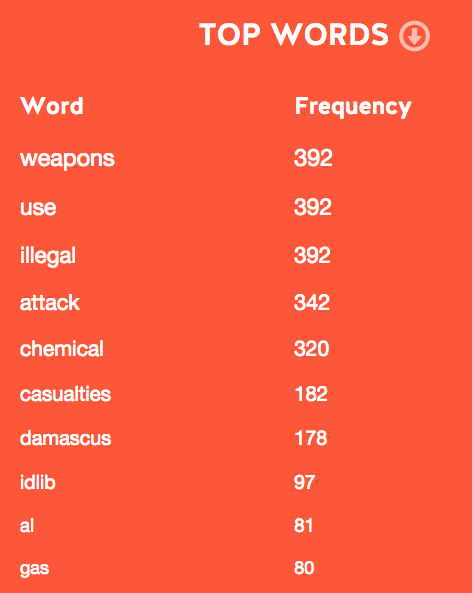 Based on the 392 visual documentation we have collected and verified, it appears that civilians are being attacked by chemical weapons despite the UN Security Council Resolution 2118which was adopted in 27/09/2013 and after the OPCW’s announcement that it verified the destruction of 98% of chemical weapons declared by the Syrian government.

For the aforementioned reasons, we reiterate the concerns of civil society organisations and urge the United Nations to use its means to stop the use of chemical weapons in the Syrian Conflict.

In order to provide the most complete and accurate information on chemical weapons attacks, we are always looking for new evidence to collect and add to the alleged chemical weapons video dataset. If you would like to send us a video which is not on the dataset please reach us at info\@syrianarchive.org.

If you have new information about a particular event; if you find an error in our work - or if you have concerns about the way we are reporting our data - please do engage with us. You can reach us at info\@syrianarchive.org.