The Syrian Archive is a Syrian led-initiative striving to promote sustainable peace and respect for human rights within Syrian society through facilitating justice and accountability efforts. This includes evidence gathering and documentation of incidents; the acknowledgment that war crimes and human rights violations have been committed by all parties to the conflict; the identification of perpetrators to end the cycle of impunity; and the development of a process of justice and reconciliation.

Through collecting, verifying, curating and investigating visual evidence, the Syrian Archive aims to preserve data as a digital memory to establish a database of human rights violations, and to act as a tool for legally implementing justice and accountability efforts as concept and practice in Syria.

Since its founding in 2014, the Syrian Archive have collaborated with organisations including Human Rights Watch (HRW), Amnesty International, Bellingcat and various agencies of the United Nations (UN), specifically the Independent International Commission of Inquiry on the Syrian Arab Republic.

The following visual evidence dataset complements and supports recent efforts by different groups which have been assisted by the Syrian Archive to report human right violations in Aleppo between July and Dec 2016. Those efforts include:

In this report, the Syrian Archive will describe and investigate a new visual evidence dataset of 1748 videos of human rights violations in Aleppo city and the surrounding suburbs in the period between July 2016 and Dec 2016.

While attacks and violations have been committed by all parties including the International coalition and Turkish forces, the visual evidence shows that the Syrian and Russian forces were responsible for the largest amount of human rights violations in Aleppo city and its suburbs during this period. These violations include:

The Syrian Archive has divided its collection and archival methodology into five distinct steps: 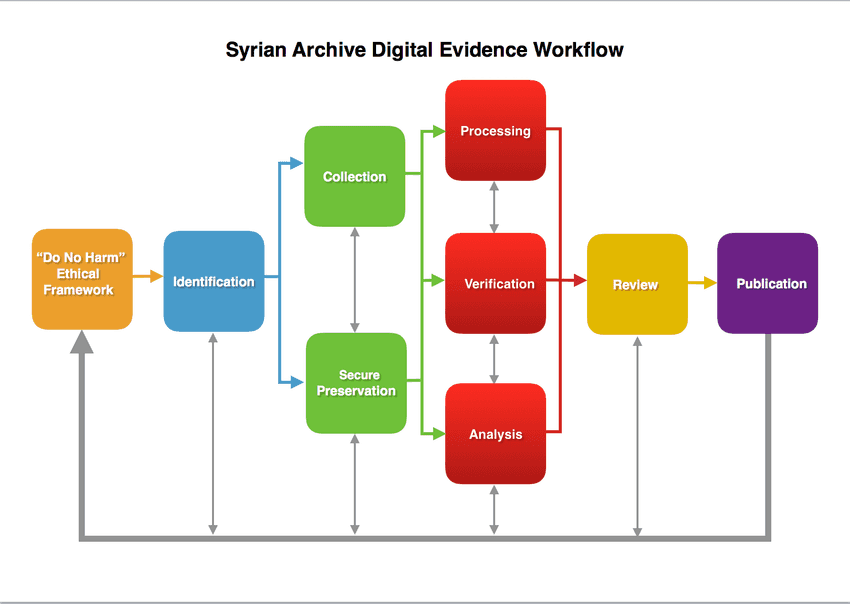 The Syrian Archive has identified more than three hundred sources through following credible and verified social media accounts and channels of individual citizen journalists and larger media houses, such as. YouTube, Facebook and Telegram. Many of those providing video documentation began to do so in late 2011 or early 2012 and have published their work in other credible media outlets as well. It is important to note that many if not all of these sources are partisan, and thus require caution with regards to their claims.

Trusted sources report from different cities in Syria in order to spread news and information about alleged violations occurring in their areas. The Syrian Archive works with field reporters like Yasser Al-Haj, a journalist from Aleppo who began his career in 2012 and continues working until today.

The Syrian Archive also works with local and international news agencies, human rights organisations, as well as the Syrian Civil Defense (more colloquially known as the White Helmets) team, local field clinics and hospitals. Additionally, some video evidence analysed was sent to the Syrian Archive directly by reporters and was not previously been posted on social media platforms.

The Syrian Archive has established a trusted team of citizen journalists and human rights defenders based in Syria who provide additional information used for verification of content originating on social media platforms or sent from sources directly.

The Syrian Archive organizes the preserved materials by cataloging them according to the categories used by the Independent International Commission of Inquiry on the Syrian Arab Republic, set up by the UN OHCHR in 2011. These categories include:

Additional value is added to the material by recording as much metadata and chain of custody information as possible. The recording of location, date and origin of video evidence are done in order to contextualise the material and help users identify and understand when, where and what happened in a specific incident. The full metadata schema can be seen in this section.

To ensure that the original content is not lost due to removal on corporate platforms, visual evidence from credible social media channels is scraped and stored securely on external backend servers before it goes through basic verification. Videos are hashed with (SHA-256) and timestamped to ensure they are not tampered with after scraped from social media platforms or taken directly from sources.

These five steps will be discussed in further detail.

Metadata from visual evidence sent directly or scraped from social media websites is parsed and aggregated using a predefined and standardised metadata scheme, as described above. This prepares the visual evidence for initial verification. Some of the metadata includes: Upload date and time, uploader’s name, title and description of the video, location and device used to upload the video.

Step 2 : Verify the source of the video

Step 3 : Verify the location of the video

Each video has gone through basic geolocation to verify that it has been captured in Syria. More in-depth geolocation was conducted in order to verify that videos from this dataset were captured in Aleppo. This has been done by comparing reference points (e.g. buildings, mountains ranges, trees, minarets) with satellite imagery from Google Earth, Microsoft Bing, and DigitalGlobe, as well as OpenStreetMap imagery and geolocated photographs from Panoramio. In addition to this, the Syrian Archive has referenced the Arabic spoken in videos against known regional accents and dialects within Syria to further verify location of videos. When possible, the Syrian Archive has contacted the source directly in order to confirm the location, and cross-referenced video evidence by consulting existing networks of journalists operating inside and outside Syria to confirm the locations of specific incidents.

Step 4 : Verify the dates in which the video was filmed and uploaded

The Syrian Archive has verified the date of capturing the video by cross referencing the publishing date on social media platforms (e.g. YouTube and Facebook) with dates from reports concerning the same incident. Sources for reports used for cross-referencing include:

After videos have gone through the basic verification process, they are backed up and uploaded to the Syrian Archive website where they are made publicly available in a free and open-source format.

In some cases, the Syrian Archive is able to conduct in-depth online open source investigations. Videos and other open source materials shared online are used in order to understand the incident and verify the veracity of claims made about incidents. Time and capacity limitations means not all incidents are able to be analysed in-depth, however by developing a replicable workflow it is hoped that others can assist in these efforts of investigate other incidents using similar methods. The methodology for in-depth verification is highlighted in several of the case studies included later in this report.

Most video documentation provided in this report refers to crime-based evidence. That is, evidence connected to the scene of the crime rather than the person who commits an offence. Further research is needed to unravel and connect the linkages between crime and perpetrator based evidence.

Nonetheless, it is hoped that this research provides an evidence base for future investigations from civil society groups, journalists, human rights researchers, and international human rights organisations and governmental bodies. If you are interested in using our database for future human research, please do get in touch. You can reach us at [info@syrianarchive.org][1].

The Syrian Archive strives for accuracy and transparency of process in our reporting and presentation. That said, it is recognised that the information publicly available for particular events can at times be limited. Our video datasets are therefore organically maintained, and represent our best present understanding of alleged incidents.

If you have new information about a particular event; if you find an error in our work - or if you have concerns about the way we are reporting our data - please do engage with us. You can reach us at info@syrianarchive.org.

Summary of Findings - Eyes on Aleppo