Background of the Hospital:

The hospital was shutdown in 2016, a year after opening, yet was reopened in 2017 and is supported by the Aleppo Health Directorate and the UK based development and relief organization Human Appeal.

The hospital, specializing in caring for women and children, serves the 350,000 in the surrounding villages and countryside.

According to Human Appeal, the hospital in the past eight months has served 115,389 Syrians while facilitating an additional 1,752 child births. Additionally, between January and the end of August 2019, the hospital has provided vaccines to 9,988 children under five years old, examined around 2342 women and children, and provided preventative feeding services to 21,419 children. 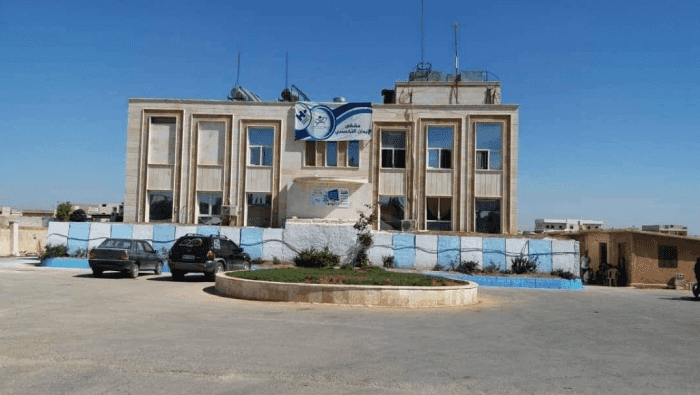 An image of the hospital before the attack from Baladi News

According to Dr. Hussein Al Ahmad, director of Al Iman hospital, the hospital services 200 births per month with an average of 30 children placed in incubators per month. Interviewed by the investigations team, Al Ahmad reported the hospital receives an estimated 20 medical cases with women and 40 with children. The hospital reportedly administers 100 vaccinations per day.

Serving the large population in its surrounding areas, the hospital holds 29 beds and has 115 staff members. The facility houses a number of departments including a pediatric clinic, an incubator ward, a laboratory department, a pharmacy, a malnutrition treatment center, a women’s clinic, ambulances, and ward, an obstetrics and caesarean section department, a gynecological surgery ward, and a department of radiology for children. 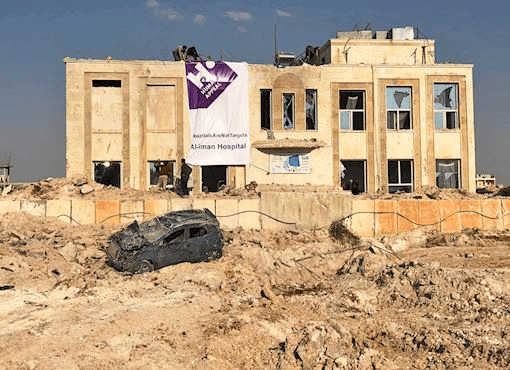 An image from Human Appeal of Al Iman Hospital after the attack.

Serving a diverse but remote population, Al Iman in the western countryside of Aleppo in the village of Urem Al Kubra. Surrounded mostly by agricultural land, the hospital is far from any military targets with its surroundings quite empty for over 2 kilometers. This indicates its deliberate targeting. 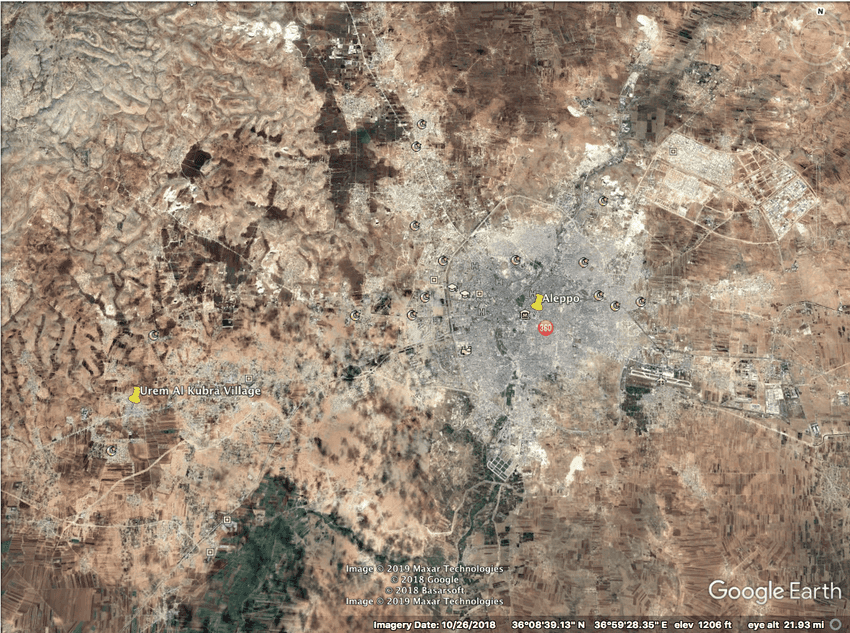 Google Earth Satellite imagery showing Aleppo on the right and the Urem Al Kubra village on the left.

With the assistance of the investigations team, the hospitals location was corroborated using satellite imagery. 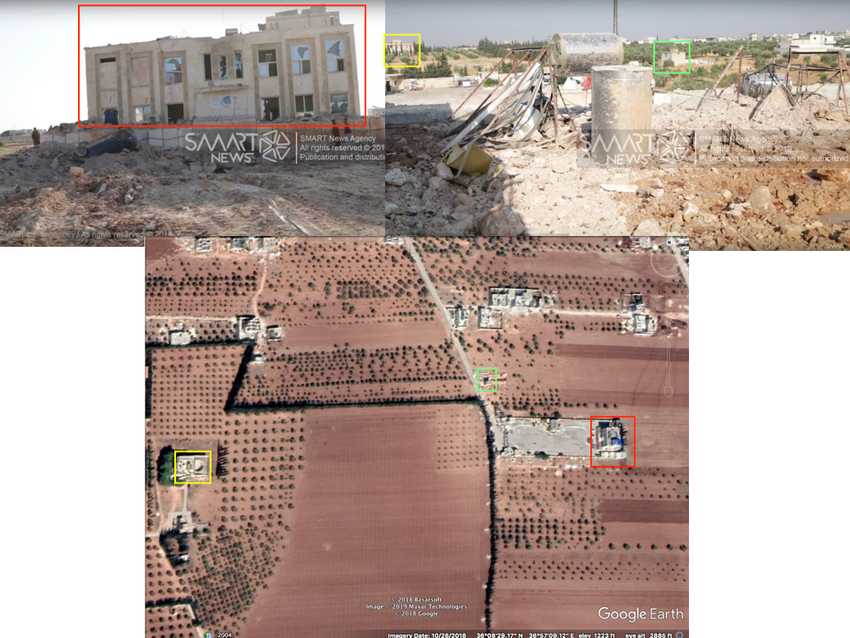 The buildings shown in Google Earth satellite imagery match what is shown, in this case, in a SMART News video report on the attack.

Previous Attacks on the Facility

Images of the damage from the August 2016 attack posted on Facebook by the hospital.

Al Iman Hospital experienced another attack on June 28th 2019. Human Appeal reported an attack on the facility by tanks which forced the hospital out of service requiring its pativideoents to be transferred to neighboring medical facilities. No citizen media was found showing this attack. Nevertheless, these previous attacks on Al Iman hospital as well as the attack in August 2019 indicate and corroborate a direct and deliberate targeting of the facility.

Confirmed by interviews conducted by the investigations team as well as online open source media, Al Iman hospital was directly targeted by six high explosive rockets that hit the hospital’s main courtyard and generators cutting it off from its necessary infrastructures like oxygen and electricity. Because of this attack, the hospital was forced out of service.

Hospital doctors and staff, the Syrian Civil Defense, and local news sources, confirmed the targeting of hospital, which is located within the de-escalation zones and lands under the ceasefire agreement said to be implemented at 6 AM Saturday, August 31st 2019. Al Iman hospital was directly and deliberately targeted by fixed-wing aircrafts just five hours before this agreement took effect. 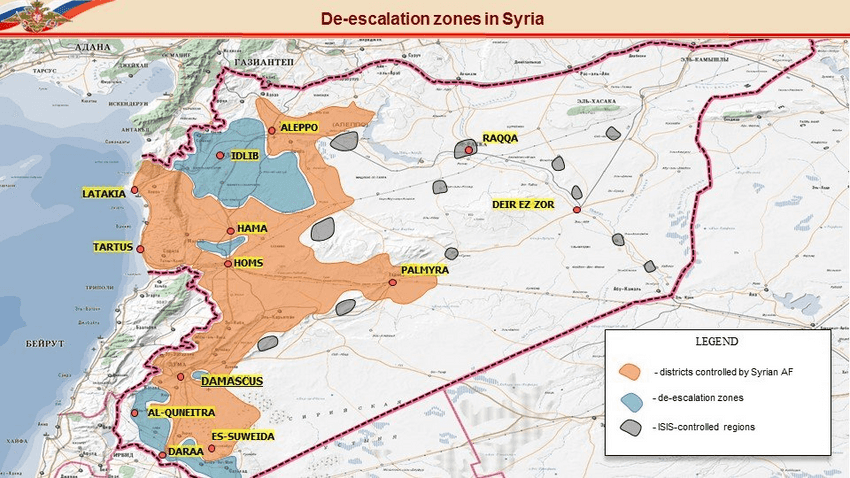 A map of the Deescalation Zones agreed to by Russia, Turkey, and Iran in May 2017.

Occurring at around 1 - 1:30 AM, the attack resulted in six injured including three children in incubators, two medical staff, and a woman accompanying her child. The hospital staff and others who were injured were immediately transferred to nearby hospitals by the Syrian Civil Defense. Fearing other airstrikes, those in the hospital fled into the agricultural land surrounding the hospital. The hospital, as discussed in the next section of this investigation, was severely damaged internally and externally with two cars for medical staff and the hospital generator destroyed from the attack.

In an interview with the investigations team, Dr. Mustafa Barakat, medical director for Human Appeal, confirmed that an attack on Al Iman hospital occurred at 1 AM which caused serious damage to the hospital completely pushing it out of commission. Dr. Barakat, in congruence with images and videos taken after the attack, described the hospitals infrastructure (of generators and ambulances) as completely destroyed with windows and incubators broken and the operating room out of service. According to the director, the strikes on the hospital lasted for around half an hour. Shortly after the first missile hit the hospital, patients and medical personnel evacuated to the basement. 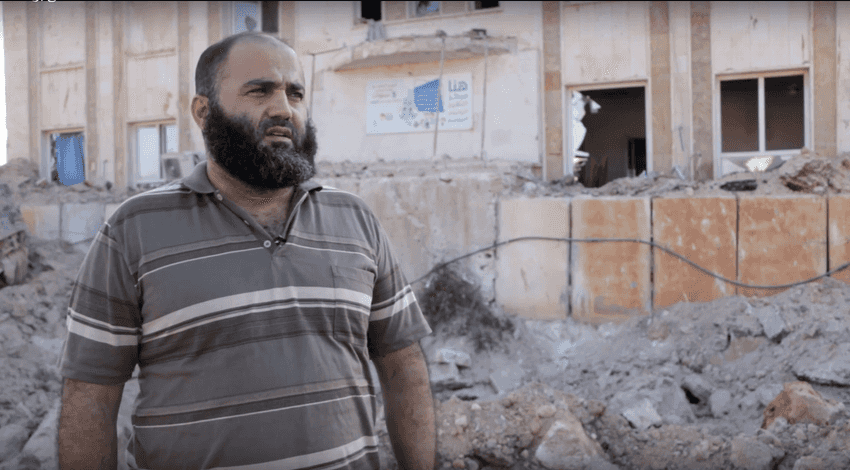 Ismail Barakat, one of the staff in the hospital during the attack, reported to the investigations team that around 100 patients and visitors were in the hospital at 1:00 AM. They were evacuated to the basement quickly after the first strike which, according to Ismail Barakat, occurred between 1:00 - 1:15 AM. Omar Al Sharif, another hospital staff member who witnessed the attack, confirmed that the facility was attacked beginning at 1 AM with six missiles.

A large number of local news sources reported on the attack further confirming its time as well as its extent of damage on the hospital. The Syrian Civil Defense, also known as the White Helmets, published photos on their Facebook page at 2:31 AM, an hour after the attack, of the damage done to the hospital from the airstrike and its victims.

These photos were followed by a video posted on Facebook and Youtube at respectively 11:06 AM and 11:04 AM showing the moment of shelling, the arrival of Civil Defense teams, and the evacuation patients in the hospital. The video begins from the moment the first responders arrive at the hospital further confirming the time of the attack and the extent of its damage. An additional video posted by the Civil Defense at 12:53 PM features an interview with a woman who witnessed the attack.

In an interview with the investigations team, Omar Jamal Ibrahim, a Civil Defense Center volunteer dispatched to the hospital, confirmed that the Civil Defense Teams were attacked two times while evacuating patients and sending those injured to nearby hospitals. The double tap attacks occurred during the first evacuation of the injured and medical personnel to neighboring hospitals and second when evacuating others.

In regards to local media, at 01:30 AM the Urem Al Kubra Media Center published an alert on its Facebook page of an attack on the village further confirming the early morning time of the attack. Nine hours after the attack at 10:25 AM, activist Feras Mwalla posted photos showing the damage to the hospital from the airstrike. The local news source Halab Today posted a video on youtube at 10:25 AM reporting on the attack.

An image posted on Facebook by media activist Feras Mola from shortly after the attack.

Beginning in the afternoon of the day of the attack and the days following the incident, organizations both in and outside of Syria reported on the hospital attack with some claiming it was committed by Russian forces. Macro Media Center published a video of the damage from the airstrikes on August 31st 2019. This was followed by a video from the Syrian Press Center showing the damage from the attack as well as interviews with hospital personnel.

Lastly, Human appeal released a statement on its website of the attack detailing the serious damage done to the hospital and the injuries suffered by victims of the attack.

Analysis of the Damage: 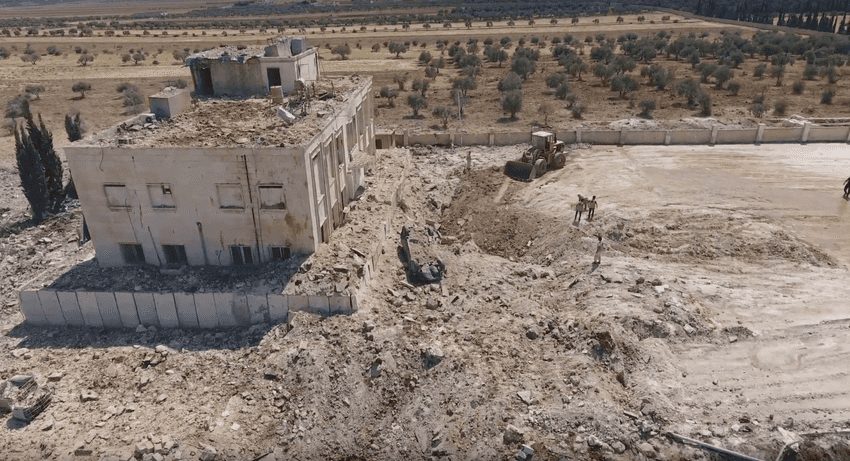 A still of Al Iman hospital from above after the attack shown in a video report uploaded onto YouTube by the Syrian Civil Defense.

The internal and external damage suffered by the hospital from the attack rendered the facility’s rooms and infrastructure unusable pushing it fully out of service.

The airstrike most dramatically affected the outside of the hospital crippling its necessary infrastructures as shown in the photos taken by the investigations team below. With the airstrike landing 3 meters away from the hospital’s primary building, the hospital’s main paved courtyard, which stood towards the front of the hospital, was completely destroyed with its distinctive roundabout now nonexistent. Alongside the front courtyard and entrance itself, two cars belonging to the hospital were flipped and destroyed.

On the sides of the hospital, generators for electricity and oxygen were irreparable after the attack. 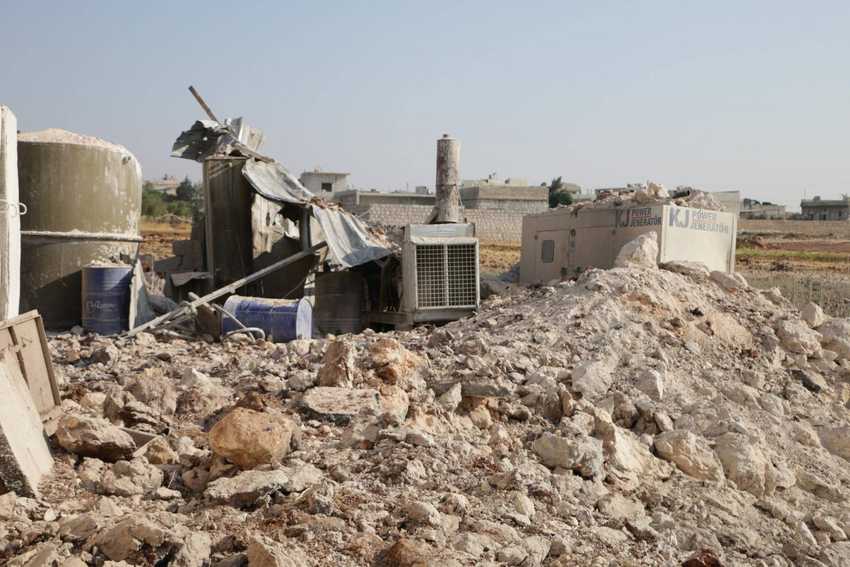 Images taken by the investigations team of the hospital’s oxygen and electricity generators after the attack.

Additional footage posted on YouTube by the Syrian Press Center features the roof of the hospital covered in rubble as well as the damage to the hospital’s ambulance. This video as well as images provided by the investigations team features the craters from the airstrikes, which surround the hospital. 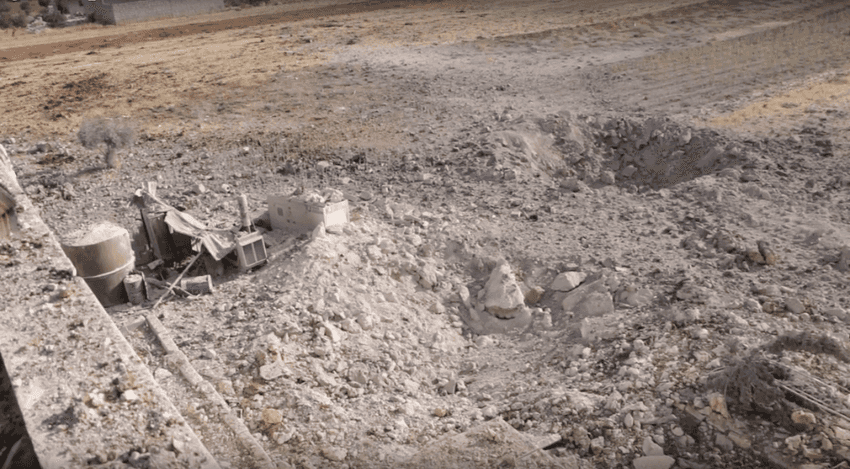 An image taken by the investigations team of craters from the airstrike near the hospital’s generators.

The facility is left standing only because the airstrike hit the soil which absorbed some of the shock of the explosions. Nevertheless, the windows, doors, and rooms of the hospitals were left smashed and shattered after the attack.

Internally, as shown in the images from the investigations team, a large number of machinery and departments were damaged as a result of the attack. As described in interviews, images show a damaged incubator room confirming reports of two of the ten incubators as out of service with others significantly damaged. 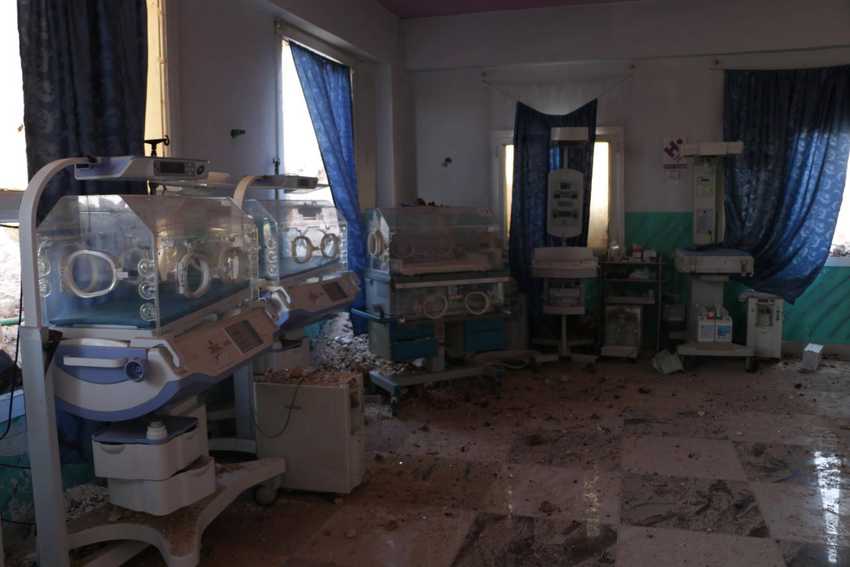 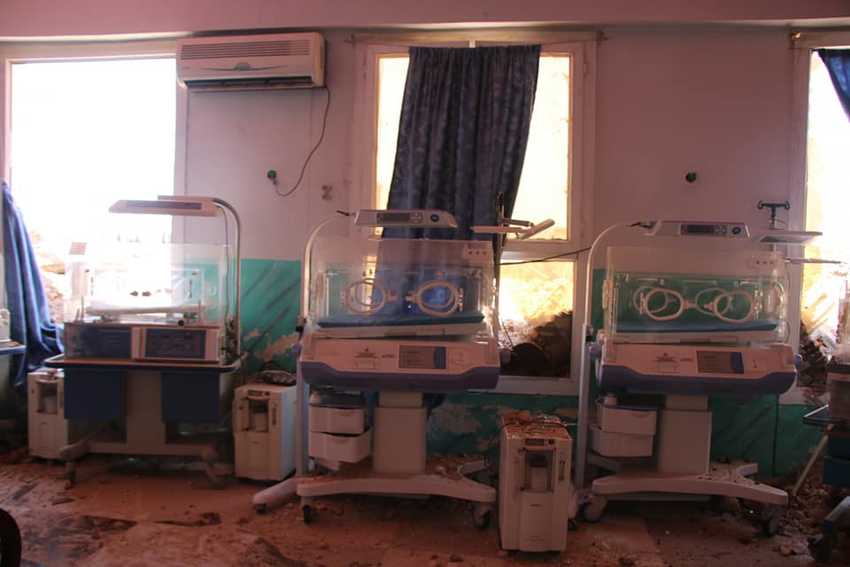 Images taken by the investigations team of the hospital’s child incubator ward.

Footage captured by the investigations team also shows other rooms of the hospital as damaged and unsuitable for treating patients. 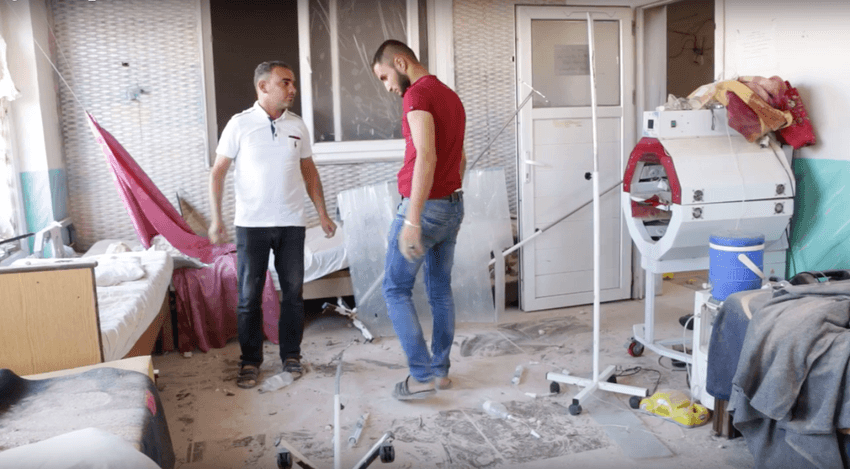 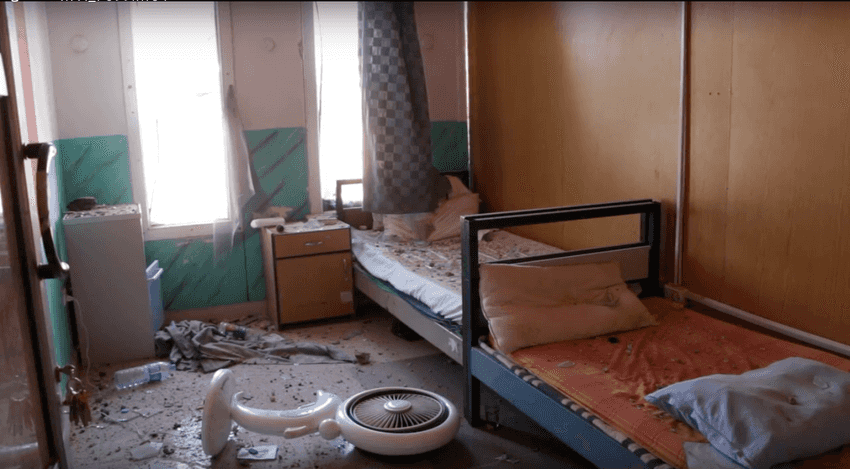 Stills from footage taken by the investigations team of patient rooms in the hospital. 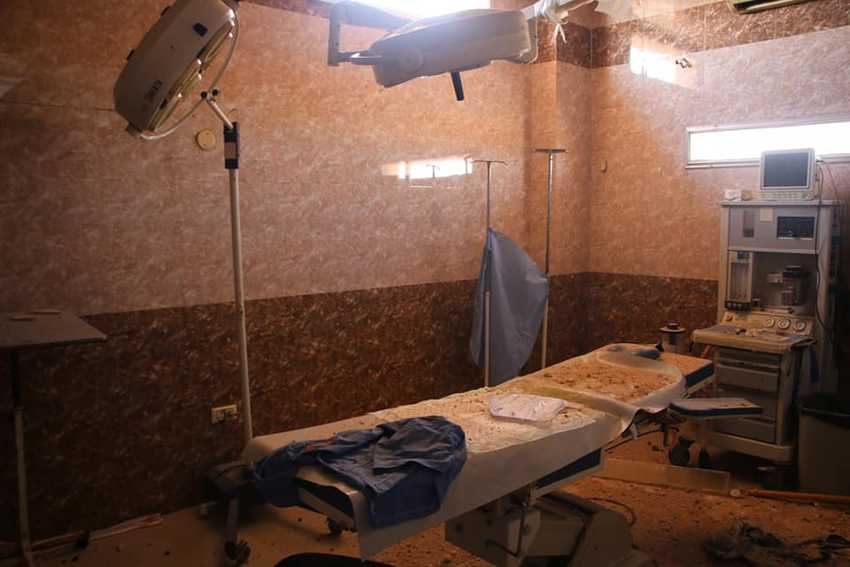 An image taken by the investigations team of the operating room in the hospital.

To provide a further layer of verification, the Syrian Archive cross referenced findings from the open source media above and the media from the investigations team with flight observation data from a spotter organization. Data for flights occurring before and after 1:00 - 1:30 AM around Idlib, Aleppo, Lattakia, and, more specifically, Urem Al Kubra was closely analyzed.

Although this data matches claims by human rights organizations that the attack was committed by the Russian Air Force, there is no direct evidence available that one of the observed aircraft was involved in the attack on Urem Al Kubra. Nevertheless, the presence of aircrafts above the village and its neighboring towns increases the likelihood that an air attack occurred on the hospital during the times shown and corroborated by open source media and reported on by the Syrian Archive’s investigations team.

Through documentation and interviews conducted by the Syrian Archive’s investigations team, an analysis of online open source media, and flight observation data, the Syrian Archive is able to confirm that Al Iman Hospital in Urem Al Kubra was attacked at around 1:00 - 1:30 AM on August 31st 2019. The attack forced the facility, supported by Human Appeal, out of service and resulted in six people injured. Given the limitations of the investigation, the Syrian Archive is unable to confirm the perpetrators of the attack although statements by witnesses attribute the attack to the Russian Air Force.