This section briefly discusses the focus of the report as well as the Syrian Archive’s methodology.

On December 22, 2019, citizen journalists and news agencies reported that two to four civilians were killed by an airstrike, which hit a tractor and a small van leaving Maraat Al Numan on the Damascus-Aleppo International Highway. This strike was captured in a video originally posted by ANNA News, which showed a number of Syrian and Russian government airstrikes in southern Idlib.

Syrian Archive conducted an investigation into the incident looking specifically at when, where, and how it occurred.

This investigation consists of two components:

Examining all information available on the strike, the investigations team developed an understanding of the incident and potential parties responsible. 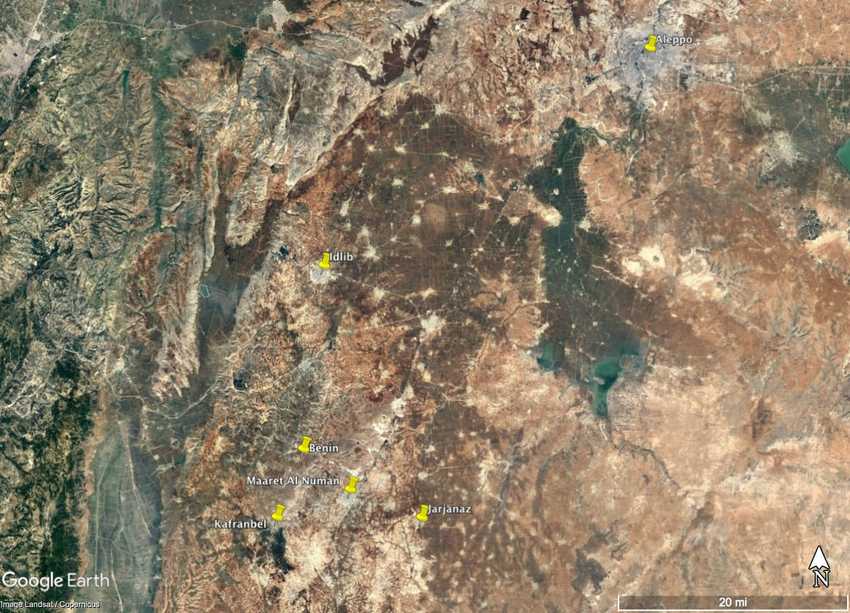 Maaret Al Numan lies 30 km south of Idlib city in the center of the Idlib governorate. In late 2019, the town increasingly became a target of airstrikes, which killed civilians and damaged vital infrastructure. As these airstrikes intensified, civilians fled north out of Maaret Al Numan. Airstrikes, allegedly from Russian or Syrian government warplanes, frequently hit the cars of civilians leaving the town. This investigation focuses on one of these airstrikes on December 22, 2019.

This section examines the airstrike on civilians leaving Maaret Al Numan as well as Syrian Archive’s verification process for videos and images found online allegedly showing the aftermath of the strike. 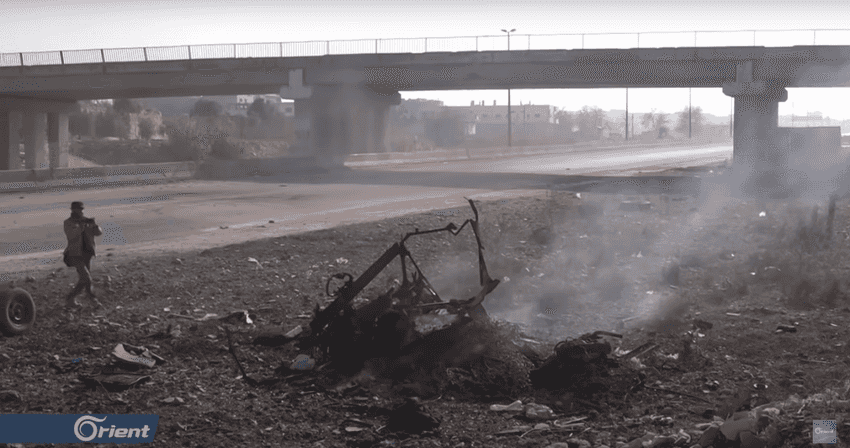 A still from an Orient News video report on the incident showing pieces from one of the two vehicles destroyed in the airstrike.

Catalogued and preserved by Syrian Archive, posts on social media first alerted of an airstrike on a road leading out of Maaret Al Numan after 12:30, the alleged time of the incident. First at 12:58, Step News Agency reported of an airstrike, allegedly by the Syrian regime, on cars leaving the town. In the hours after the alleged time of the incident, posts on Twitter and Facebook additionally reported of an airstrike hitting and killing civilians on a highway near Maaret Al Numan. Multiple posts blamed the Russian government for the airstrike. 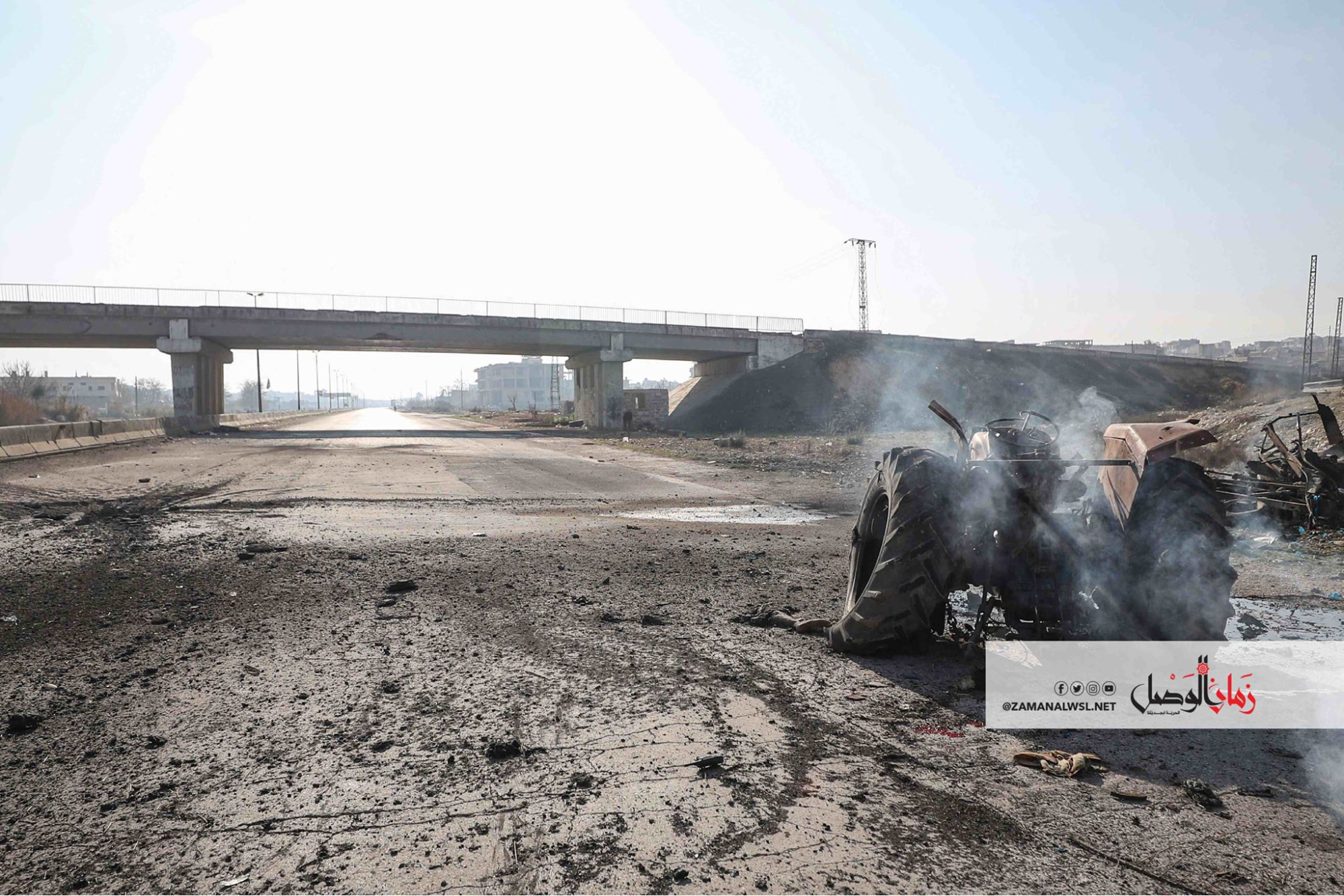 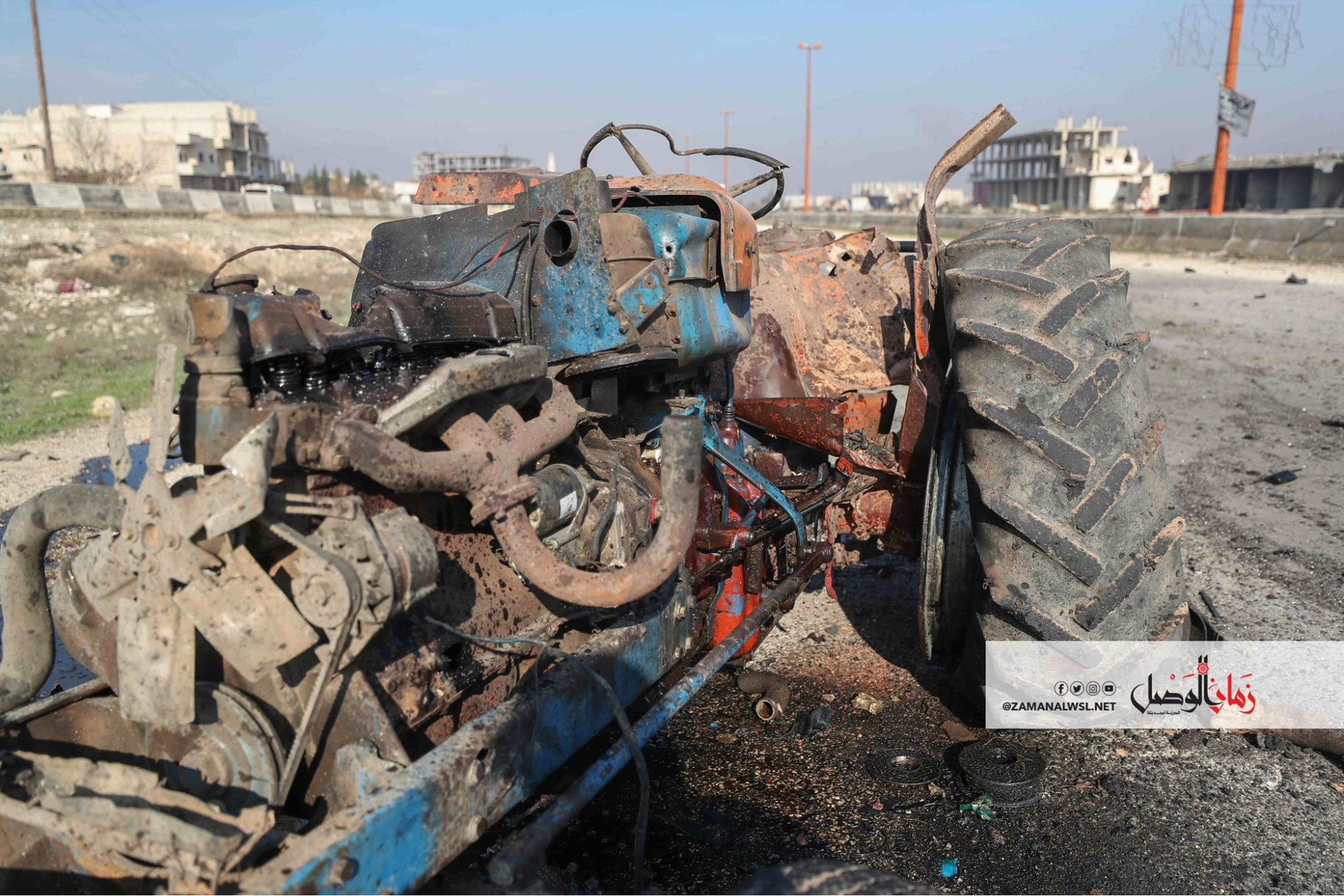 Images published by Zaman Al Wasl of the impact site including a tractor destroyed in the strike.

Over an hour after the incident, footage was posted by Zaman Al Wasl showing the aftermath of the strike. The video shows a destroyed tractor and car as Civil Defense volunteers in the background attempt to recover victims of the blast. Zaman Al Wasl claims the Russian Air Force is responsible for the incident. 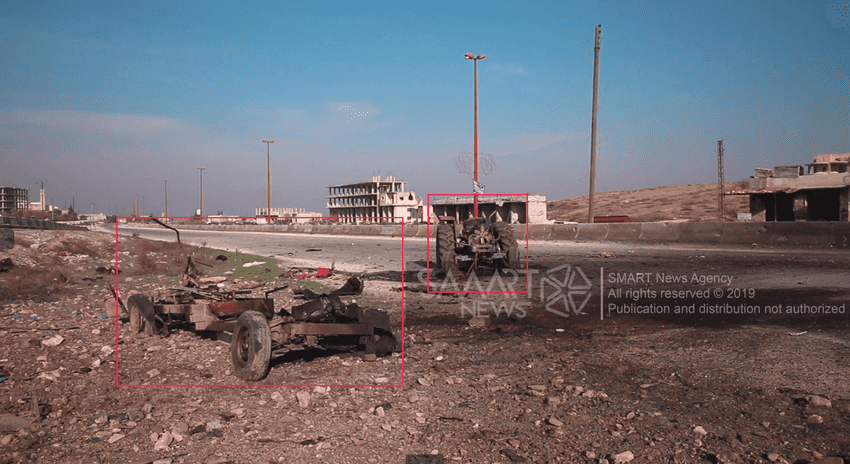 A still from a video posted by SMART News showing the car and tractor destroyed in the airstrike.

The footage posted by Zaman Al Wasl matches what’s shown in a video report from Orient News of first responders arriving at the incident site. Facebook users also posted another video from Orient News showing the smoking, mangled vehicles and scattered rubble from the strike. AFP as well as SMART News posted photos and videos documenting the aftermath. A video from SMART News specifically shows the crater from the airstrike in the middle of the highway. 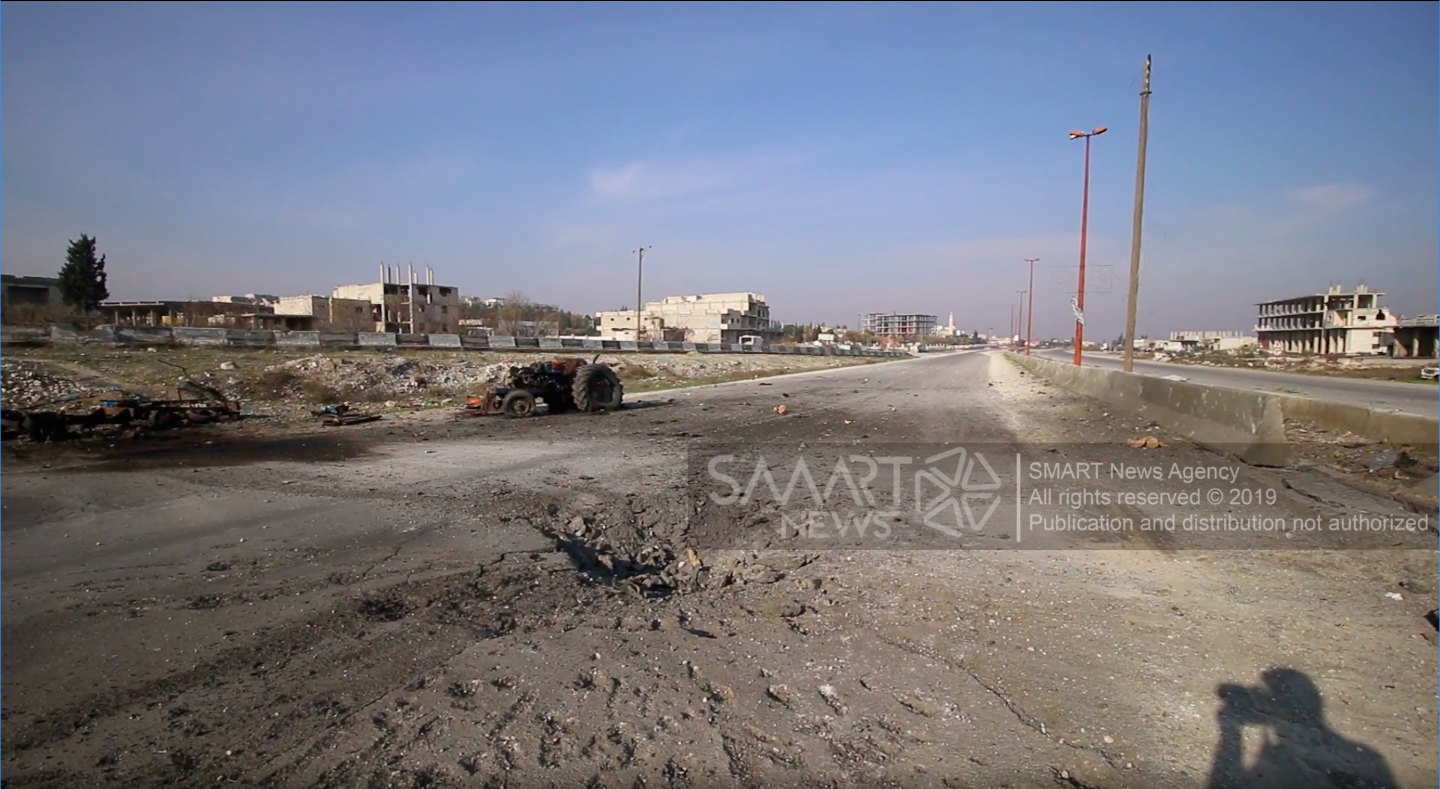 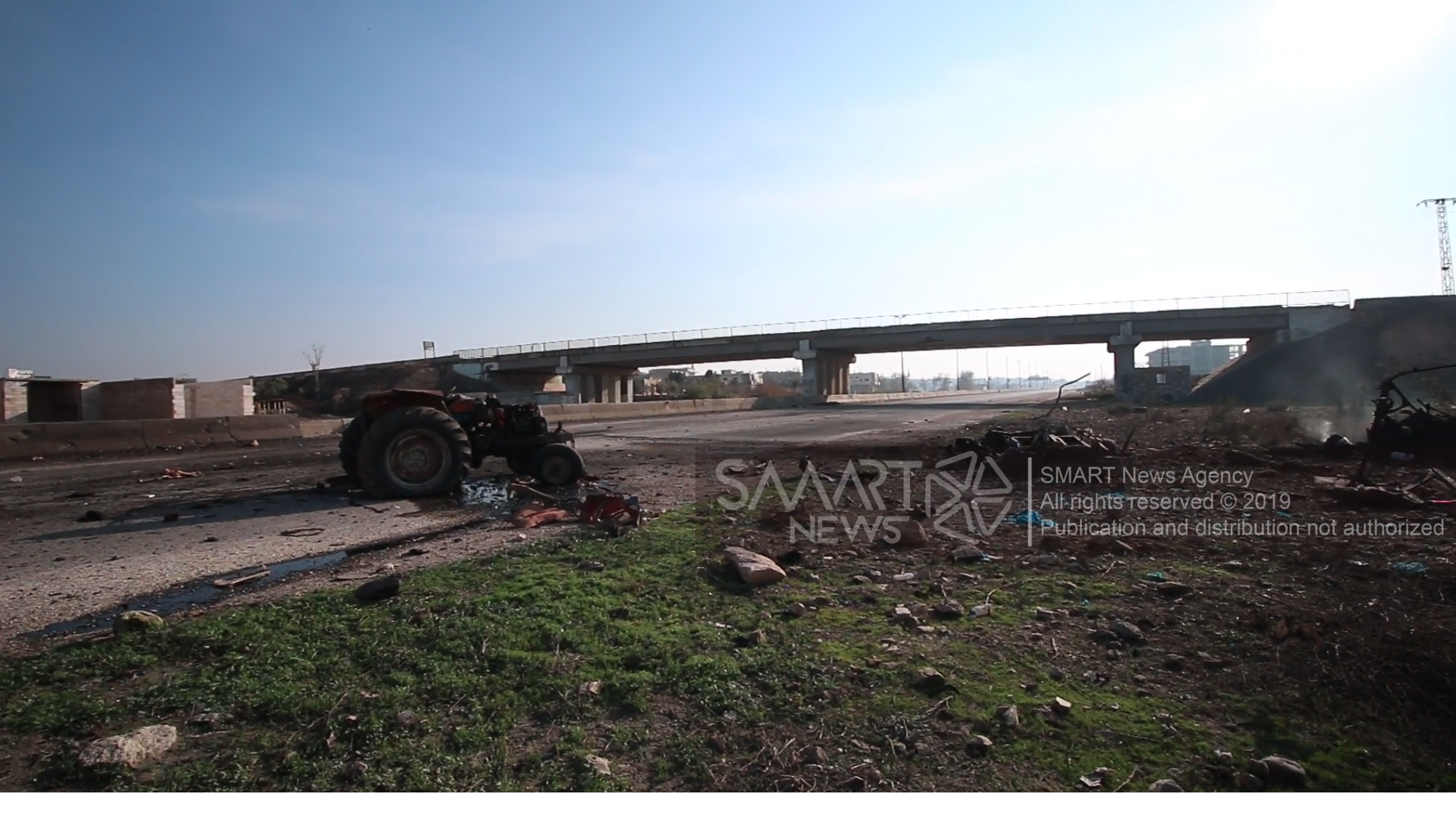 Stills from videos taken by SMART News showing the impact site including the crater from the airstrike.

Later after the incident, a number of news sources including Step News Agency, Nedaa Syria, Zaman Al Wasl, Syria TV, and Al Hadath mention the airstrike on the tractor and car carrying civilians. Additionally, Enab Baladi reported specifically on the incident claiming the airstrike came from a Russian warplane. Moreover, video reports from Orient News and Baladi News, blaming respectively the Russian and Syrian governments, show the aftermath of the strike confirming a car and tractor were destroyed in the blast killing the civilians on top and inside of the vehicles.

Satellite imagery from before and after the incident show the crater and the location of the two damaged vehicles on the road from the airstrike on December 22.

On December 27, ANNA News Agency, whose channel was allegedly later removed by YouTube, posted a video documenting the airstrikes conducted by the Russian and Syrian Air Force in the Idlib governorate. A clip from this video shows the moment of the December 22 airstrike on civilians leaving Maaret Al Numan, further confirming the incident. 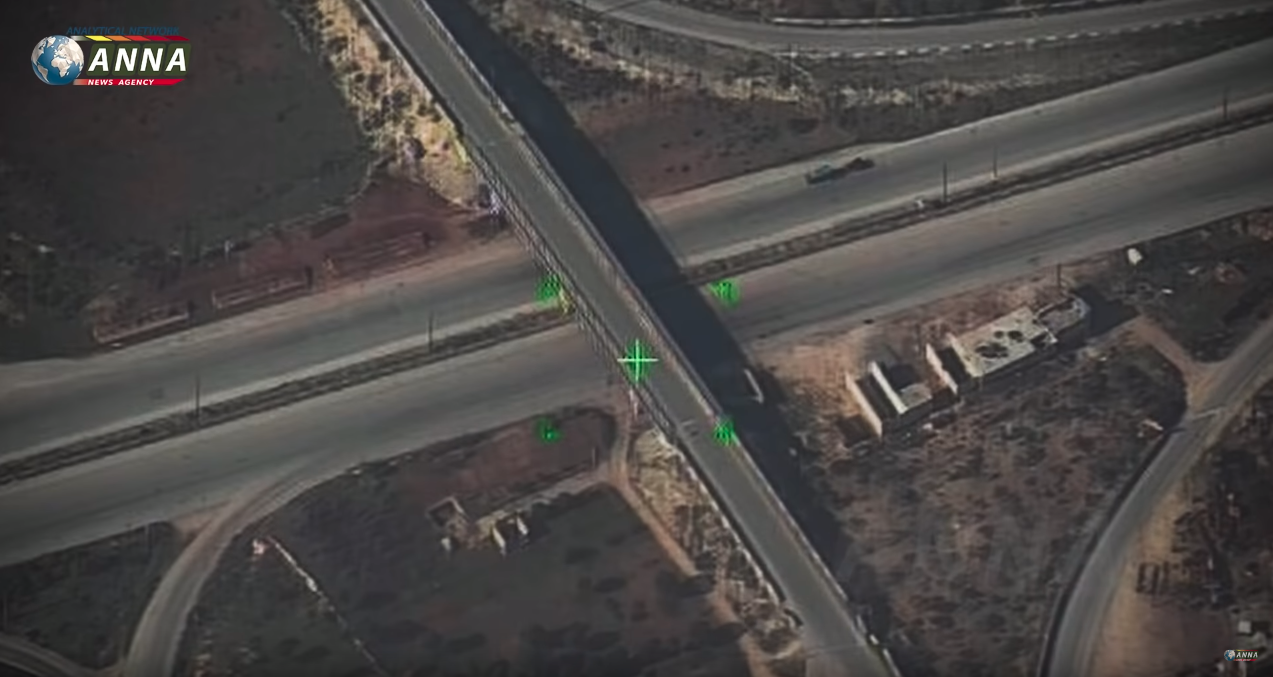 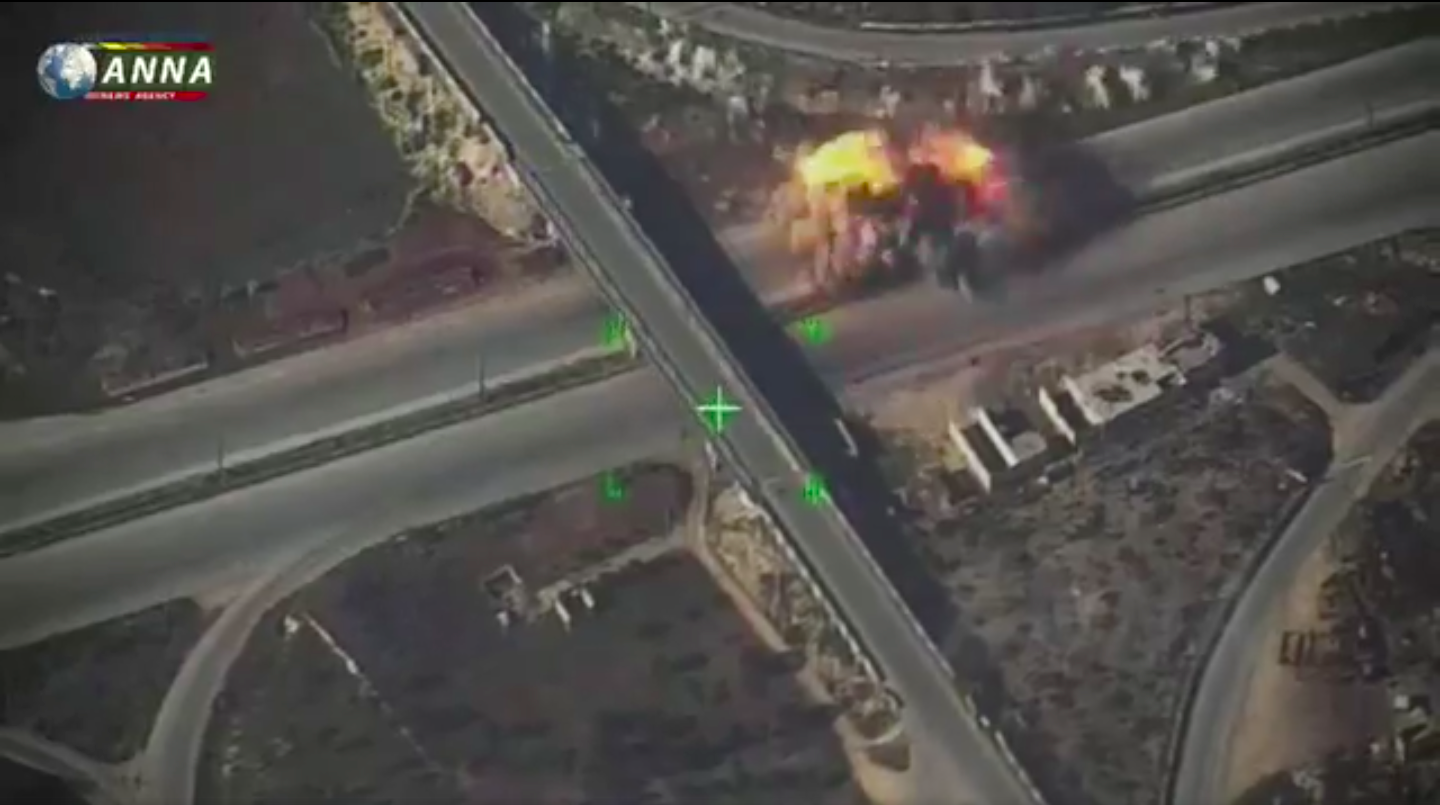 Stills taken from a repost of the ANNA News Agency video showing the allegedly Syrian and Russian government airstrikes on locations in the Idlib governorate. Landmarks shown in the video match satellite imagery from Google Earth Pro of the incident site.

Syrian Archive used landmarks shown in the various videos gathered online claiming to show the incident to confirm the strike occurred near Maaret Al Numan. Buildings, roads, and bridges in and around the alleged location of the strike were compared with satellite imagery to verify the location of the incident and videos showing the aftermath. Using geolocation techniques, Syrian Archive found that the incident shown in the videos did indeed occur on a highway in northern Maaret Al Numan. 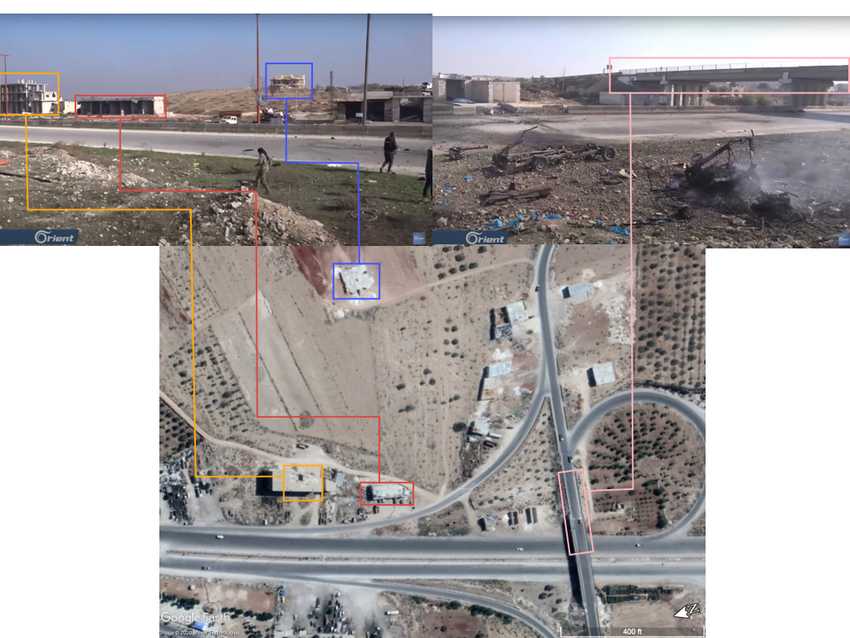 A geolocation by the investigations team of the incident site comparing stills from footage taken by Orient News with satellite imagery from Google Earth.

Syrian Archive used posts from social media, flight observation data, and shadows shown in videos of the aftermath to confirm and corroborate the alleged time of the incident. Social media posts, outlined above, alerting of an airstrike on the town were published after 12:30, the reported time of the incident. Further corroborating the time of the airstrike, shadows in videos showing the direct aftermath of the strike match the calculated position of the sun at around 12:30. Moreover, flight observation data outlined later in this report, which shows a number of warplanes circling above Maaret Al Numan at around 12:30, further confirms the reported time of the incident. Through these sources, Syrian Archive ascertains that the strike most likely occurred at around 12:30 on December 22, 2019. 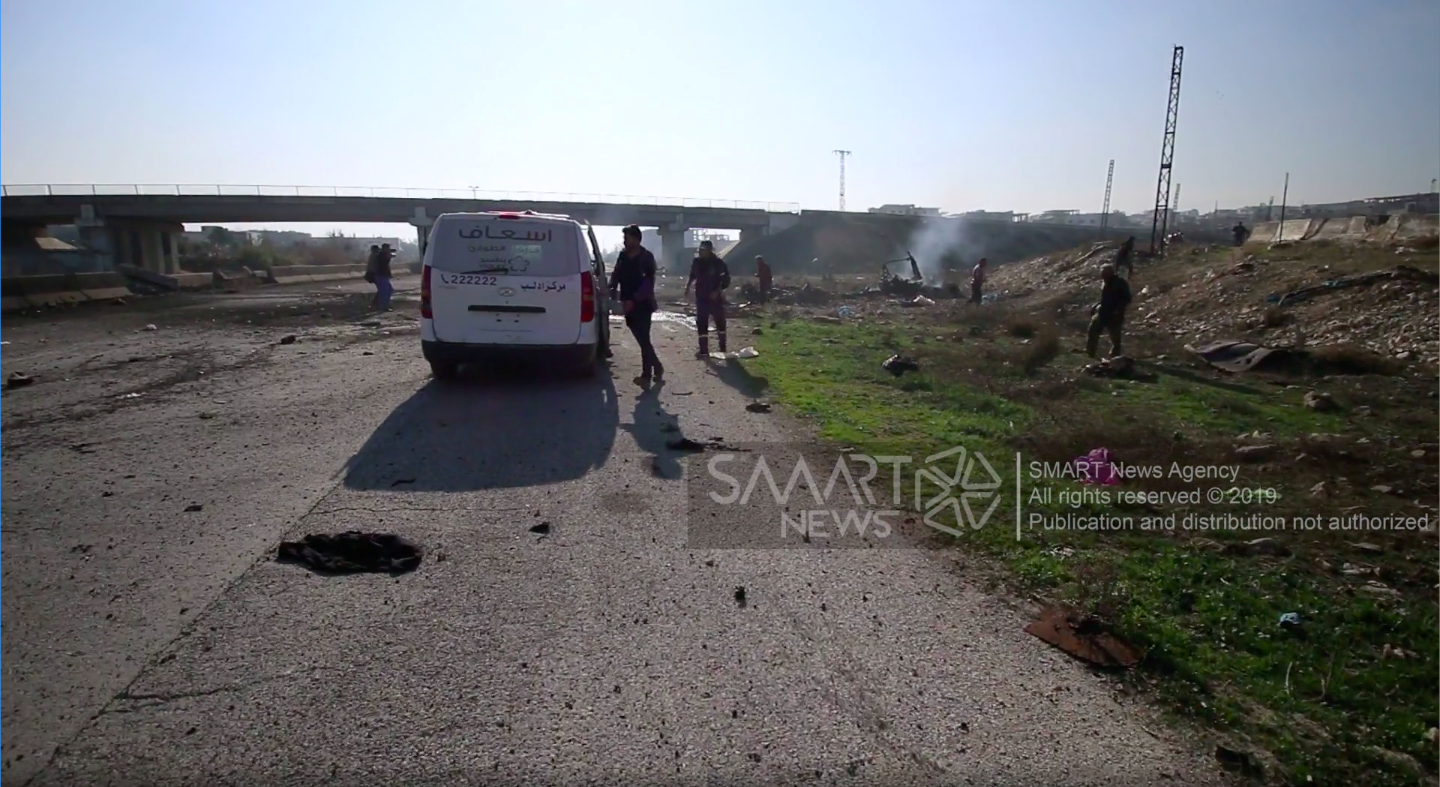 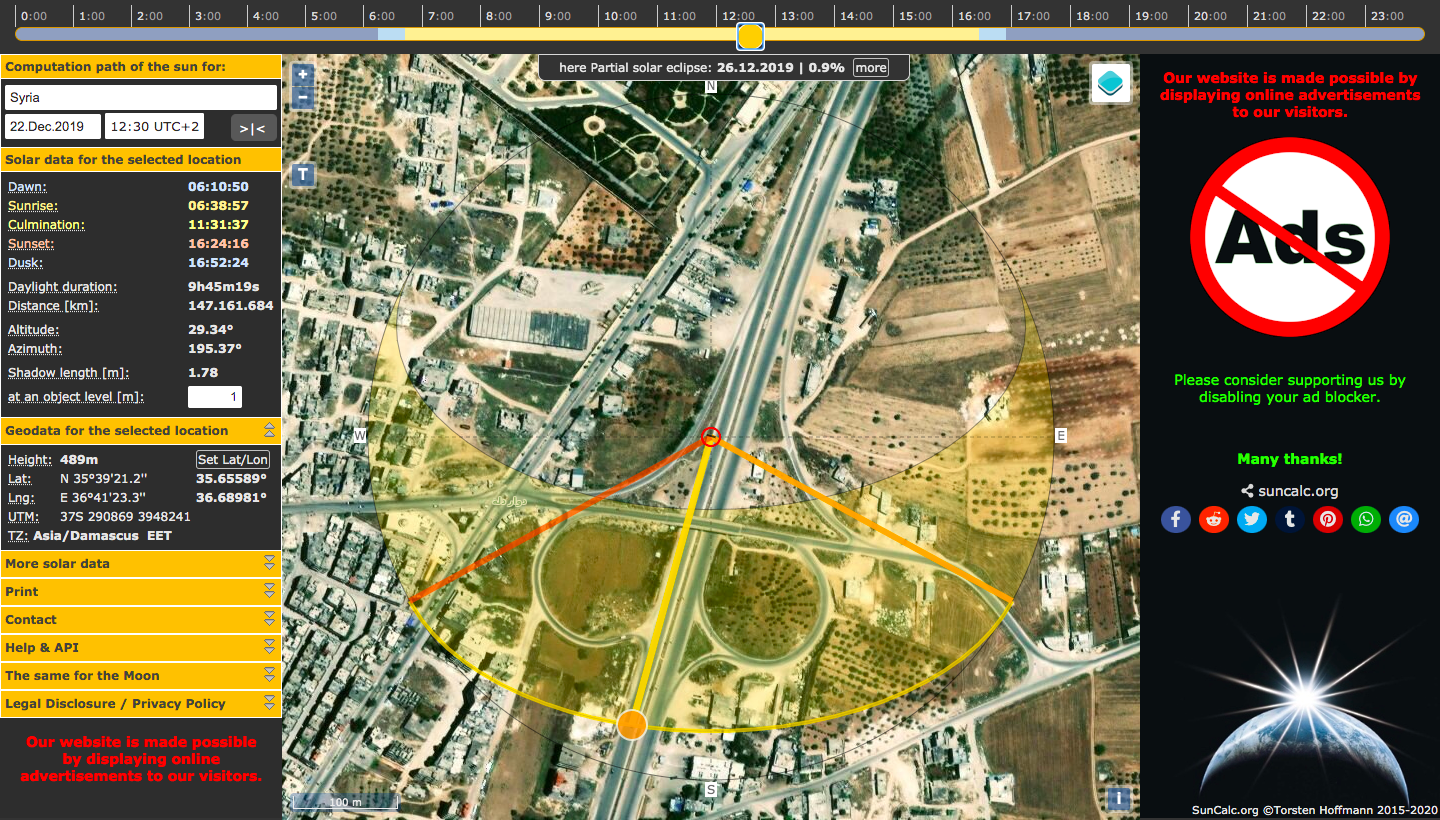 A still from footage taken by SMART News shows shadows matching the sun’s position at around 12:30 as calculated by the SunCalc tool.

Deaths from the Strike

This section examines the number of civilians killed and injured in the strike. Syrian Archive concluded these figures through mutual corroborations amongst social media posts.

Although some sources such as Enab Baladi, SMART News, and Syria TV reported 2 to 4 civilians killed in the strike, the majority of sources including Step News Agency, Zaman Al Wasl, Orient News, and Baladi News reported specifically that three displaced civilians from the same family were killed by the airstrike along with 1 other civilian who was injured by the strike. Their names were listed in a post by the Facebook page The Taqanah Village Today.

An image of the post by The Taqanah Village Today Facebook page listing the names of the three killed by the airstrike.

According to the Syrian Network for Human Rights, the family was killed as they attempted to escape the frequent airstrikes on Maaret Al Numan by heading north out of the town. The organization additionally claims the Russian Air Force is responsible for the incident. 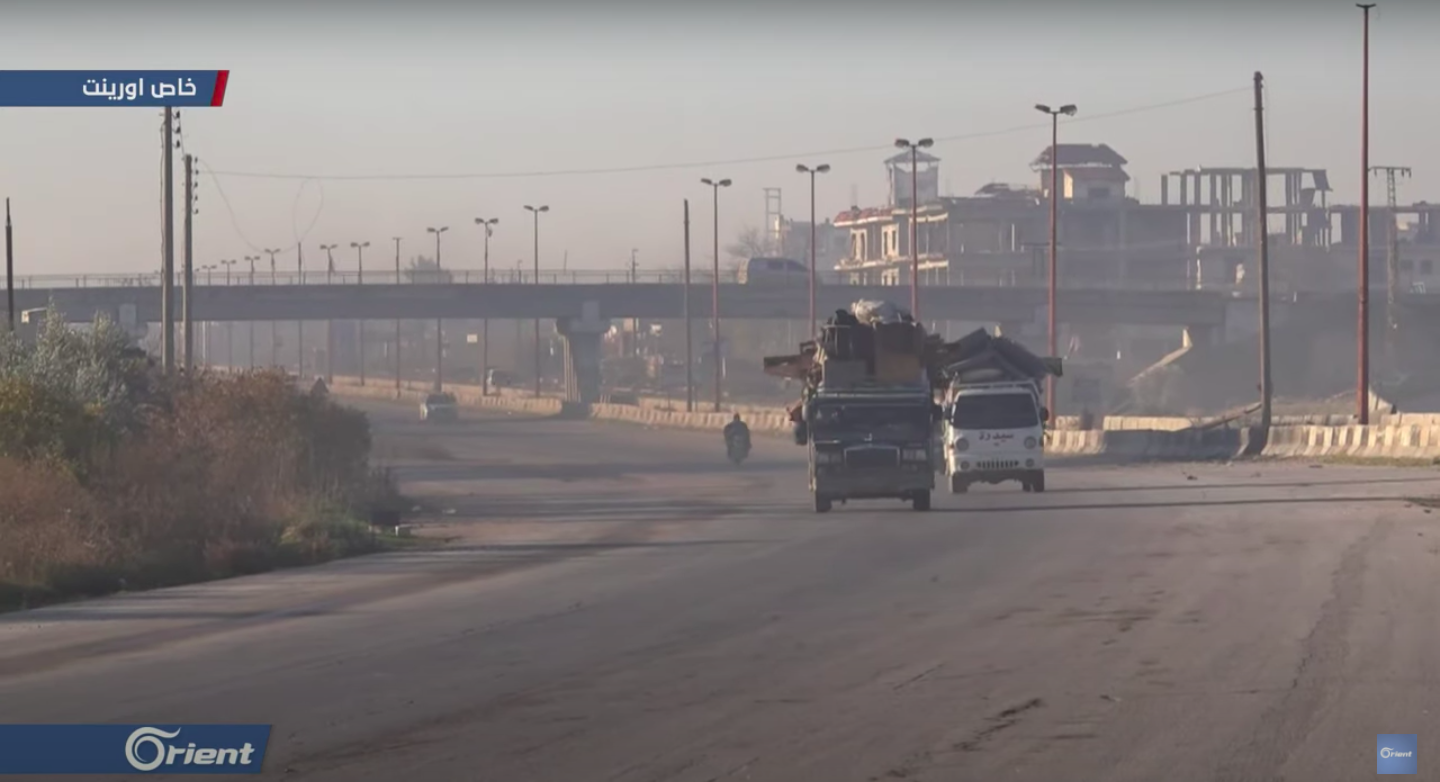 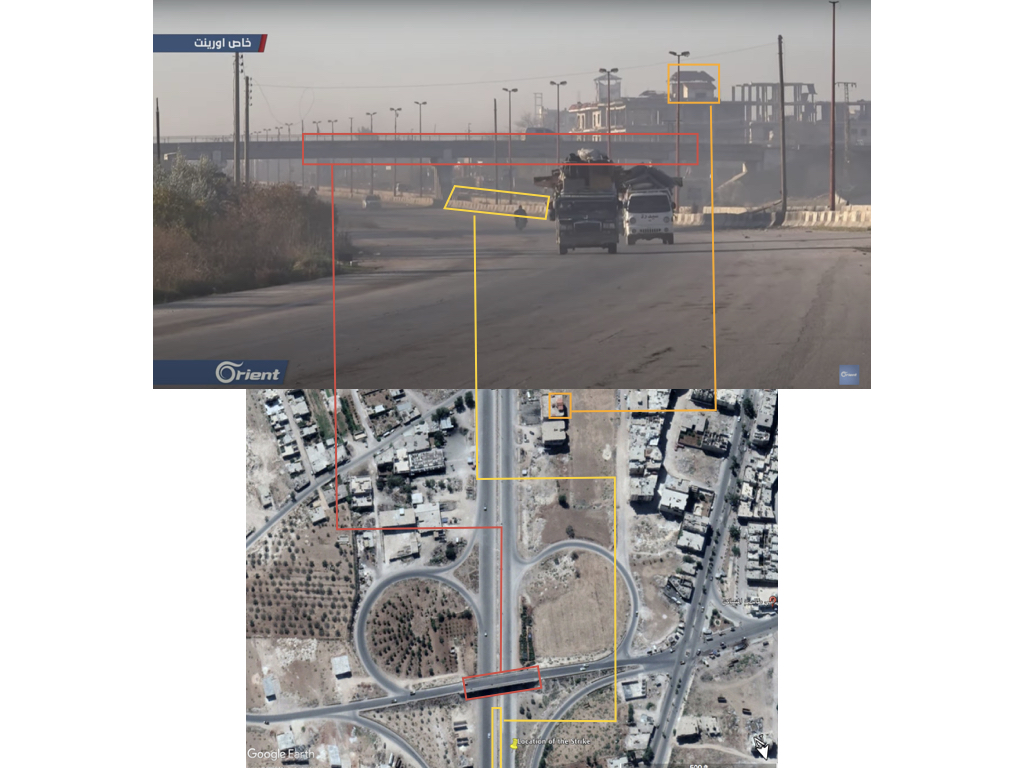 A still from a video report posted on December 20 by Orient News showing residents fleeing north from the town on the Aleppo-Damascus International Highway. Cars are shown passing the site of the December 22 airstrike.

An Orient News video report posted on December 20 covering residents fleeing Maaret Al Numan shows the location of the incident as well as cars driving north out of the town. This further confirms reports that the family killed in the strike was, like other civilians, fleeing north from Maaret Al Numan.

This section closely reviews flight observation data showing the planes flying above and around Maaret Al Numan before, during, and after the time of the incident.

To further verify the incident, Syrian Archive cross-referenced information from open sources with flight observation data from a spotter organization, which documents sightings of warplanes by partner observers in cities throughout Syria. These observers collect data about the aircrafts such as the type of plane and the direction the plane is flying. Although there may be misidentifications of aircraft in the flight data, additional information such as witness statements and social media posts can corroborate the identified aircraft and its course. Data for flights occurring briefly before, during, and after the time of the incident around 12:30 near Maaret Al Numan was analyzed.

Following conflicting online reports blaming both Russian and Syrian warplanes for the airstrike, Syrian Archive identified 4 different aircrafts, both Syrian and Russian, in the flight observation data that may be responsible for the strike.

An animated map showing the location of government light ground attack warplanes before and after the airstrike. The “X” signifies the airstrike.

Mentioned above, the common practice of circling by warzone aircrafts featured in this data set generally indicates a target acquisition and/or preparation for an imminent strike.

The circling by Su-22, Mi-8, Russian, and governmentlight ground attack aircraft over and near Maaret Al Numan corroborates the estimated time of the incident as reported by open sources.

There is no information available indicating that one of the observed aircraft was directly involved in the strike detailed above. Nevertheless, the presence of Su-22, Mi-8, Russian, and government light ground attack aircraft above Maaret Al Numan and neighboring towns at or around the reported time of the strike indicates that the Russian or Syrian Air Force may be responsible for the airstrike on civilians fleeing Maaret Al Numan.

According to the information outlined above, a car and a tractor leaving north on the Aleppo-Damascus International Highway in Maaret Al Numan was hit on December 22, 2019 at around 12:30 by an airstrike. The strike killed 3 civilians and injured 1 other civilian. Although Syrian Archive is unable to definitively identify a party responsible, flight observation data and open sources point towards the Syrian or Russian government as responsible for the incident.