Attacks on the Syria Charity Hospital in Azaz

Online news networks and users on social media circulated reports of airstrikes and ground-ground missiles hitting the Syria Charity Hospital for Women and Children on December 25, 2015 and February 15, 2016. Sources claimed Russian and Syrian government forces were responsible for the strikes that killed and wounded a number of civilians, including women and children, as well as severely damaged the medical facility. 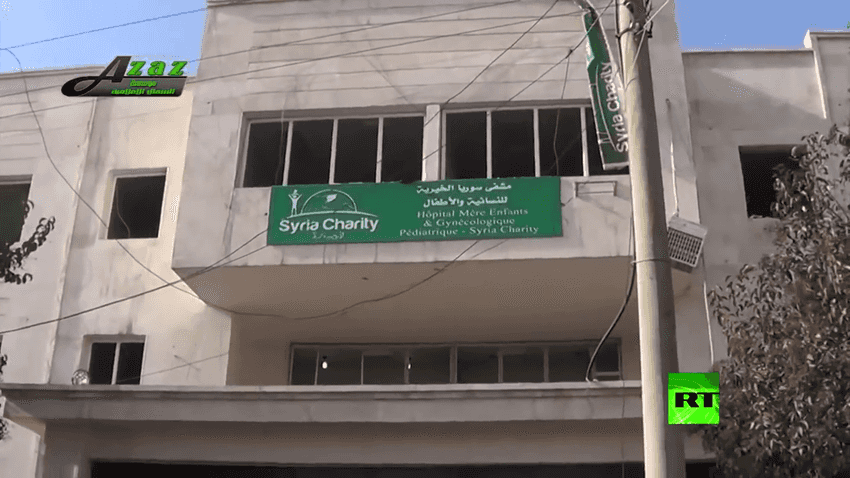 A still of Syria Charity Hospital’s entrance from a report by Azaz Media Office on the attack.

The strikes temporarily forced the hospital out of service, threatening the lives of infants and children under the facility’s care. Syria Charity Hospital for Women and Children is the only hospital specialized in child care and treatment in northern Aleppo. The hospital treated over 4,000 children a month before the attacks.

Syrian Archive conducted an investigation into the incident, consisting of two components:

Examining all information available on the strike, the investigations team developed an understanding of the incident and potential perpetrators.

About the Area of Attack

Azaz is in the northern Aleppo countryside on the Syrian-Turkish border, about 48 km northwest of Aleppo city. On the dates of the two attacks, Azaz was under the control of the opposition group Levant Front and other opposition factions. The site LiveUAMap shows the areas around Azaz in late 2015 and early 2016 as controlled between the Syrian Democratic Forces and Syrian government forces. 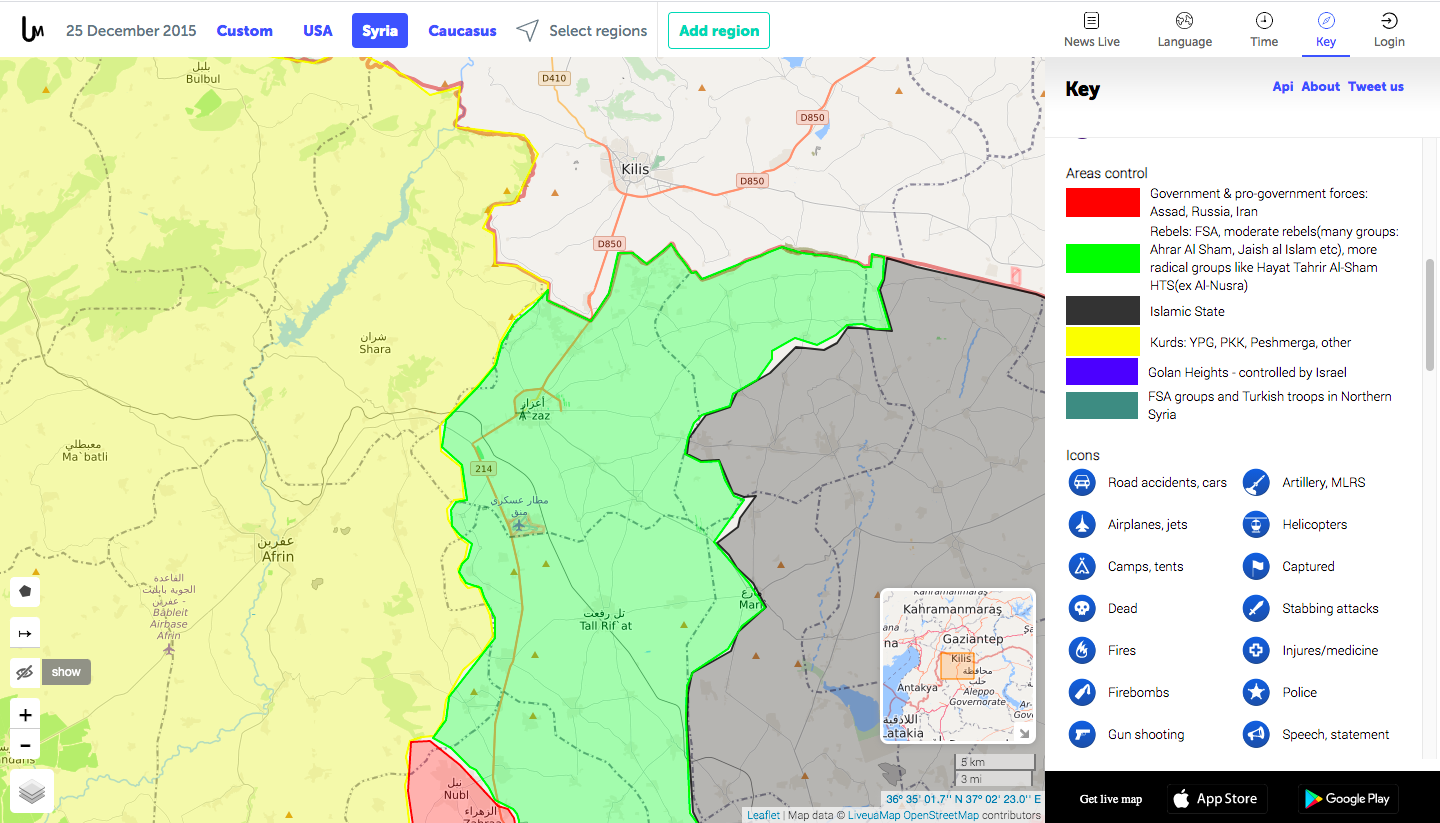 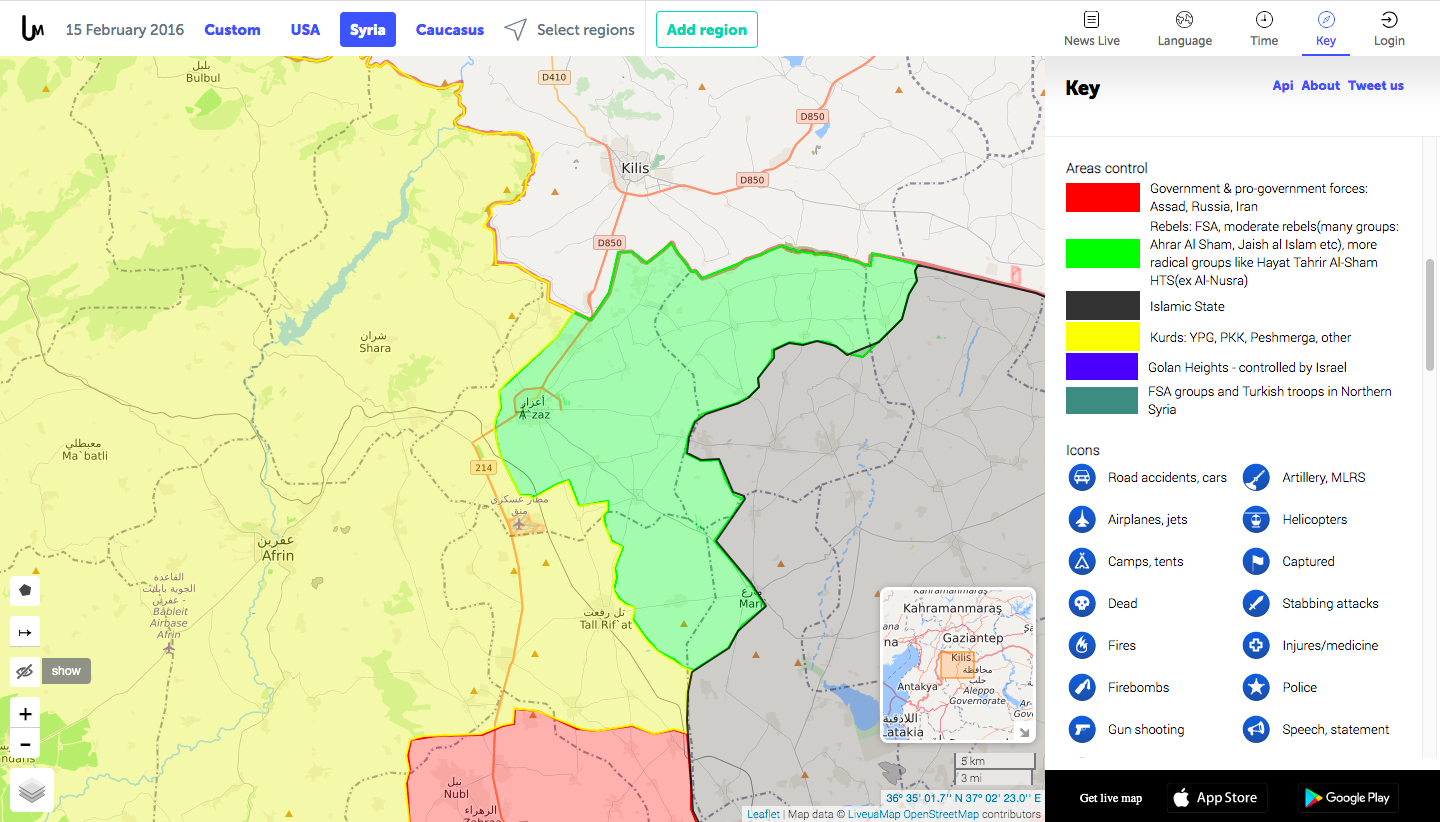 LiveUAMap shows the forces controlling northern Aleppo around the dates of the attack.

Background on Syria Charity Hospital for Women and Children

Syria Charity Hospital was established in Azaz in 2014 with the support of the organization Syria Charity. The hospital houses a number of department including women’s and children’s departments, a laboratory, a pharmacy, a radiology department, a physical therapy department for children with special needs, and a 24 hour emergency room.

Content posted online from the two attacks on the medical facility show distinct and similar landmarks in the hospital’s surroundings, which match satellite imagery of the attacks’ alleged location. This further confirms that the hospital was the hit by both strikes.

Videos posted online show a traffic circle, trees, and a mosque nearby the medical facility. These landmarks can be clearly seen from satellite imagery confirming that the Syria Charity hospital was the site of the attack. 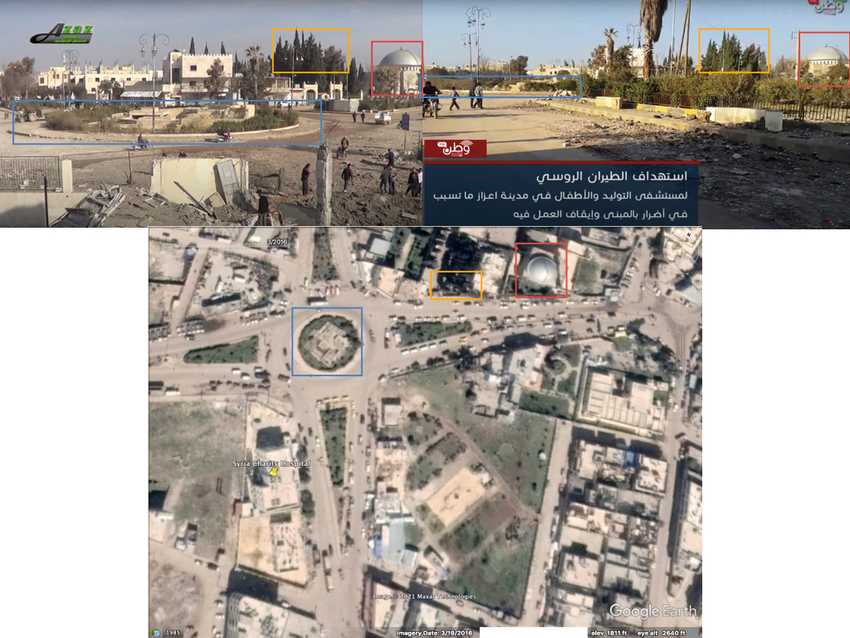 A comparison of landmarks shown in video reports by Watan FM and Azaz Media Office with satellite imagery from Google Earth Pro.

According to online sources, Syria Charity Hospital for Women and Children in the city of Azaz in the northern countryside of Aleppo was hit in two separate attacks in late 2015 and early 2016. The first attack was on December 25, 2015. The hospital was allegedly hit in Russian airstrikes on the main road near the hospital’s wall. The second attack was on February 15, 2016 when a ground-ground missile launched by Syrian government forces hit the hospital’s yard.

Reports stated that the two attacks killed and injured those inside and passing by the hospital at the times of the attacks. Casualties in both attacks included women and children. The attacks also caused severe damage to the hospital’s building and medical equipment forcing it temporarily out of service. 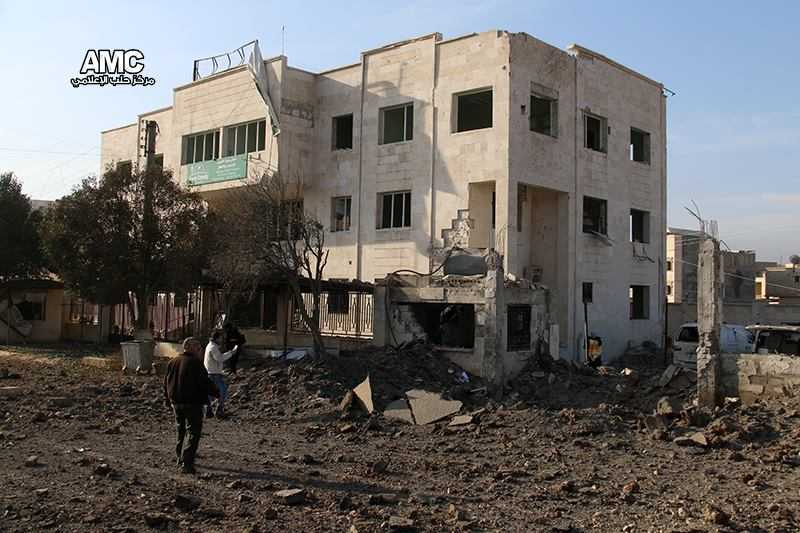 A picture of Syria Charity Hospital for Women and Children after its second attack in February 2015.

On the morning of December 25, 2015, reports circulated on social media, news websites, and TV news of Russian airstrikes hitting Syria Charity Hospital for Women and Children. The first report on the attack was tweeted by the Aleppo Media Center at 09:40 AM. The news site Micro Syria later reported the hospital as out of service from the airstrikes.

The first report of the attack posted on Twitter by the Aleppo Media Center.

Initial posts were corroborated by video reports uploaded to YouTube by news networks and local users showing the aftermath of the attack. Videos posted by Al Jazeera, Syria Charity, Baladi News, Abdel Qadir Abu Youssef, VideoNews, Azaz Al Youm, Shahba Press, and Hussein Khattab show damage to the hospital as well as smoke rising from a building opposite the hospital that caught fire. 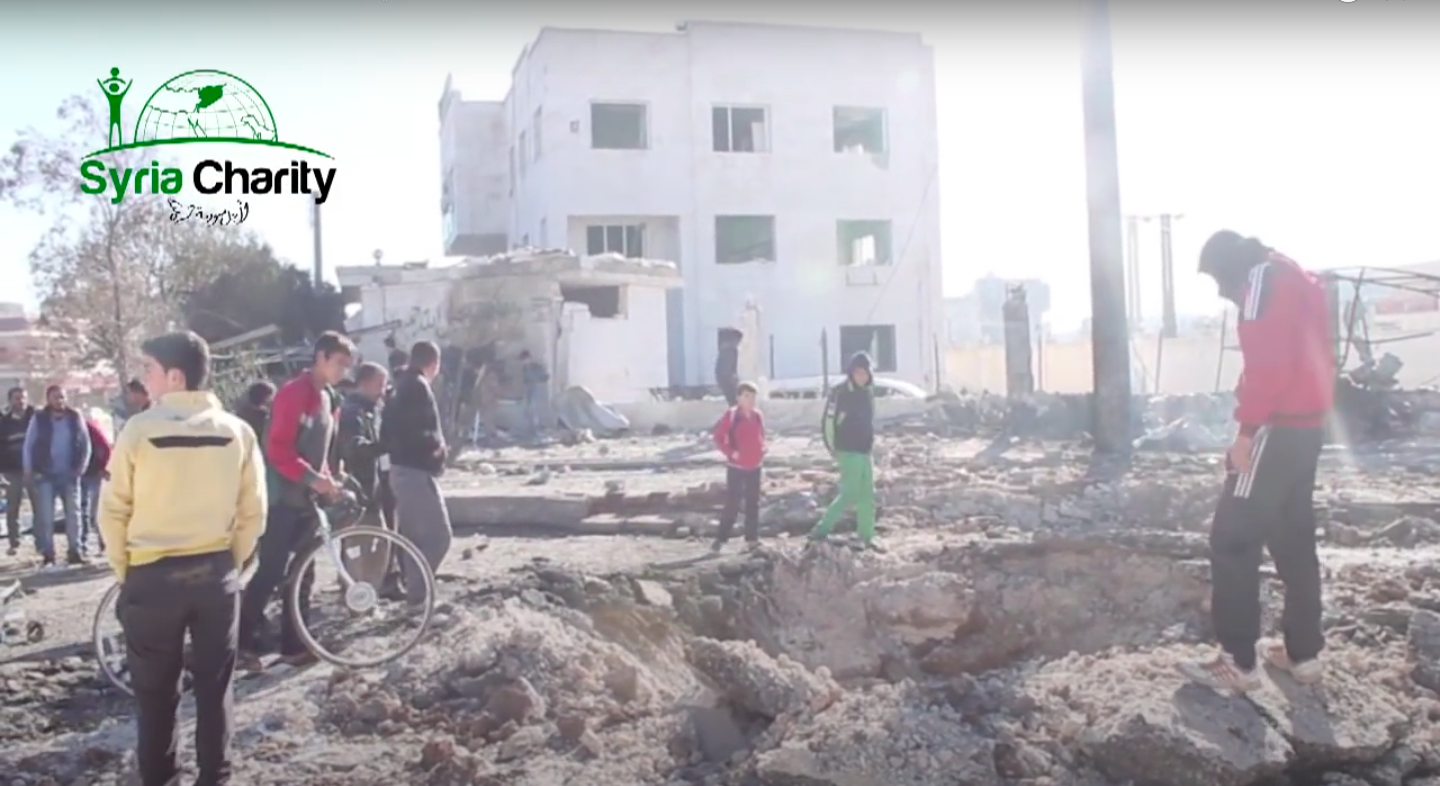 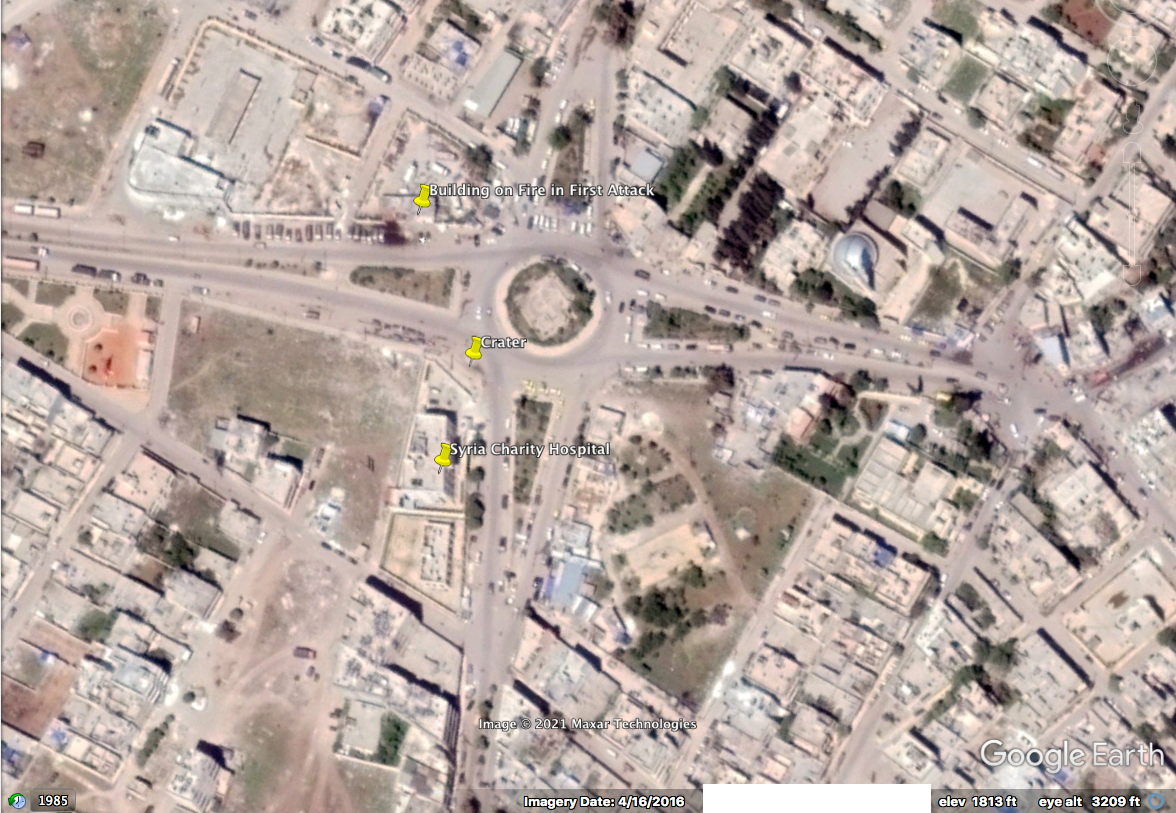 Videos and photos posted online show the crater in front of the hospital from the airstrikes as well as the shop across from the hospital burned in the strike.

Time of the First Attack

In an interview posted by VideoNews, a resident helping extinguish fires with the Civil Defense team (at minute 00:01:13) stated that the attack took place at around 9 AM. This matches the position of shadows shown in a video posted by Azaz Al Youm of the hospital and its surrounding areas directly after the strike. As shown below, the shadow from an ambulance next to the hospital matches the sun’s position, as calculated by the SunCalc tool, in Azaz between 08:45 - 09:15 AM. This further corroborates the timing of the attack as around 9 AM.

The shadows shown in a video posted by the Azaz Al Youm YouTube channel of the direct aftermath of the attack match the position of the sun in Azaz at approximately between 8:45 - 9:15 AM on December 25, 2015. The position of the sun was estimated using the Suncalc tool. This matches and corroborates the timing of the incident as reported by journalists and sources online.

Damage to the Hospital from the First Attack

Videos and pictures posted online show the damage to Syria Charity Hospital. The airstrike—a missile that hit the main road about ten meters away from the hospital wall—destroyed the operating and anesthesiology rooms, forcing the hospital temporarily out of service. Videos posted by Shahba Press and Abdel Qadir Youssef show the damage to the departments. Additionally, a video posted by Baladi News shows the site of the strike and a fire that broke out in a store opposite the hospital. 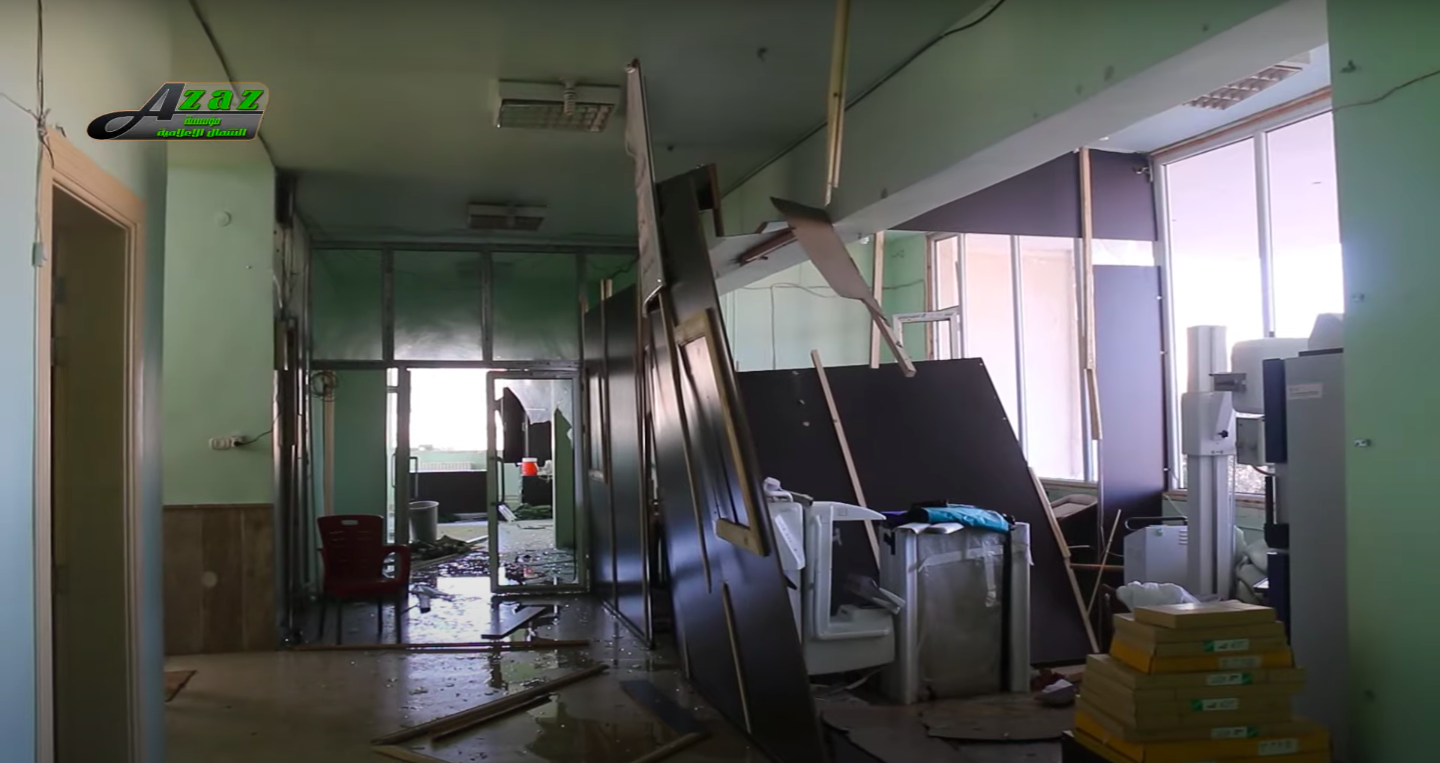 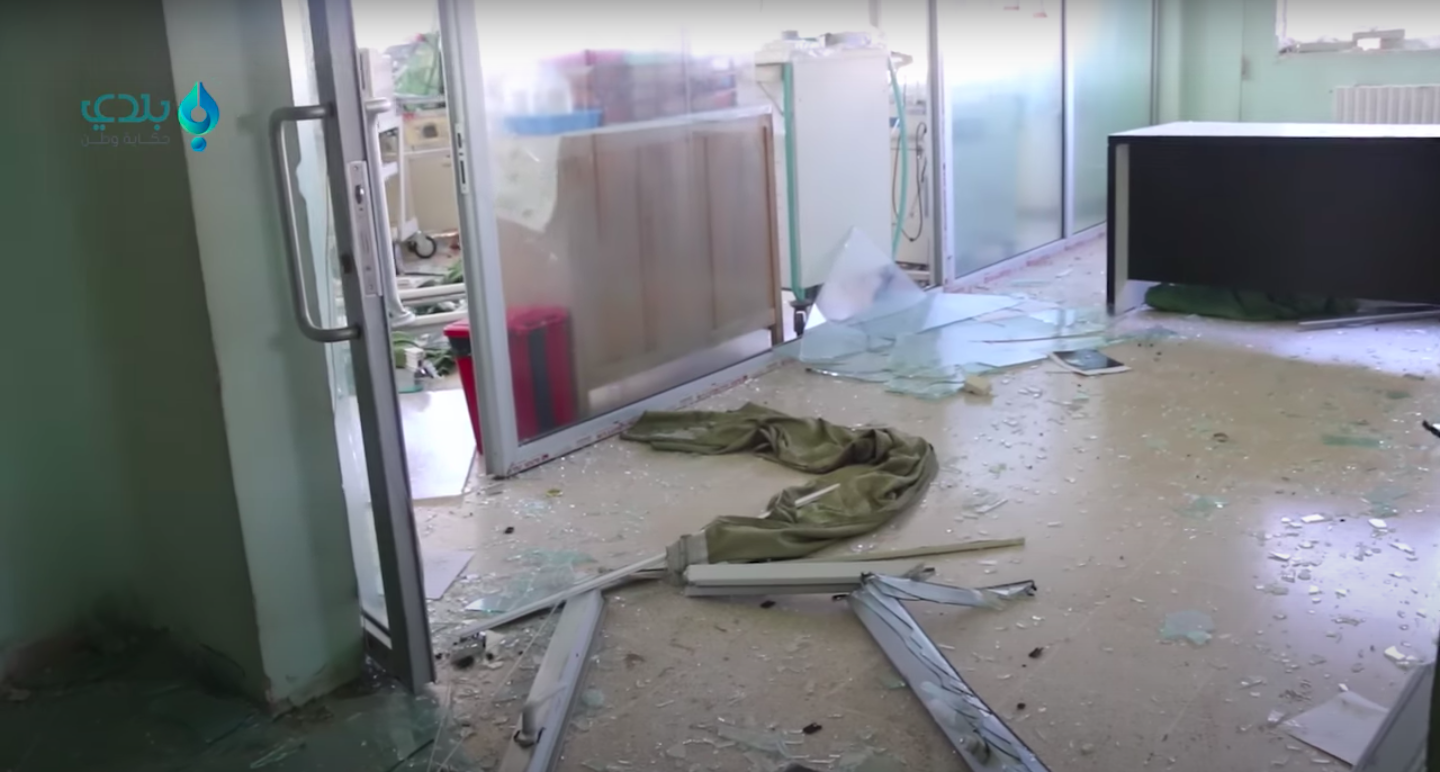 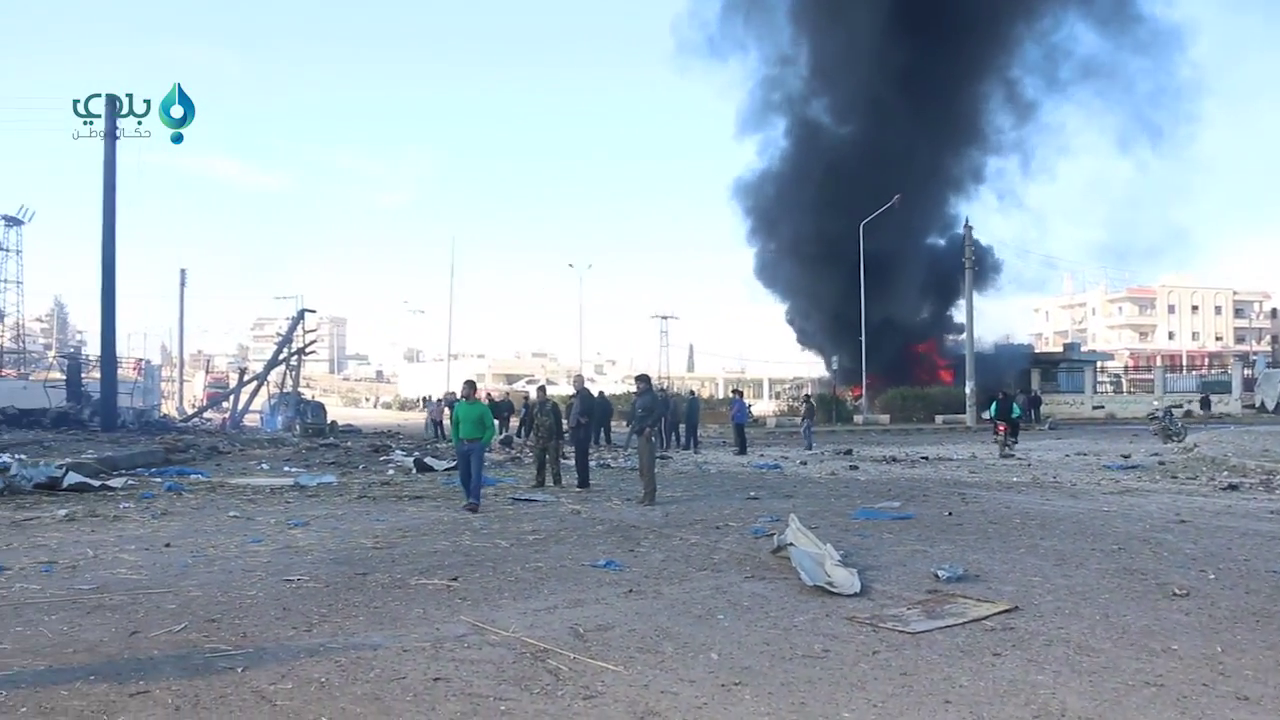 The fire in the store opposite the hospital

Pictures of the damage to the hospital from the December 25, 2015 attack. The pictures are from the hospital’s Facebook page, Baladi News, VideoNews, and Abdel Qadir Youssef.

The Al Jazeera and Al Dorar Al Shamiya reports on the attack confirm 14 were killed and dozens were injured in the strike on the hospital. The Free Syria website published a list with the names of those killed in the attack:

A hospital employee who was interviewed in the Shahba Press video report stated that six hospital staff members were injured in the attack.

On the morning of February 15, 2016, the Syria Charity Hospital was hit by a ground-ground missile, according to social media posts and news sites. The first report of the incident was posted by user “Aleppo and Its Countryside News” on Twitter at 08:20 AM. 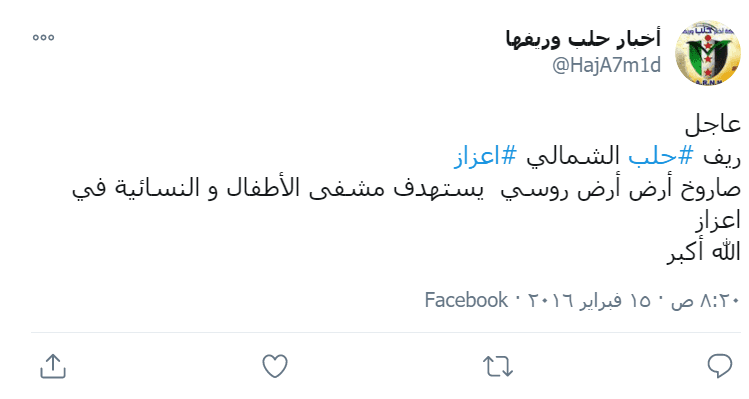 A screenshot of the first report on the attack by user “Aleppo and Its Countryside News” on Twitter. 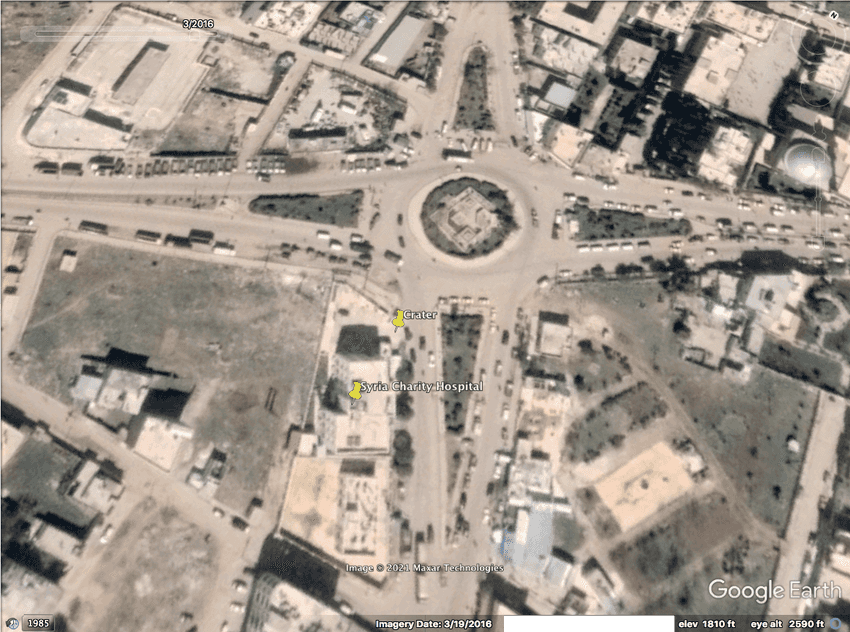 The location of a crater from the strike as shown on Google Earth.

Various sources provide reports regarding the exact number of casualties from the attack. In its report, Human Rights Watch quoted Syria Charity, the organization that runs the hospital, which reported 15 hospital staff members were injured in the attack with four of them severely wounded. In an interview with France24, Zakaria Mubarak, the director of the hospital, said that 15 were “wounded and two are in serious condition and were rushed to Turkey.”

‪‬A paragraph from the Human Rights Watch report on the attack.

Following the attack, videos and photos were published showing the damage to the facility. These can be analyzed to confirm the time of the attack.

Time of the Second Attack 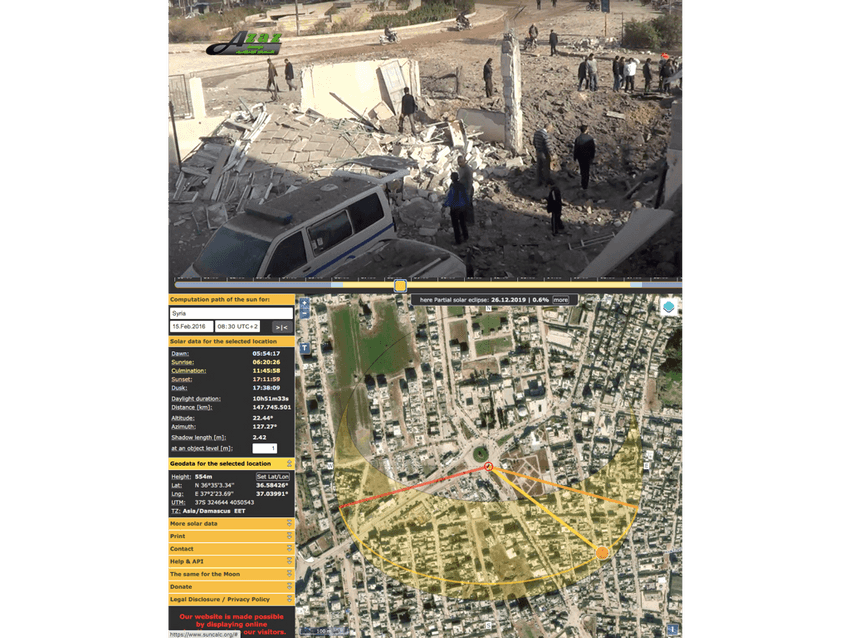 Shadows shown in a video posted by Azaz Media Office of the damage to the hospital from the attack match the position of the Sun in Azaz between 08:00 - 09:00 AM on February 15, 2016. As done earlier, the position of the sun was estimated using the Suncalc tool. The position of the shadows corroborates the timing of the incident as reported by journalists and sources online.

Damage to the Hospital from the Second Attack 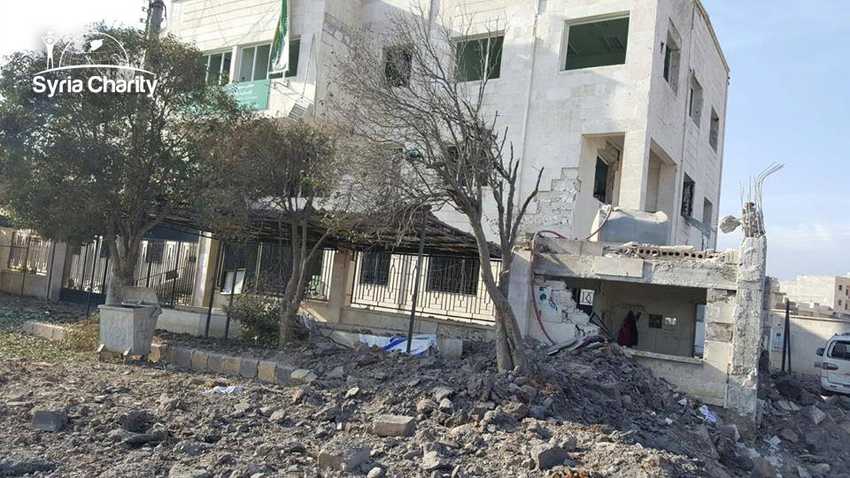 A photo, posted by the Syria Charity Facebook page, of the damage to the hospital from the second attack.

Videos posted by the Free Aleppo Health Directorate, Orient News, Azaz Media Office, and Al Hadath show the extensive damage to the hospital from the missile strike. The hospital’s medical equipment, including its incubators and two of the hospital’s ambulances, was damaged in the attack. The operating room as well as the windows around the hospital, damaged initially in the December 2015 attack, were damaged again. The missile formed a crater on hospital grounds. 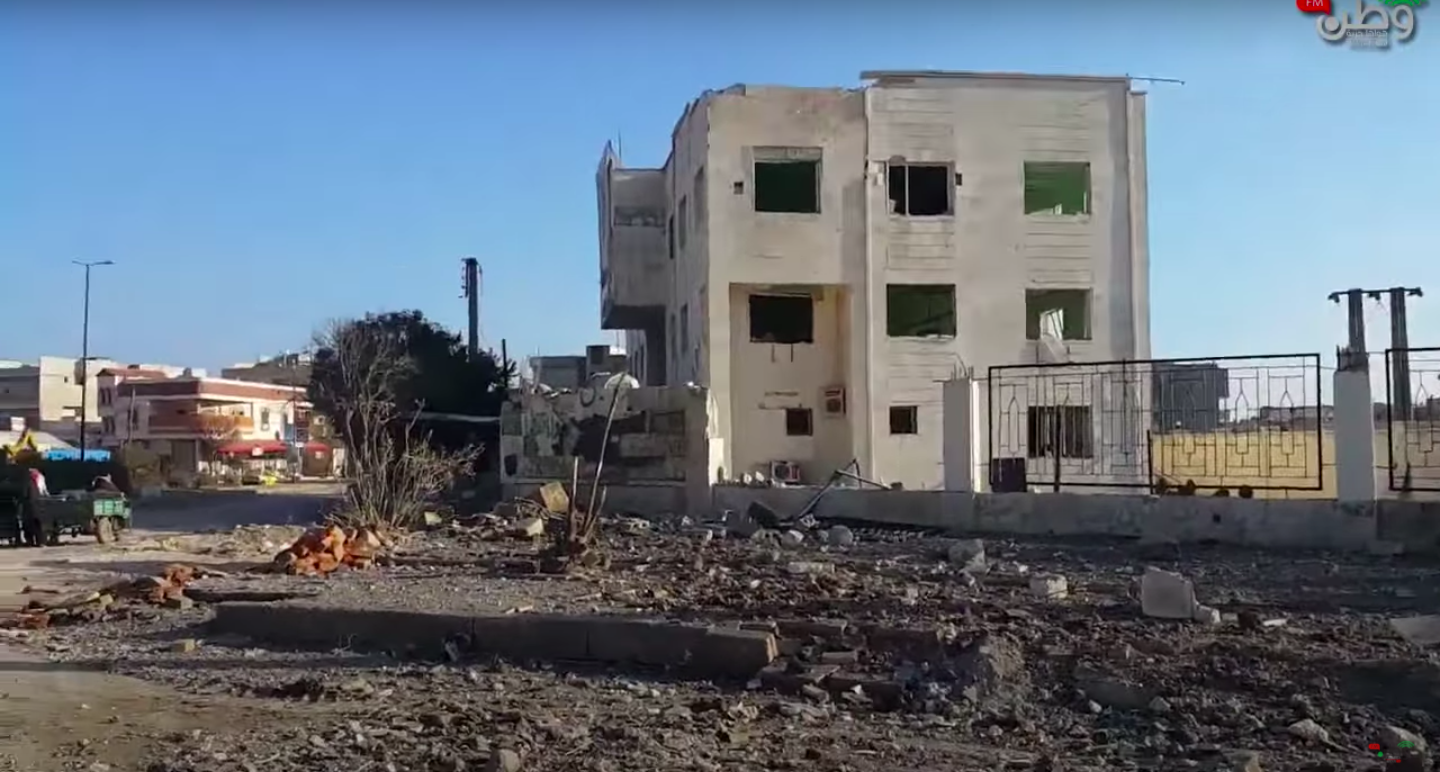 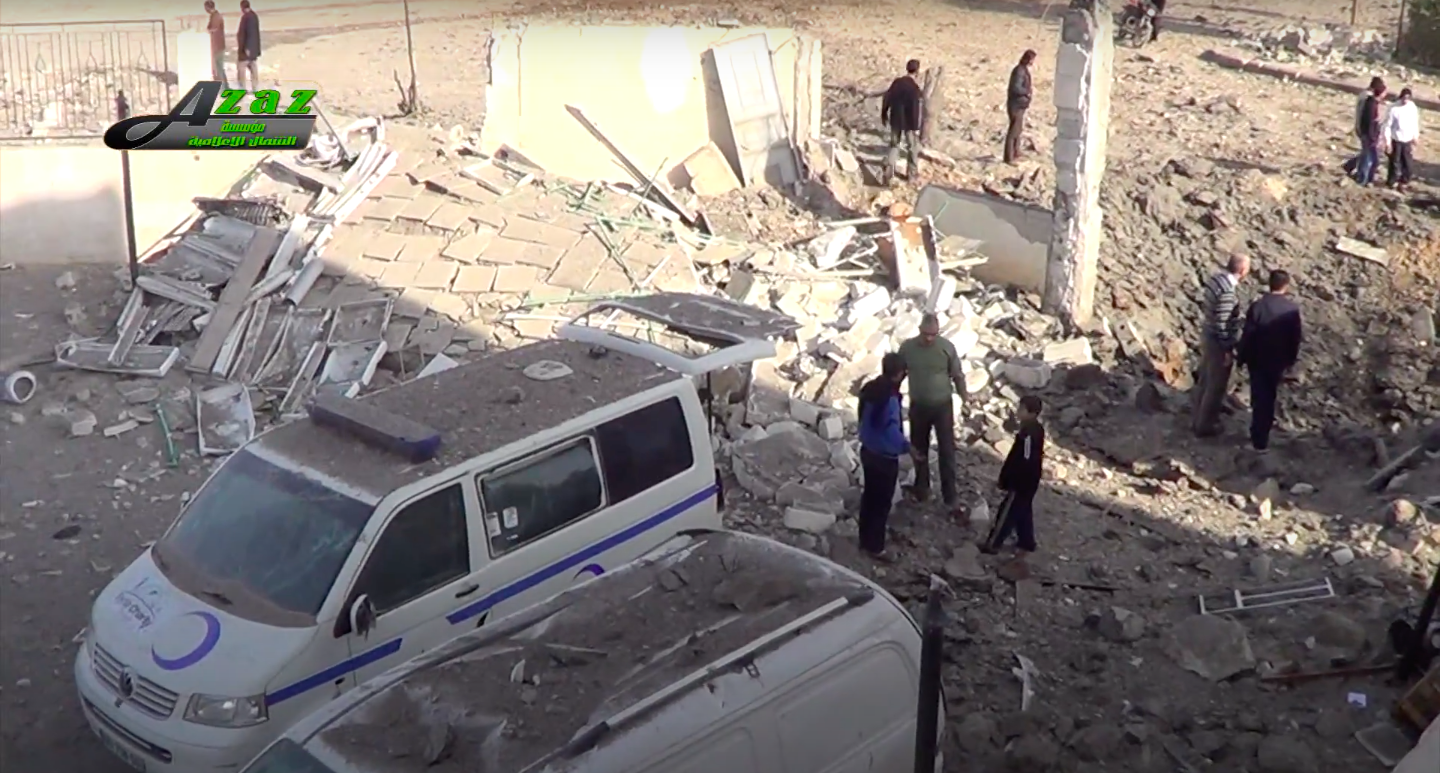 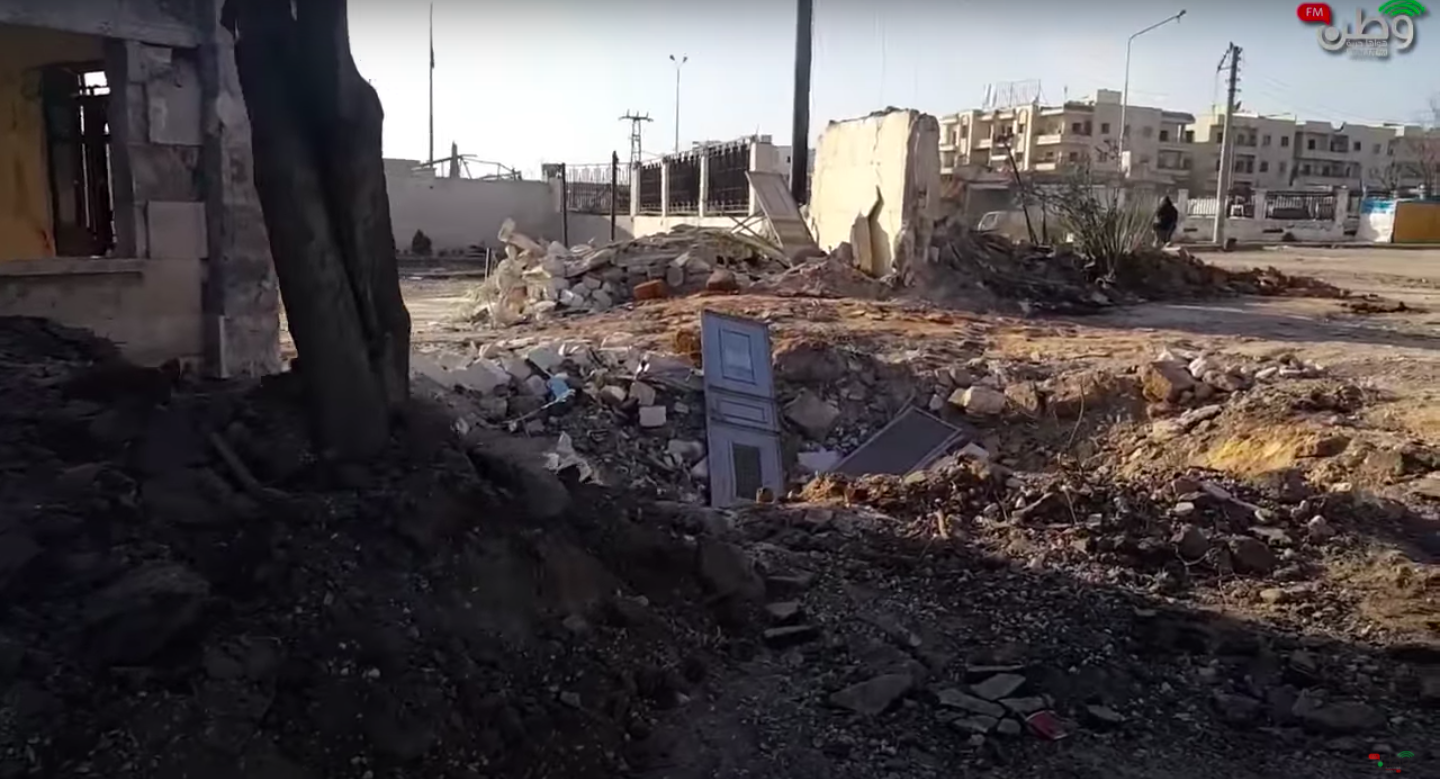 The crater caused by the missile strike

Munitions Used in the Second Attack 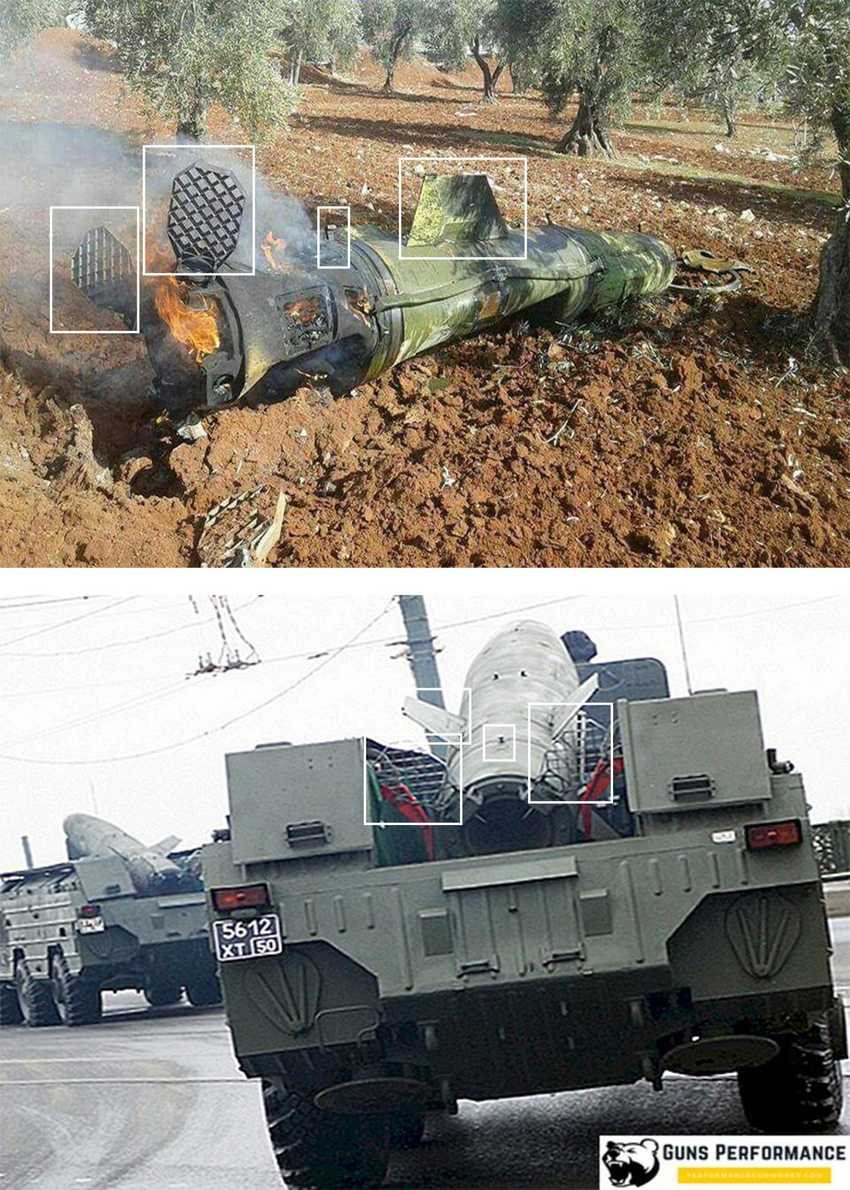 Above is a photo tweeted by user Mada Syria of a missile that landed near the hospital. Below is a picture from the website [Guns Performance](https://ar.performancegunworks.com /1417-tactical-missile-system-point-u-characteristics-spee.html) of a 9m79 Tochka missile.

Through the information detailed above, Syrian Archive concluded that the Syria Charity Hospital for Women and Children was subject to two separate attacks that occurred within a 60 day period. The first attack was by airstrike on the morning of December 25, 2015. The attack killed 14 civilians and reportedly injured 6 hospital employees. In its second attack, the hospital was hit by a ground-ground missile, likely a 9m79 Tochka missile, on February 15, 2016. The attack wounded 15 civilians and temporarily pushed the hospital out of service. Although Syrian Archive is unable to definitively determine the perpetrators responsible for these attacks, social media posts, news reports, and munition remnants suggest the Russian or Syrian Air Force is likely responsible for the first attack and Syrian government forces are likely responsible for the second attack.