Strike on the Martyr Abdo Salama School in Sarmin

Next to the entrance of the Martyr Abdo Salama School in the town of Sarmin, 9 year old Abdel Qader Shakul stood talking with his friends after class. While Shakul was standing near the building, the school, alongside other civilian populated areas in the town, were hit by a strike killing 9 civilians including five children, two women, and two men who were residents of the city as well as living in its shelters for internally displaced peoples (IDP). The strike wounded 12 civilians. The Syrian Archive’s investigations team documented and confirmed the names of those killed and wounded through open sources. Alongside verifying information of those killed, the investigations team analyzed and verified the strike on the town’s center.

Syrian Archive conducted an investigation into the incident, consisting of two components:

Examining all information available on the strike, the investigations team developed an understanding of the incident and potential perpetrators. 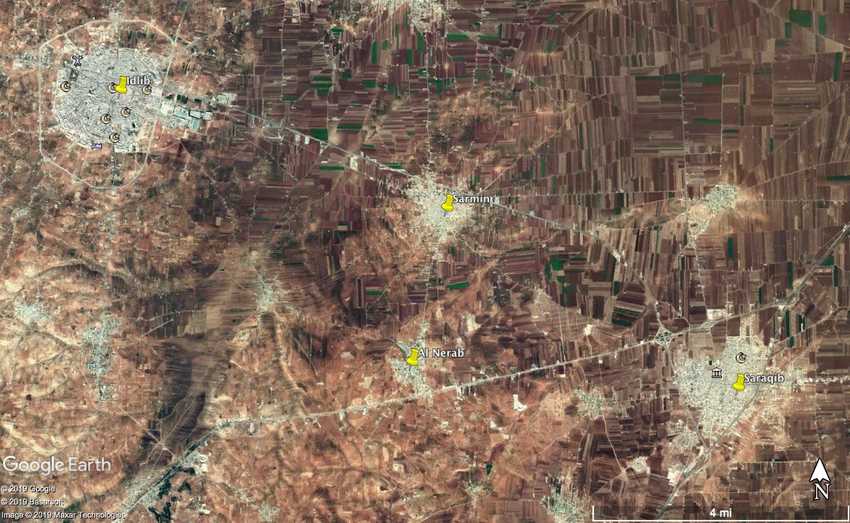 A map of Sarmin and neighboring towns shown on Google Earth satellite imagery.

Sarmin is located in the Idlib Governorate and is only around 8 km east of Idlib’s city center. Its current population stands at around 4,800 families (about 26,000 people) according to Ali Taqash, the head of Sarmin’s town council, interviewed by the investigations team. These estimates, according to Taqash, were made in the absence of a statistical office and through the services that the council provides as well as the taxes it collects. The last estimate was made in October, three months prior to the incident. 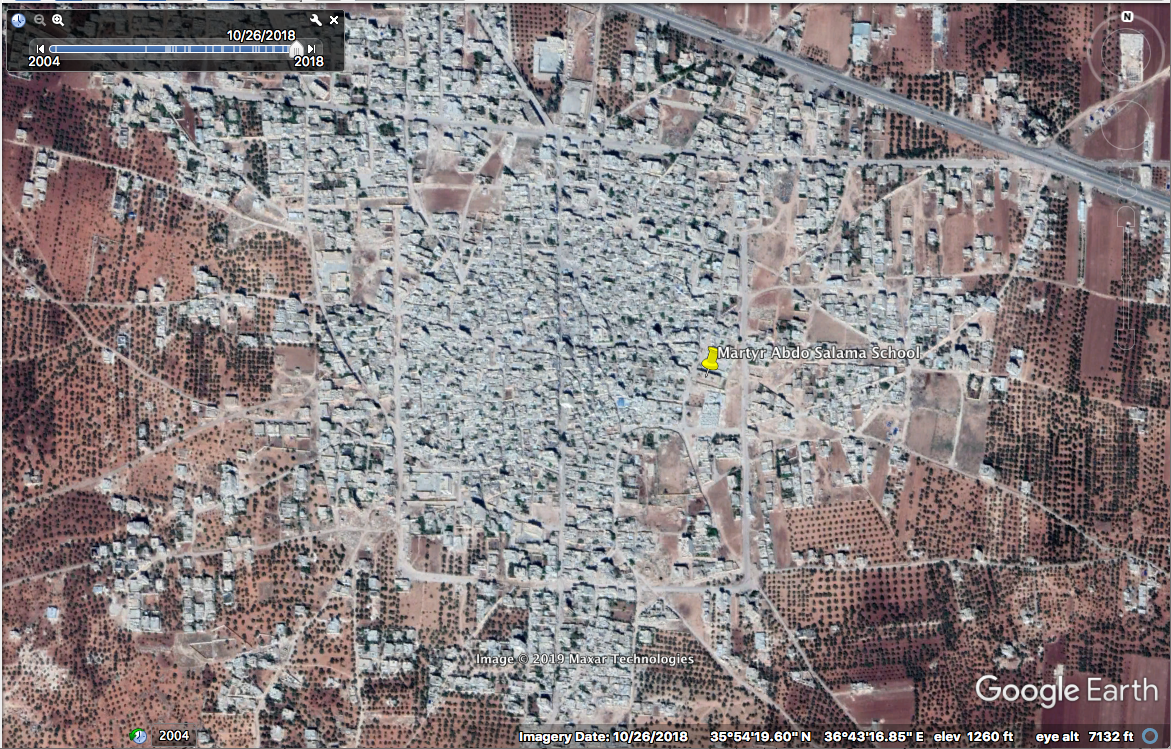 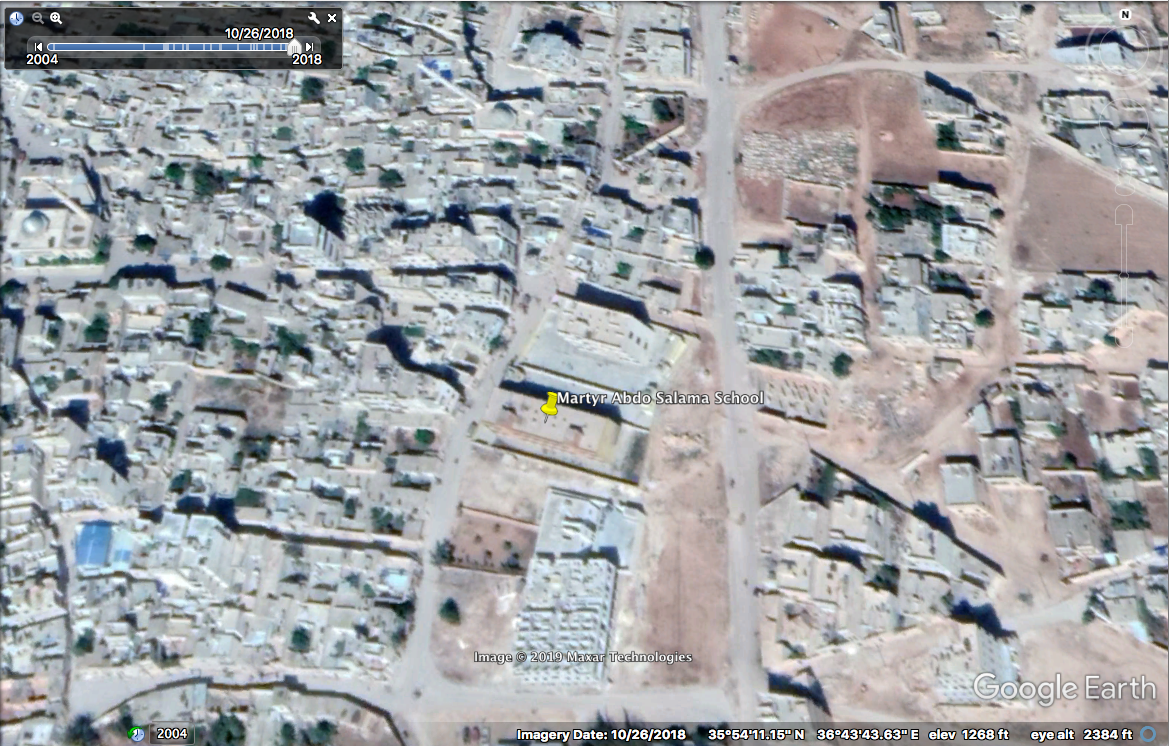 The location of Martyr Abdo Salama School as shown on satellite imagery from Google Earth.

Alongside its lasting residents, Sarmin has accepted thousands of those displaced in the governorate. Taqash estimated that the number of IDPs has reached around 15,500 people from surrounding cities and villages. The latest arrivals of IDPs to Sarmin, according to Taqash, were about 700 families coming from Maaret Al Numan (28 km from Sarmin), and its surrounding countryside, as well as 50 families from Saraqib (8 km away from Sarmin). This is in response to the increased air campaign against these villages beginning in mid to late 2019. Nevertheless, Sarmin was hit by a strike, killing long time residents and internally displaced men, women, and children. 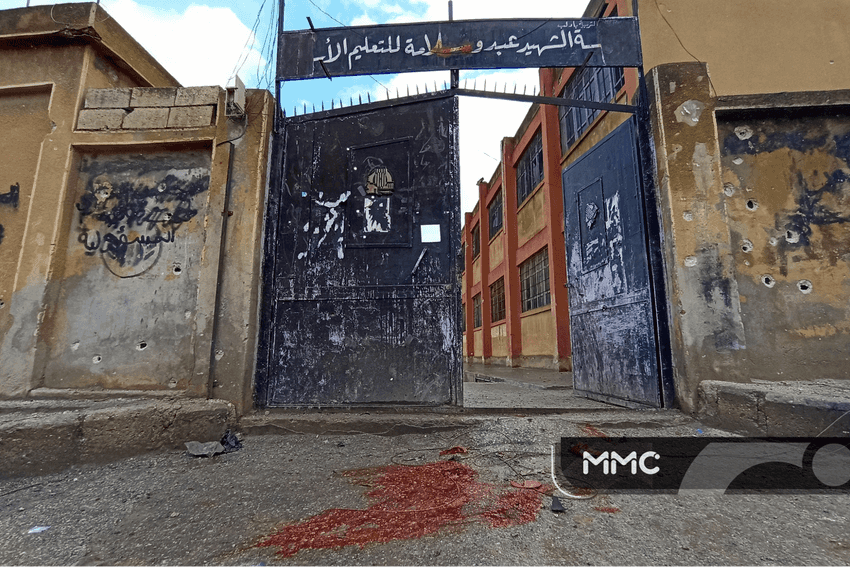 An image of the Martyr Abdo Salama School from after the incident posted by Macro Media Center.

Dozens of cluster bombs fell near and on the Martyr Abdo Salama School in the town of Sarmin on Wednesday morning January 1, 2020 at between 11:40 - 11:46. Reports confirming the strike on Sarmin began appearing at around 11:46 with the Facebook pages North Observatories and The Media Office of Binnish posting alerts of cluster bombs hitting the town’s center. Media activist Muti’ Jalal similarly posted an alert of an attack later including photos of the strike’s damage to the Uthman Iban Affan Mosque in Sarmin. 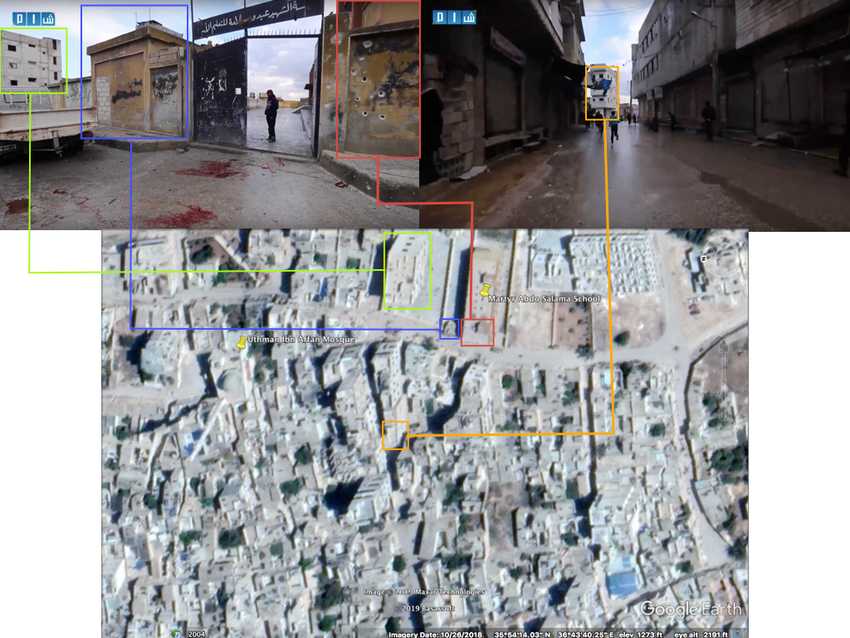 Stills taken from a Shaam News video report on the incident geolocated to the school and downtown Sarmin. 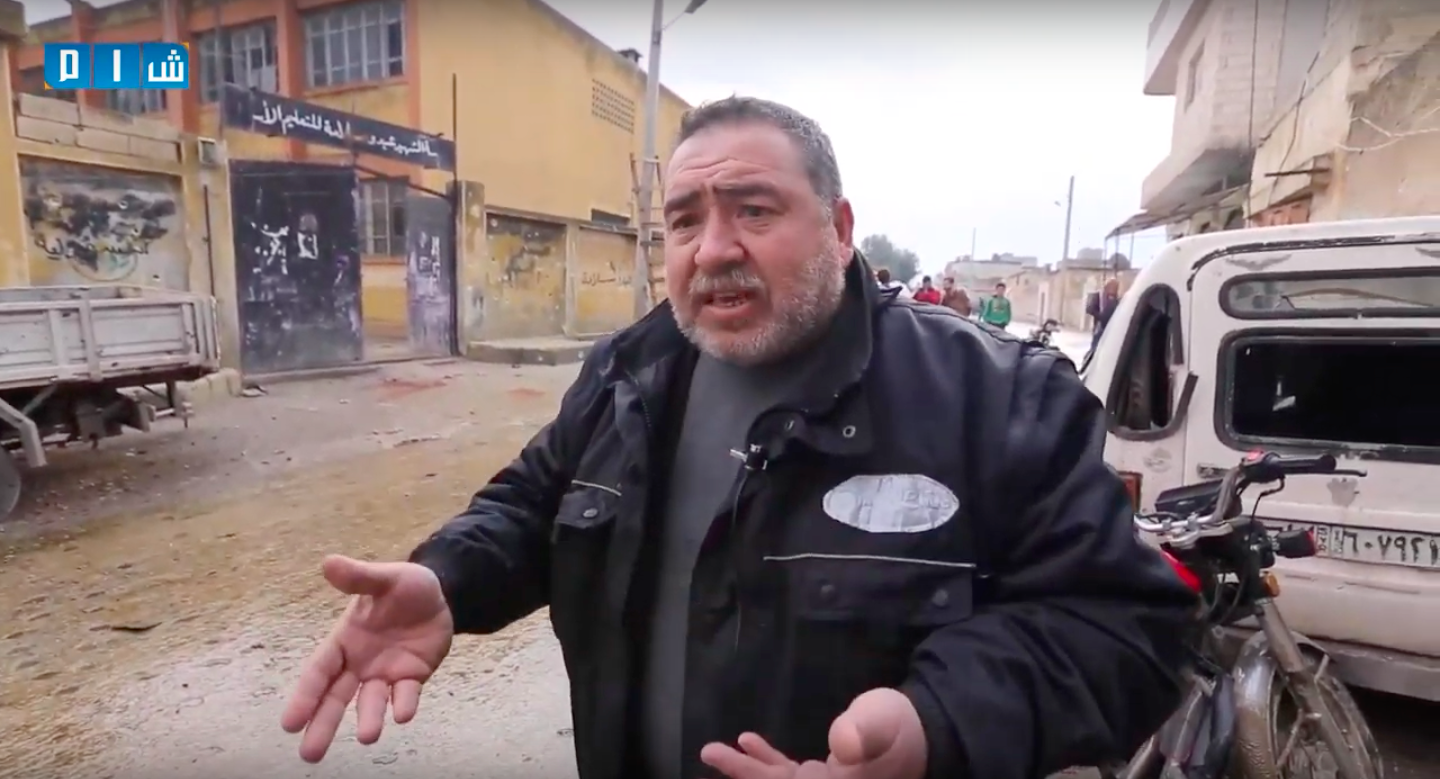 Given the weather during the time and day of the incident, it is difficult to ascertain visually by shadows what time the incident occurred. However, the post times reviewed in this section of the investigation as well as the weather shown in videos and images posted directly after the strike match the weather around Idlib on January 1, 2020. A still from a video report by Shaam News, for example, shows cloudy skies and wet ground from rain. This matches weather records for the areas around Idlib as reported by WolframAlpha. 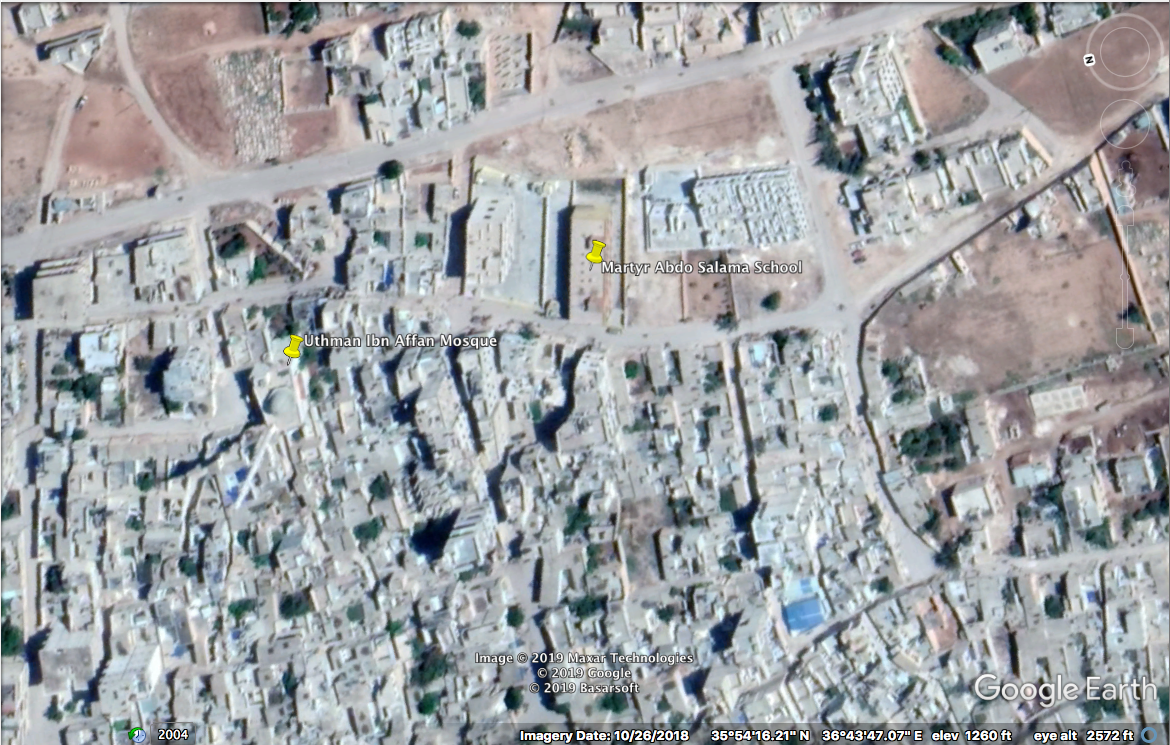 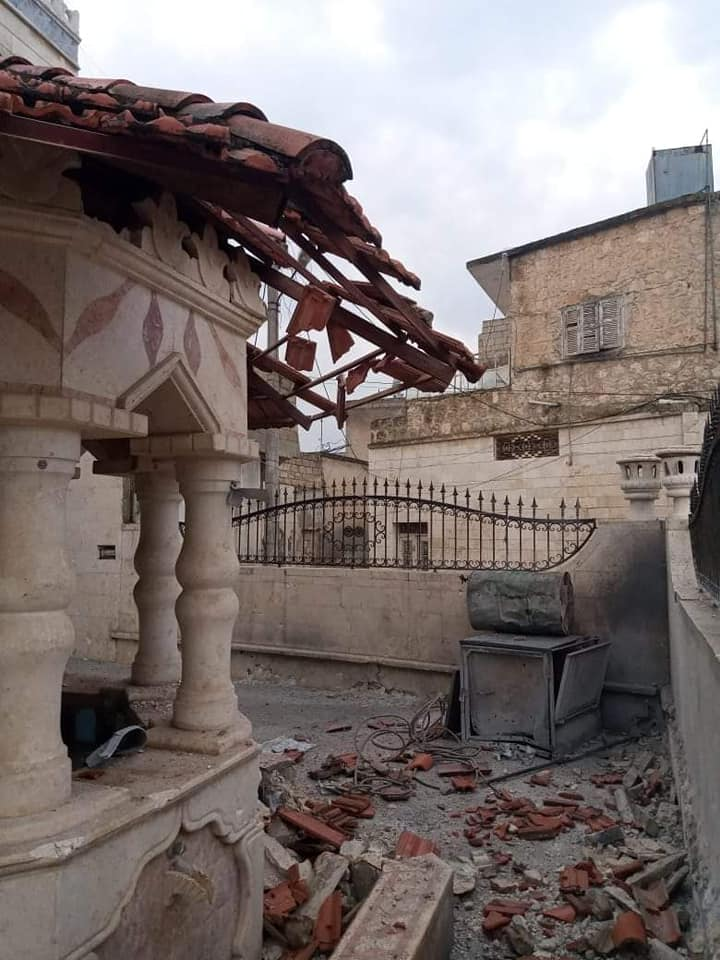 An image of the damage to Uthman Ibn Affan Mosque from the strike posted by Muti’ Jalal on Facebook and satellite imagery from Google Earth showing the location of the mosque and school. The mosque is around 100 meters away from the school.

Shortly thereafter, a number of posts began reporting damage to the school and civilians killed by the strike with images and videos showing the rescue efforts by first responders. Al Jazeera and the Syrian Civil Defense posted videos taken directly after the strike of civilians injured and killed as well as their rescue efforts. Video reports from Baladi News, Macro Media Center, and Shaam News Network feature interviews with residents who witnessed the strike. Confirming the date, time, and severity of the strike, residents claimed that the missile targeted the town’s center to “intimidate and kill civilians.” In two video reports, Syria TV confirmed in interviews with Firas Khalifa, a member of the Information Office for the Civil Defense in Idlib, and Muhammad Fadhil, a parent in the town, that the strike hit the school killing nine civilians including five children and two women as well as wounding fifteen others.

Satellite imagery from Digital Globe of the school from before and after the strike. 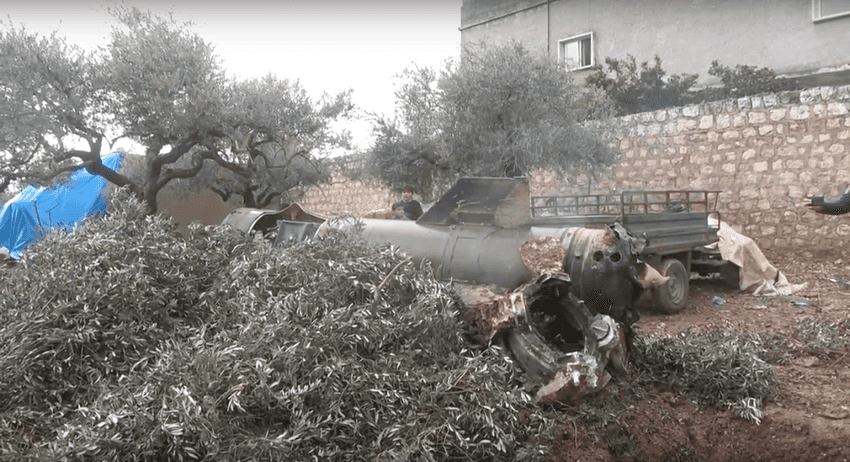 A still from a video uploaded by Mohammed Belaas showing the canister carrying cluster munitions.

Well after the strike, journalist Mohammed Belaas and the Syrian Network for Human Rights published a number of reports confirming that nine civilians were killed by a medium range missile “believed to be loaded with cluster munitions.” This claim is supported and corroborated by other open source information showing a 9M79 Tochka Missile, which landed 460 meters away from the school. 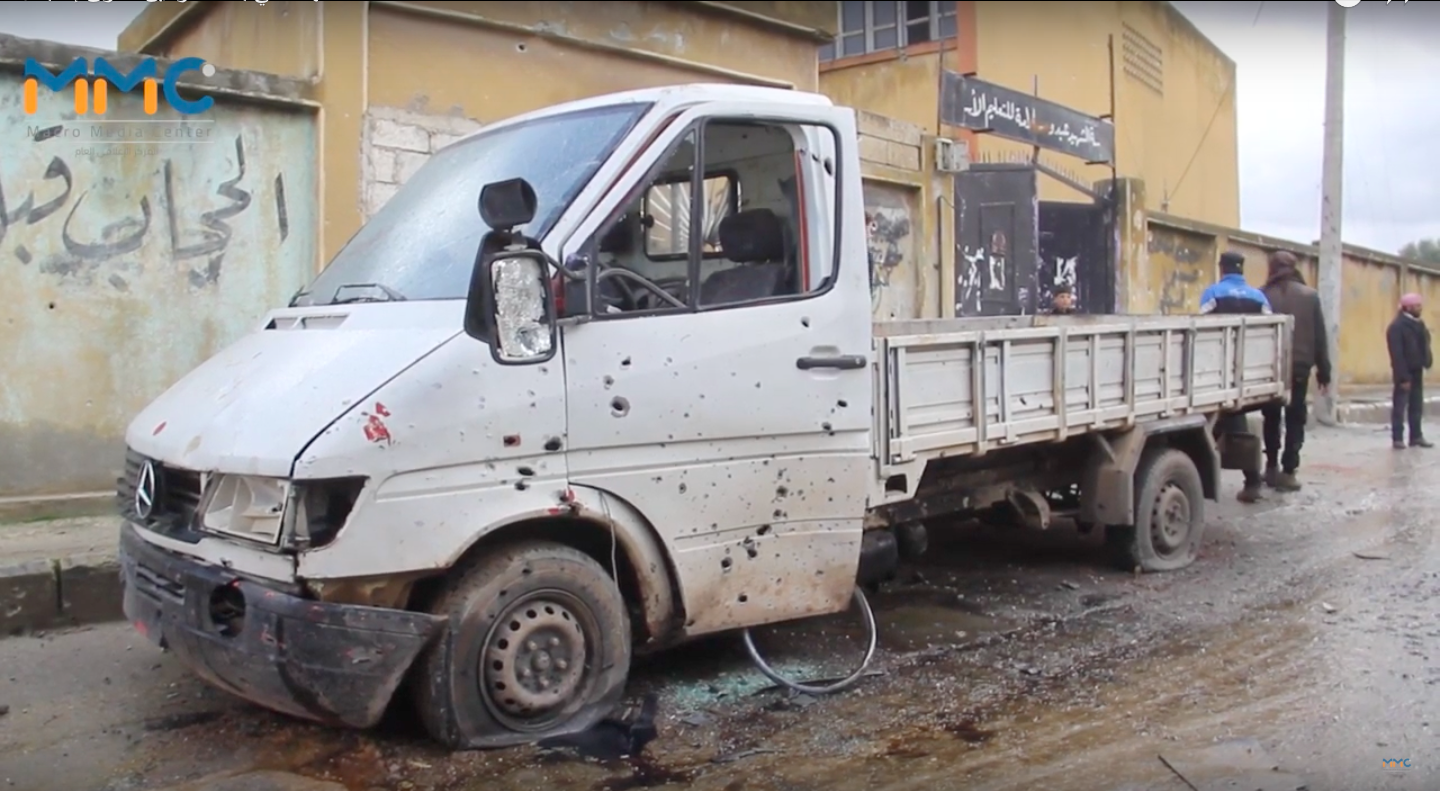 image from the Macro Media Center 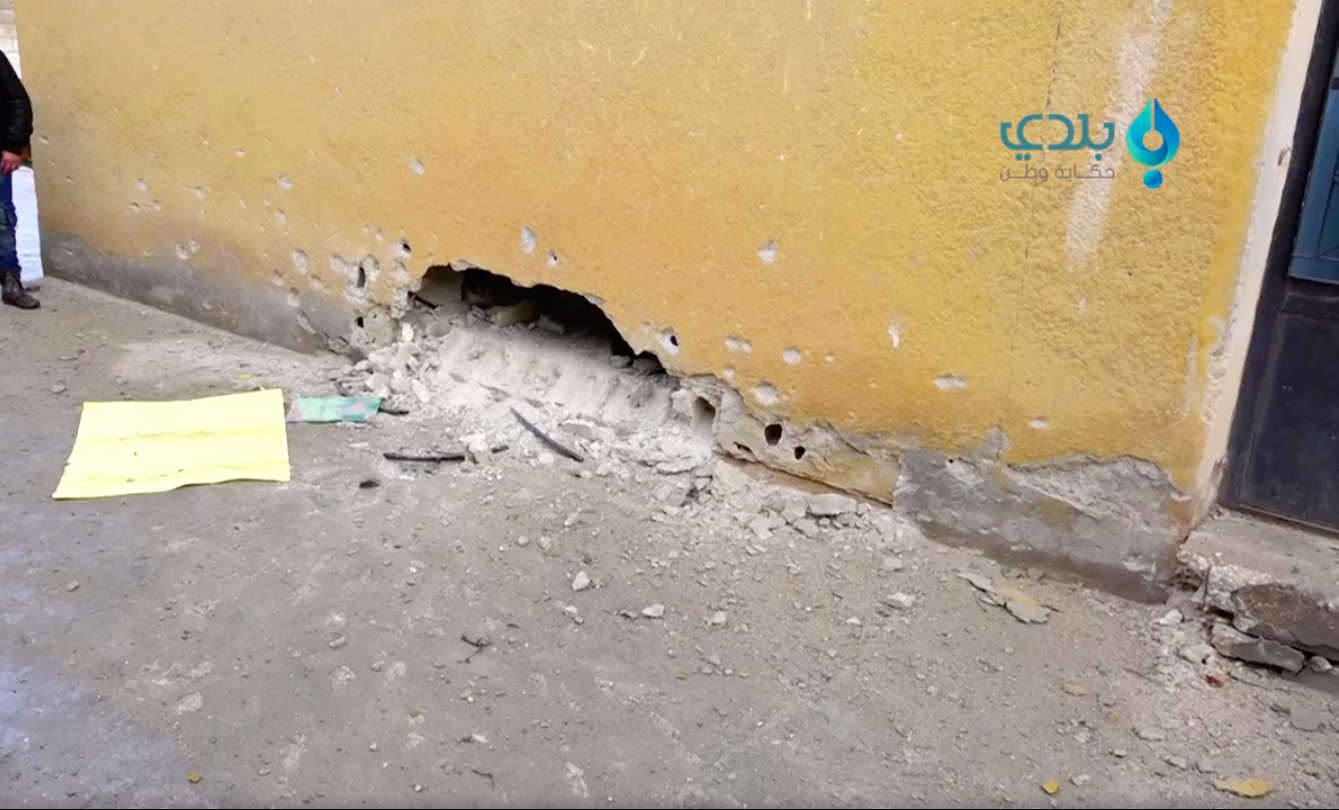 image from the Syrian Civil Defense 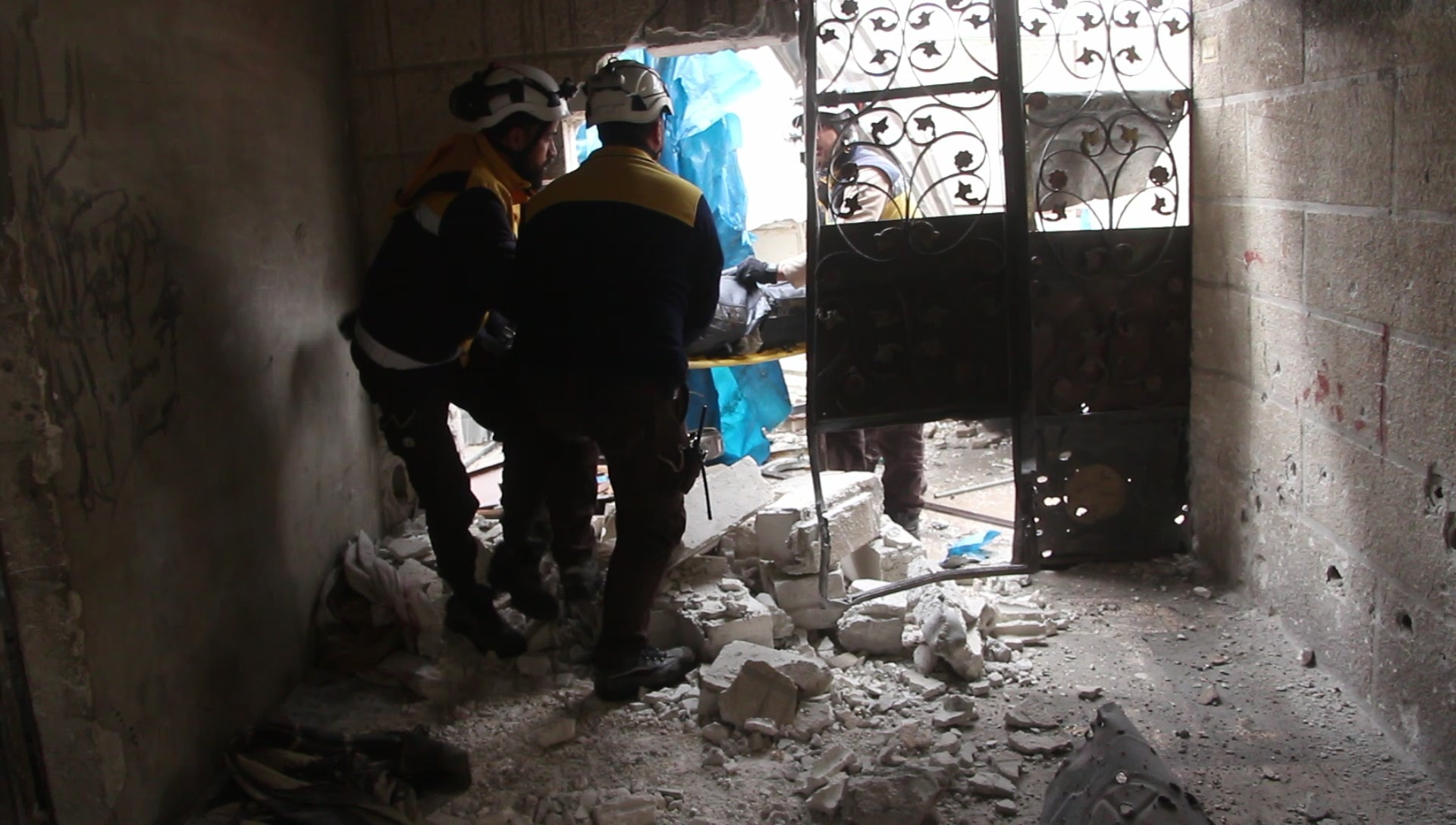 Images and stills from the Macro Media Center, Baladi News, and the Syrian Civil Defense show the damage to the school from after the strike. Small holes in the wall of the school’s building and a car parked nearby indicate that submunitions such as cluster bombs may have possibly been used in this strike. 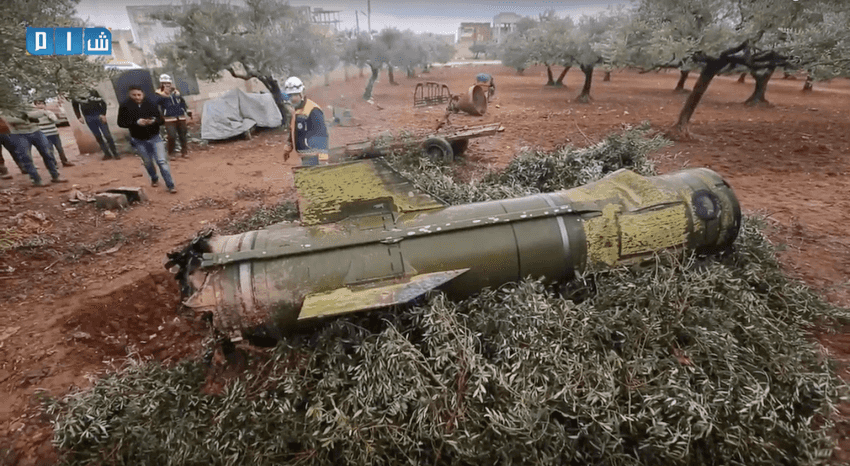 A still from a video taken by Shaam News of the munition.

According to the head of Sarmin’s town council, Ali Taqash, the cluster bombs which hit the town’s center were carried by a Tochka missile, which fell around 460 meters away from the school. 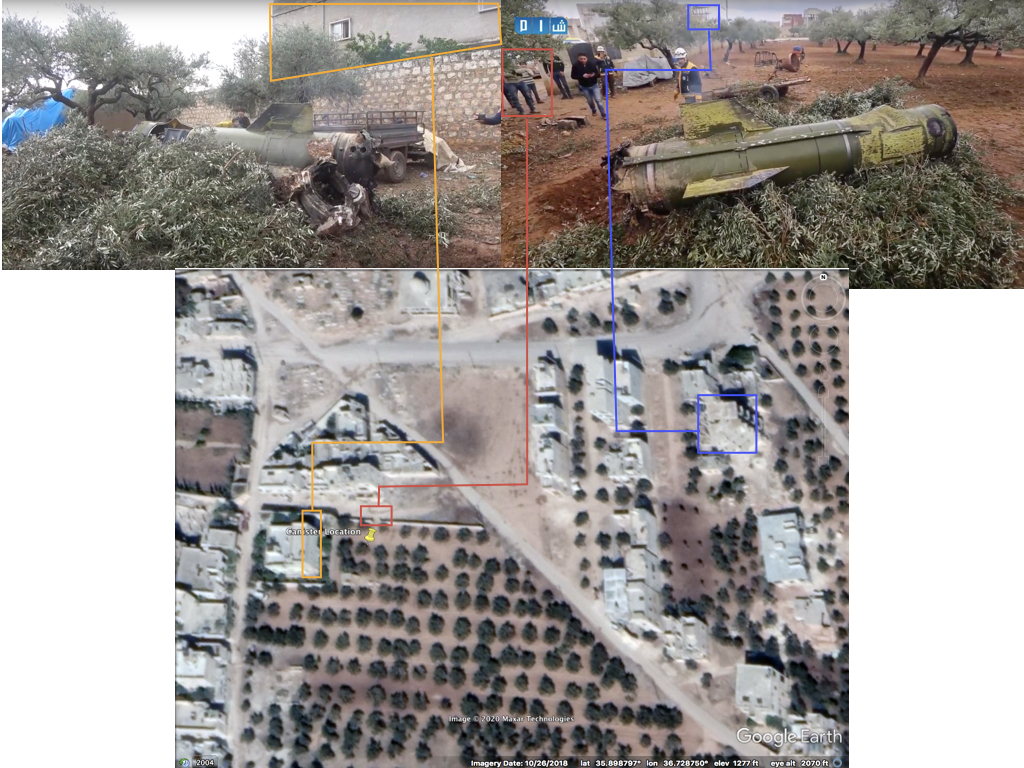 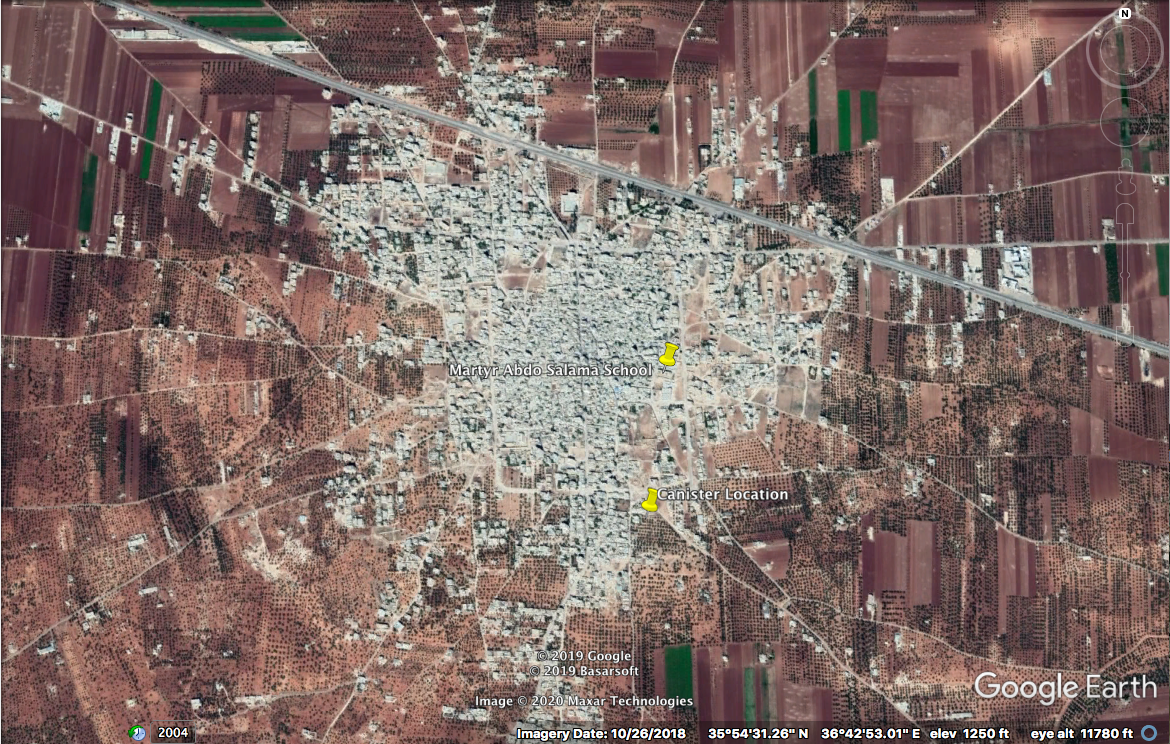 Geolocation of where the canister fell using images from Shaam News and Twitter user ZP39A.

A number of open source videos and images feature a munition canister that matches the 9M79 Tochka Missile. Images found online show the 9M79 label on the canister. Moreover, the damage to schools and cars parked nearby shown in images and videos, such as those outlined above, match the typical damage in strikes using cluster munitions. Previously used in a strike on Qah IDP Camp, the 9M79 Tochka Missile is surface-to-surface and often carries cluster munitions. The damage to the school and the position of the canister away from the impact site indicates that it likely held and dropped cluster munitions over or near the school before hitting the ground. Human Rights Watch and local news reports confirm the usage of cluster bombs in this strike and emphasize the severity of its damage on the town and to its residents.

An image of the munition in Sarmin compared with an image of a full 9M79 Tochka Missile in Kazakhstan. 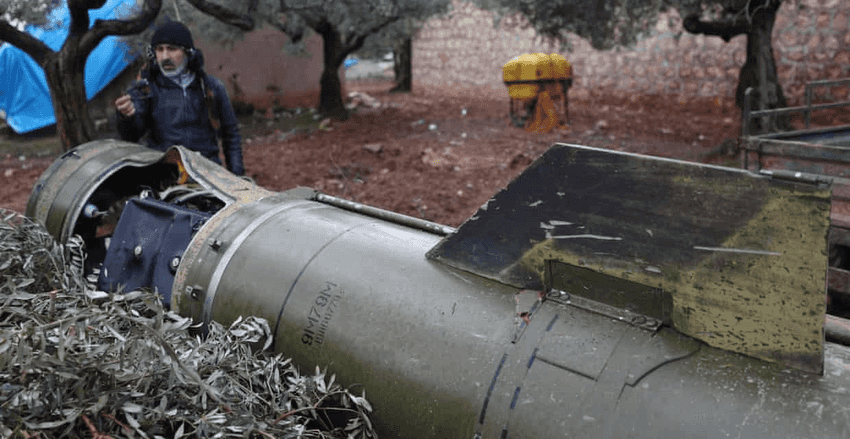 Images found online show the label on the canister, which indicates the weapon is a 9M79 Tochka missile.

Initial posts from directly after the strike feature images of the victims in and around the school. Showing the efforts to rescue and recover those injured and killed, posts from the Facebook page Al Hal Net provided initial estimates of three to six civilians killed in the strike.

Later after the strike, Muti’ Jalal, a member of the Syrian Civil Defense, released on Facebook the age and names of those injured and killed. Some of these names could be cross referenced with other posts on social media. 3 of those reported as injured in Jalal’s post later died from their wounds.

Those reported as killed:

Those reported as injured:

According to flight observation data, no flights were spotted over, near, or around Sarmin an hour before, during, or an hour after the time of the incident. This further corroborates statements that the town was hit by a surface-to-surface missile. 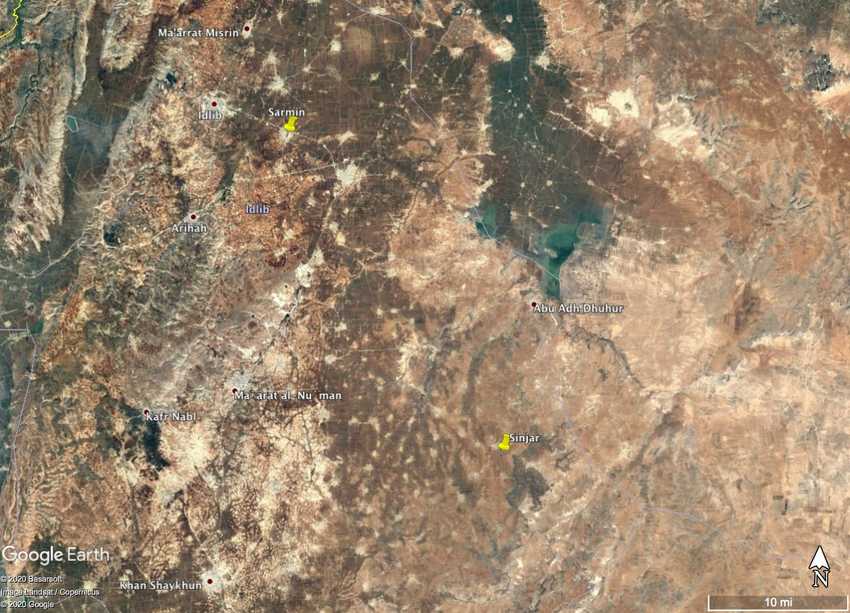 The usage of a Tochka missile, not yet reported as used or obtained by opposition groups, indicates that Syrian government or Syrian government-affiliated forces may be responsible for the strike. This is corroborated in reports by Human Rights Watch, Enab Baladi, Shaam News Network, Orient News, and the Syrian Network for Human Rights. Some reports claim the missile came from the area around Sinjar, 40 km southeast of Sarmin in government-held territory and well within the missile’s range.

Using the information outlined above, the Syrian Archive was able to confirm that Sarmin, its school, and the surrounding areas, were hit by a surface-to-surface missile on January 1, 2020 at around 11:40-11:46. Damage to the surrounding buildings and cars as well as a munition found 460 meters away from the school indicate that the missile likely held cluster munitions. The strike killed 9 civilians and injured at least 12, some of which were children. Although Syrian Archive is unable to definitively identify the perpetrator of the strike, the usage of a 9M79 Tochka Missile suggests that the Syrian government or Syrian government-affiliated force may be responsible for the incident.