investigation reveals the targeting of a health care center in Daraa

Following several days of intense shelling in the Daraa govenorate that began on Tuesday June 19, 2018, Syrian government forces launched an offensive against armed opposition strongholds in the southwestern province. In this offensive, according to the “independent, politically and non-religiously affiliated” news organization Radio Rozana, Russian and Syrian government warplanes launched heavy raids on towns under opposition faction control in the Daraa governorate. This investigation examines the attack on Busra Al Harir on June 24, specifically the destruction of the town’s Healthcare center.

Syrian Archive conducted an investigation into the incident, based on:

(1) Securing, analysing, and verifying of around 50 videos and images uploaded to social media networks purportedly showing the incident; (2) Analysing satellite imagery as well as flight observation data; (3) The combined analysis of these sources culminating in the present report. Complementing each other, they provide information regarding the attack’s date and time, location, and extent of damage.

Examining all information available on the attack, the investigations team developed an understanding of the incident and potential perpetrators.

The town of Busra Al Harir is located 90 km southeast of Syria’s capital, Damascus, and is considered strategically important because of its proximity to the M5, a highway which runs from southern Syria through Damascus and Homs to Aleppo. Given its strategic location, pressure was placed on retaking Busra Al Harir with soldiers claiming it would open up and ease the retaking of Daraa for government forces.

Although in a strategic location, Busra Al Harir lies just within the established De-escalation Zones. These zones, where hostilities were agreed to be halted, were established between Russia, Iran, and Turkey in May 2017. These zones includ the entire Idlib governorate, some parts of the Latakia, Hama, and Aleppo governorates, as well as some parts of northern Homs, Eastern Ghouta in the Damascus countryside, and the cities of Daraa and Quneitra in southern Syria. 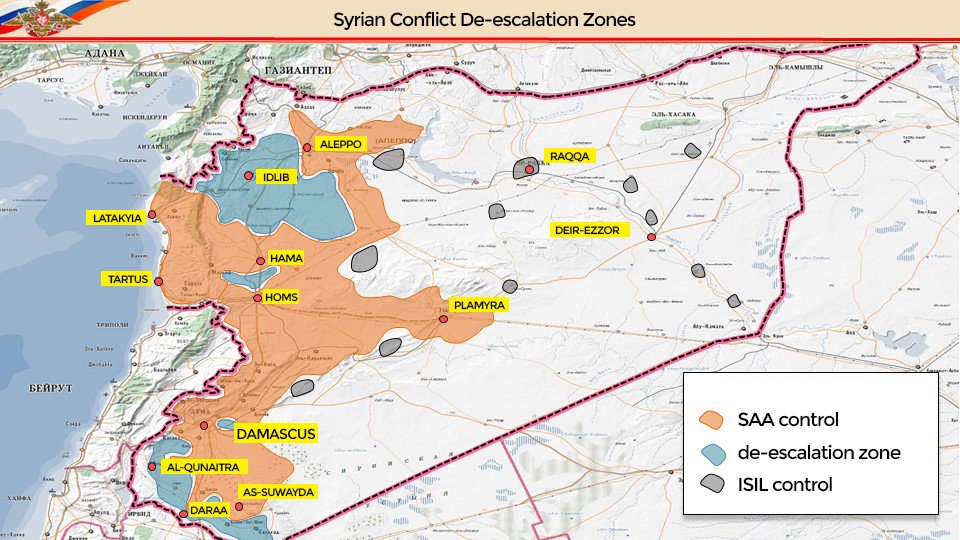 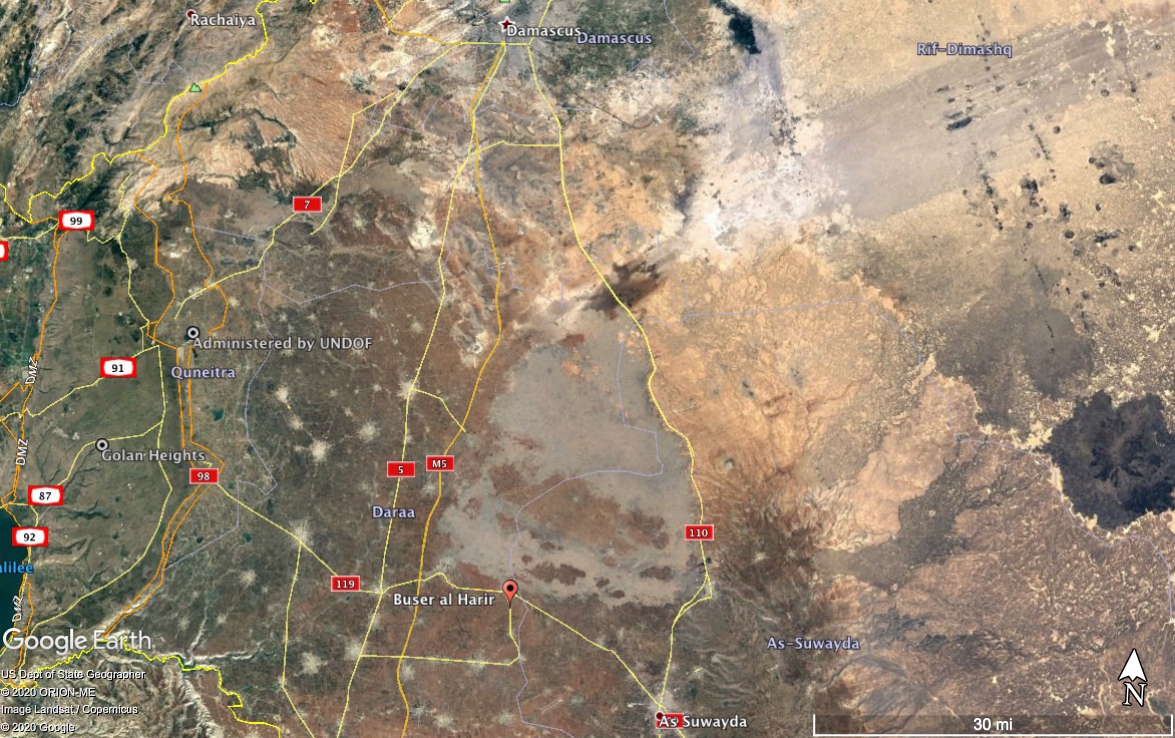 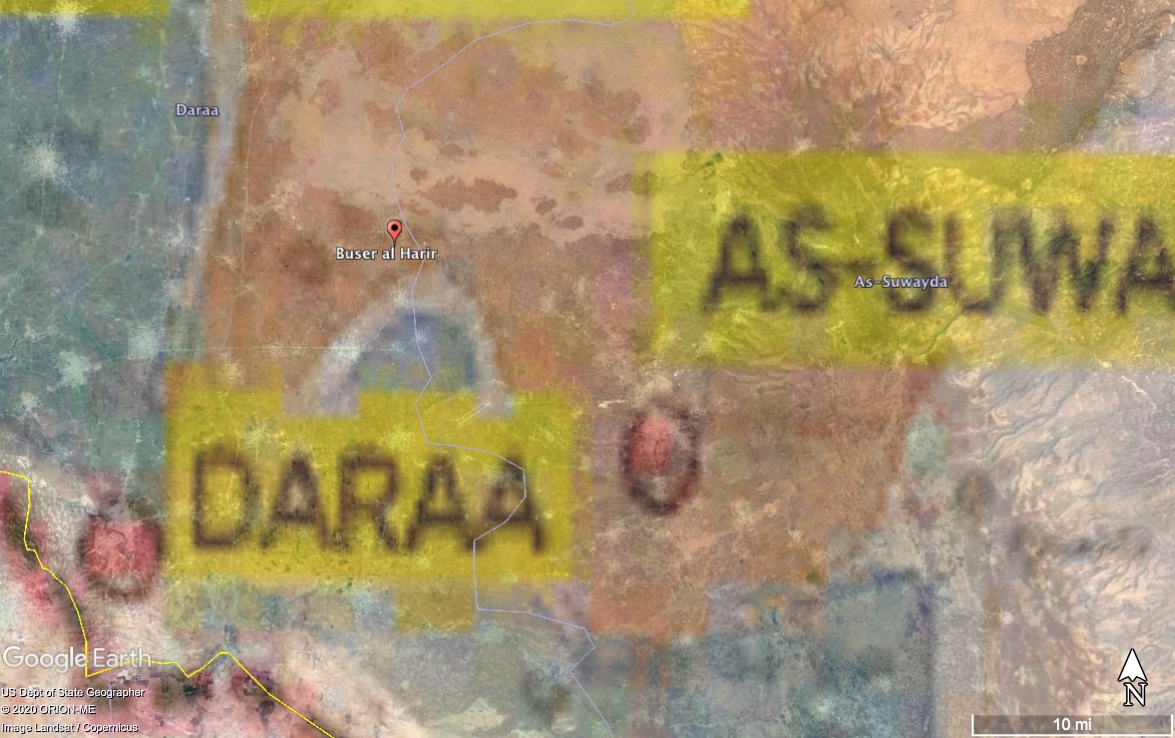 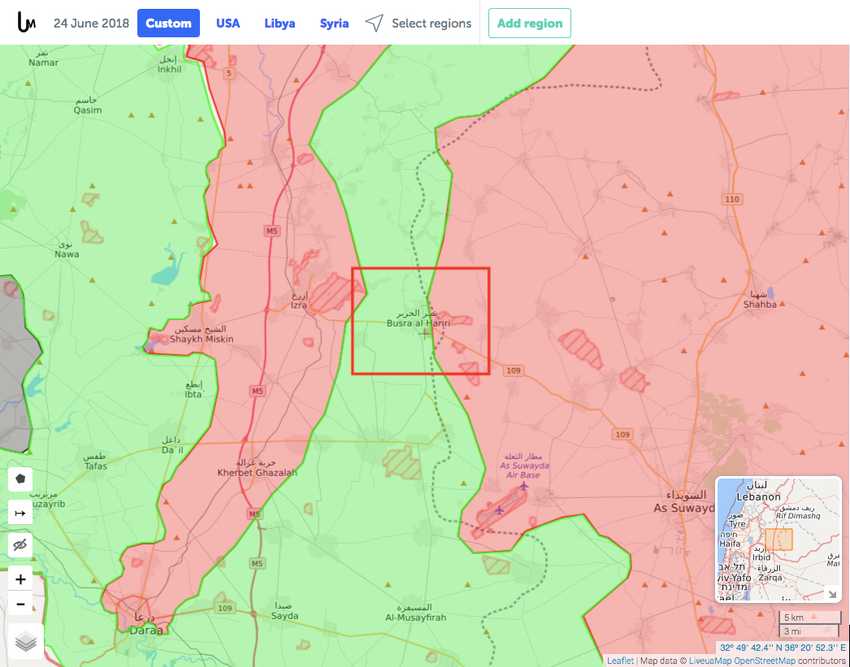 A screenshot from LiveUAMap showing the areas of control around Busra Al Harir the day of the attack. Government territory is in red with opposition territory in green.

The fight for Busra Al Harir began on June 24 with posts, videos, and images reporting that morning of Syrian government forces and its accompanying militias shelling the town. At 10:01, Radio Sham FM posted alerting of government forces attacking the town. Videos posted, the morning of the attack, allegedly also show the early ground artillery shelling and airstrikes on Busra Al Harir. Additionally, Smart News published images from June 24 featuring the air and ground attack on Busra Al Harir. These posts alerting of air raids on the town are further confirmed by flight observation data (featured later in this report), which shows planes flying above the town in the morning beginning at around 09:00.

In the evening of June 24, after air support from allegedly Russian and Syrian planes, the Syrian army and its accompanying militias entered Busra Al Harir. Posts announcing the army’s arrival appeared at around 19:40. Moreover, soldiers, such as Abdallah Malah, posted at around the same time images of themselves allegedly on the front lines near the town.

Shortly after these initial posts and the days after the raid, soldiers posted videos and images of themselves in Busra Al Harir with captions announcing and celebrating the conquering of the town as well as describing the tactics used by the government to seize the territory. Soldiers in these posts, specifically in these images, were identified by Syrian Archive as affiliated with or members of the 5th Corps’ 5th Brigade of the Syrian Arab Army (SAA). Moreover, other images indicate soldiers of the SAA’s Tiger Forces as in Busra Al Harir after the attack. Two days after the raid on June 26 at 15:29, Feras Hasan Al Saoor, a member of the Tiger Forces, posted a video of himself in front of Busra Al Harir’s Free Police station. In the video, Al Saoor describes the attack as lasting 24 hours and calls the retaking of Busra Al Harir a strategic win that opens up Daraa for government forces. Videos and images like Al Saoor’s show soldiers in and around the city the days after the attack. Images additionally show commanders of the Tiger Forces’ Hawashem Regiment and Hawareth Regiment amongst the soldiers celebrating the victory. Alongside media posted by the soldiers themselves, SANA, a state sponsored news organization, published a report detailing the raid. 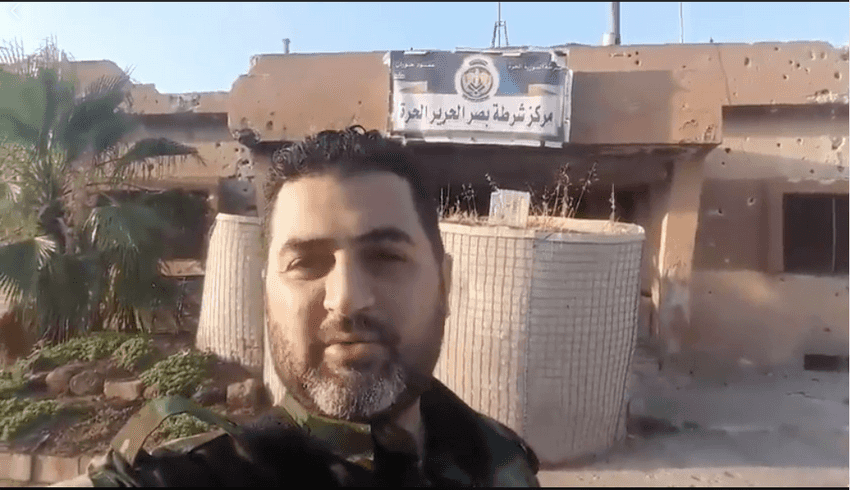 A still from Al Saoor’s video taken in front of the town’s Free Police station.

To confirm the retaking of Busra Al Harir as well as posts by soldiers declaring a victory, Syrian Archive geolocated the photos of soldiers around the town. These verified images and videos show soldiers freely walking in central Busra Al Harir and its outskirts further confirming a government victory.

Geolocated images from Aos Eid, a member of the Tiger Forces’ engineering unit, and a video posted by the Facebook page Damas Post taken in western Busra Al Harir after the attack on the town.

Amongst the intense fighting by ground and air occurred during this raid, the healthcare center in Busra Al Harir, as mentioned in the Syrian Human Rights Committee’s annual report, was attacked and destroyed revealing the severity of the fight for southern Syria.

History of the Facility

Damaged in the attack in June 2018, Busra Al Harir Health Care Center was established on November 15, 2009 by the Syrian government as a “Family Medical Center,” according to an article from a Busra Al Harir communitiy website sponsored by the Syrian government’s Ministry of Local Administration. Providing images, the article shows the medical facility from before the attack as well as it’s location. 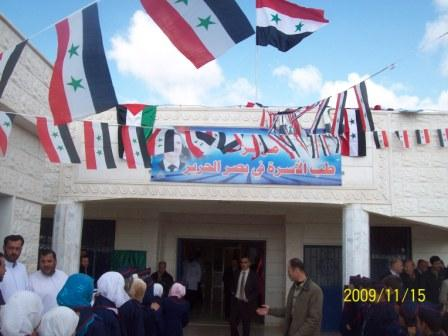 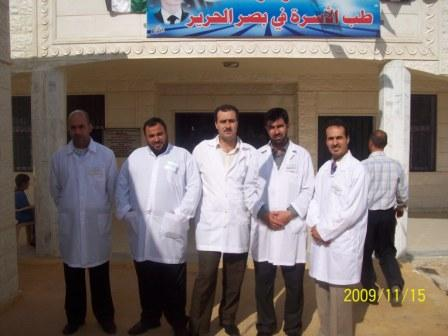 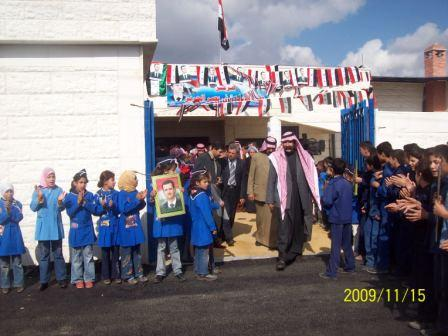 Images from the Ministry of Local Administration of the medical facility’s opening in 2009.

The Syrian Archive was able to confirm through openly available images online that the center bombed in 2018 was the same as the one established in 2009. This indicates that the Syrian government had some knowledge of the medical facility’s existence and location during the time of the raid on Busra Al Harir. Although originally a government facility, the health care center was rehabilitated and, before the attack, supported by the Union of Medical Care and Relief Organizations (UOSSM) serving 5,000 patients a month. 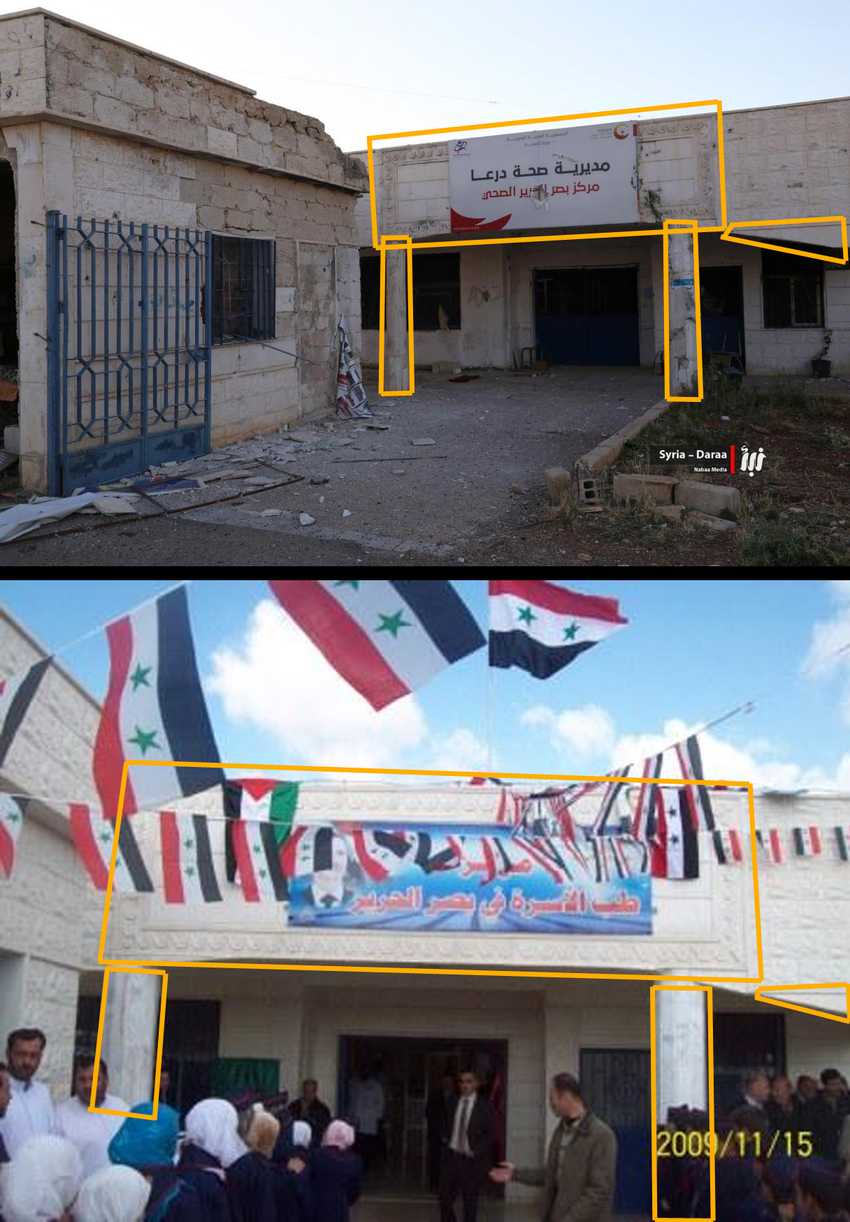 Images from Nabaa News Agency taken in 2018 and from the Ministry of Local Administration in 2009 of the medical facility. Both sets of images show consistent features including the main entrance, the gate, and the color of the building confirming that they are the same facility. 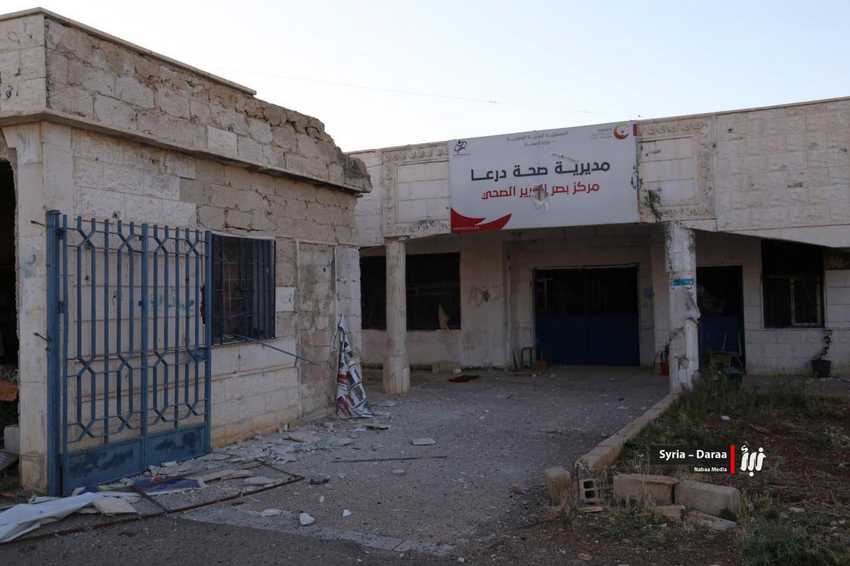 An image published by Nabaa News Agency of the healthcare center from after the attack.

According to the UOSSM and verified open source media, on June 24, during the raid on the town, the Busra Al Harir Health Care Center in western Busra Al Harir was attacked by air causing extensive damage to the facility. The UOSSM posted on June 25 about the attack claiming the facility was hit at 17:00 on June 24 and “suffered extensive damage.” Flight observation data shows planes and helicopters were circling above Busra Al Harir at around 17:00, further confirming that the center was hit by an airstrike. 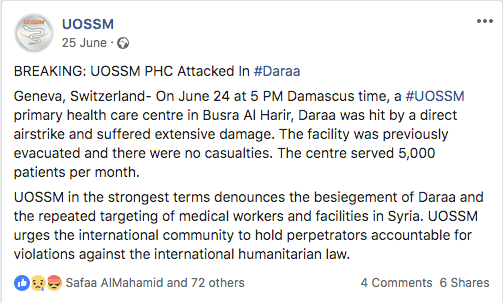 Nabaa News Agency posted several images of the hospital after the attack reporting it was now out of service. A number of Facebook pages, such as Houran News posted on June 24 about the attack also confirming the facility was pushed out of service by airstrikes. Additionally, Smart News published a video report on the attacks on Busra Al Harir showing the outside of the facility. 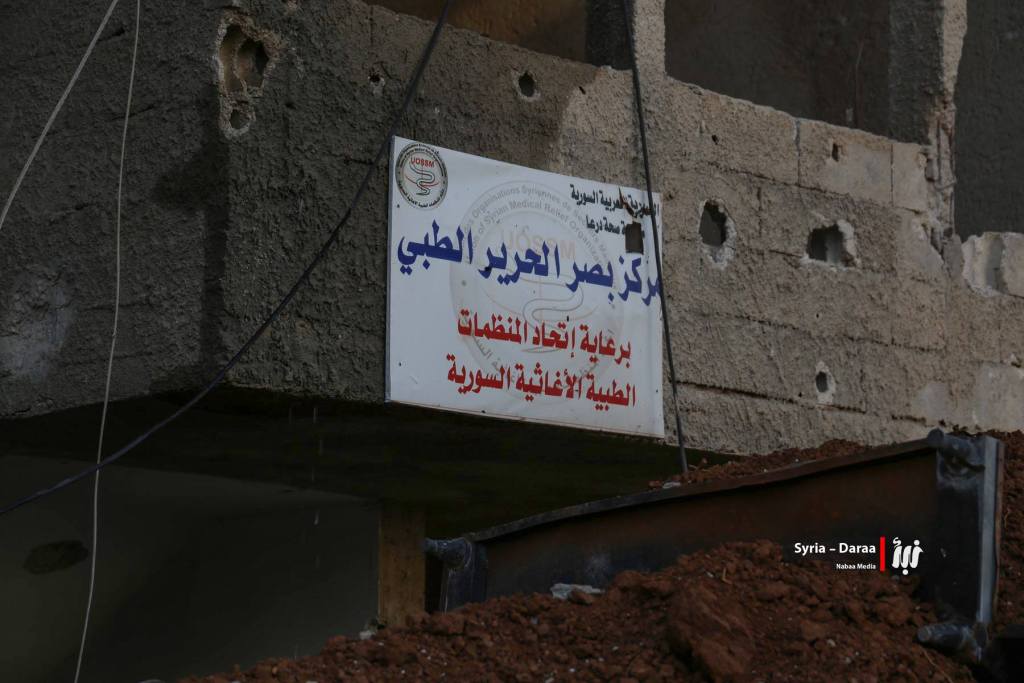 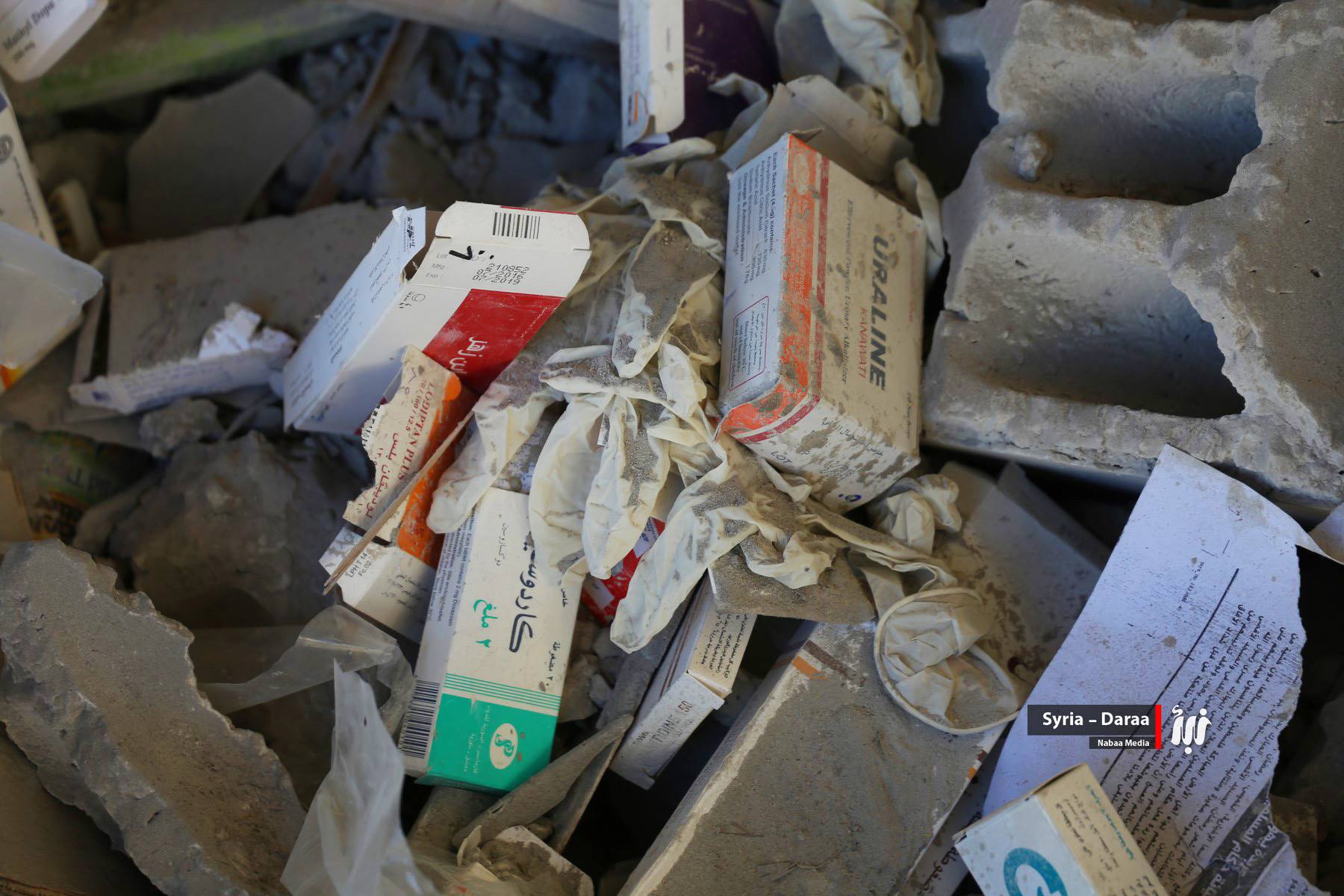 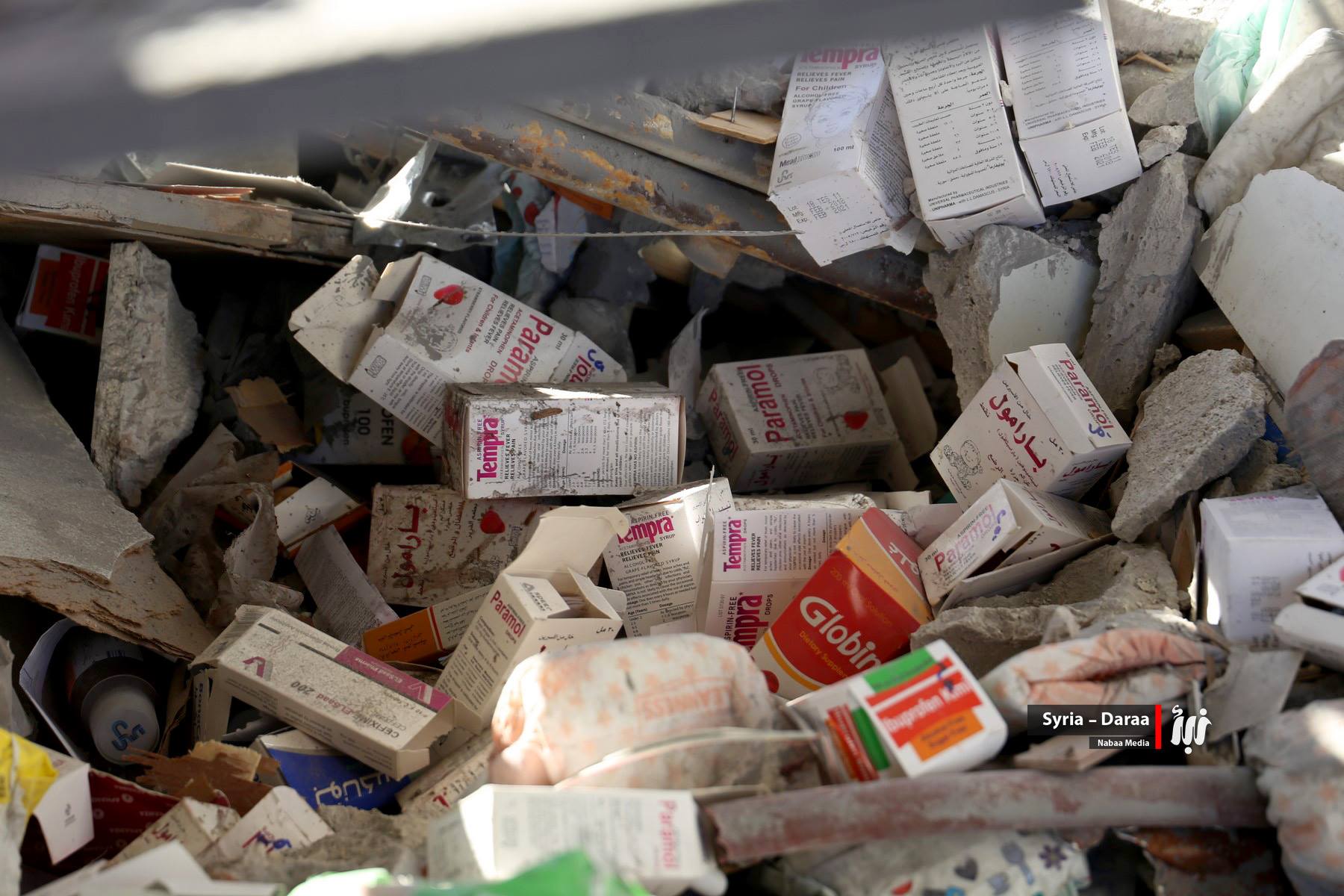 Images from Nabaa News Agency of the hospital and medicine destroyed by the attack.

In verifying the attack on the Busra Al Harir Healthcare Center, the Syrian Archive located the medical facility through images and videos from the center’s opening and througout the conflict. An Al Jazeera video report on the town from 2015, for example, shows Busra Al Harir and the surrounding areas. From the photos published of the attack and from the facility’s opening in 2009, the Syrian Archive was able to identify consistent landmarks, including a school and mosque neighboring the facility, which reveal the location of the the attacked medical center to be in western Busra Al Harir.

The geolocation of the medical facility using the Al Jazeera video report on the town. 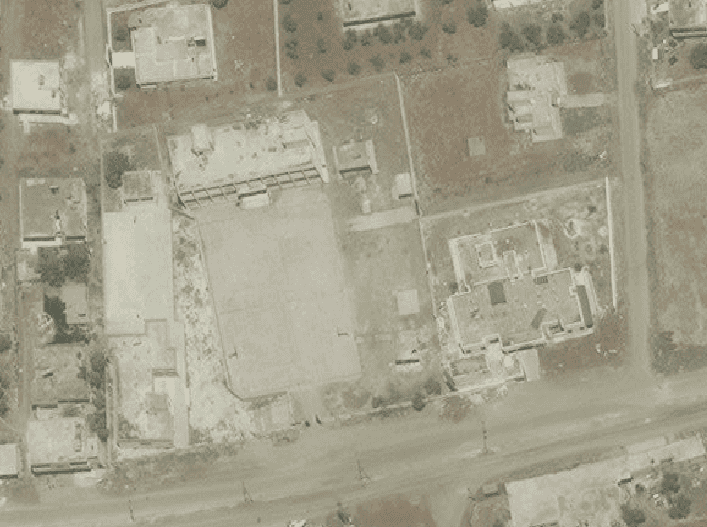 Satellite imagery on June 9th 2018, shows the medical facility (on the right) and the neighboring school (on the left).

To provide a further layer of verification, the Syrian Archive cross referenced findings from open source media with flight observation data from a spotter organization. Data for flights occurring on the day of the attack (June 24) near and in Daraa, As Suwayda, and Rif Damashq was closely analyzed.

Beginning in the morning (at around 09:00) and into the late afternoon on June 24, warplanes from the Shayrat and T4 West Airbases in Homs, Hmemim Airbase in Lattakia, Dumayr and Sin Airbases in Rif Damashq, and Khalkhalah Airbase in As Suwayda were spotted taking off heading towards Daraa. The aircraft departing from these airbases included the Su-22 (Fitter), Su-24 (Fencer), MiG-21 (Fishbed), MiG-23 (Flogger), government light ground attack warplanes (identified by our flight observation data partner as either Yak 130 or L-39 planes belonging to the Syrian government), and Mi-8 (Hip) helicopter.

The common practice of circling by warzone aircrafts, as spotted frequently over Busra Al Harir and neighboring towns, indicates target acquisition and/or preparation for an immenint attack. Furthermore, the circling over Busra Al Harir, as well as other neighboring villages, on June 24, the day of the attack, further corroborates the air attack on the health care center in Busra Al Harir. Additionally, given that the majority of the planes spotted over Busra Al Harir are frequently used by Syrian forces, it is likely that the perpetrator responsible for these attacks is the Syrian government. Although flight observation data matches reports of a Syrian government effort to retake the governorate, no evidence available shows the direct involvement of the observed aircraft in the attack on Busra Al Harir and its healthcare center.

In the offensive to retake Daraa, Russian and Syrian planes attacked villages and cities around the govenorate further damaging and destroying its vital facilities. On June 24, in the government effort to conquer Busra Al Harir, the town’s health care center was attacked by air pushing it out of service. The date of the attacks and extent of damage to this facility were confirmed through flight observation data and open source media. Although Syrian Archive is unable to definitively identify the perpetrators of these attacks, flight observation data, open source media reporting of Syrian warplanes flying over Busra Al Harir, and the context of the mounting Syrian government effort to retake Daraa point towards the Syrian government as potentially responsible for the attack.