On March 22, 2018, Harem was hit by two missiles around 16:00, which damaged the town’s street market as well as a nearby residential complex. Destroying the market and collapsing a residential building, the attack killed at least 31 civilians and injured over 50 others.

Syrian Archive conducted an investigation into the incident, based on the steps of:

(1) Securing, analysing, and verifying of 31 videos and images uploaded to social media networks purportedly showing the incident; (2) Analysing satellite imagery as well as flight observation data; (3) The combined analysis of these sources culminating in the present report. Complementing each other, they provide information regarding the attack’s date and time, location, and extent of damage.

Examining all information available on the attack, the investigations team developed an understanding of the incident and potential perpetrators. 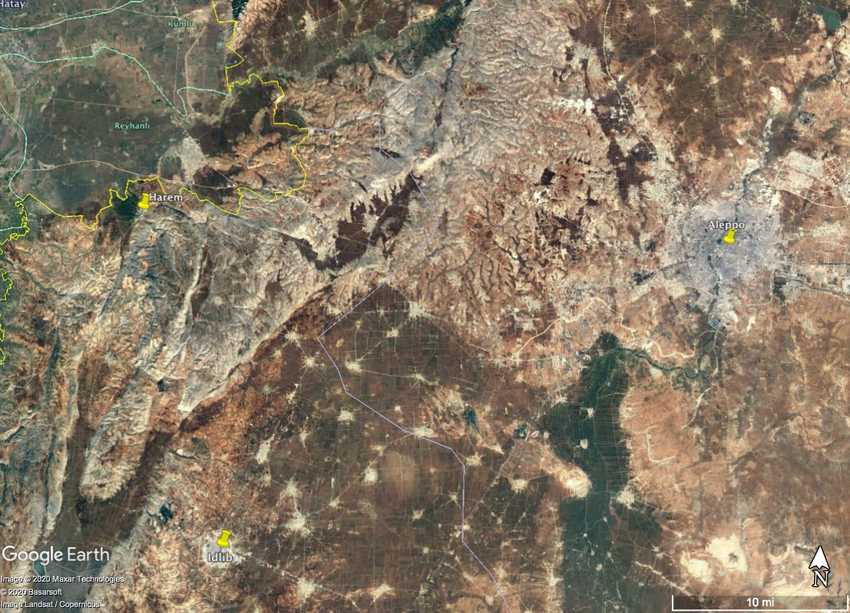 Satellite imagery from Google Earth showing the location of Harem in northeastern Idlib near the Turkish border.

Harem is a city in northern Idlib approximately 2.3 km away from the Turkish border. Becuase of its proximity to Turkey, the city houses thousands of displaced Syrians, according to the Qatar Red Crescent. These displaced peoples as well as other residents of Harem have suffered from several attacks, such as in September 2017, that has severely damaged the town and killed civlians. These attacks directly violate the 2017 De-Escalation Zones agreement made by Iran, Russia, and Turkey. Although Harem lies well within the De-Escalation Zone, it as well as neighboring villages have suffered from numerous air attacks.

After collecting and analysing images and videos published on social media, Syrian Archive concluded that on March 22, 2018 at roughly 16:00 the town of Harem was hit by two missiles on the popular market and a nearby residential building. The strikes severely damaged the market burning stores and the surrounding buildings as well as collapsed a residential building with civilians inside. This attack killed over 31 people and injured over 50 others. 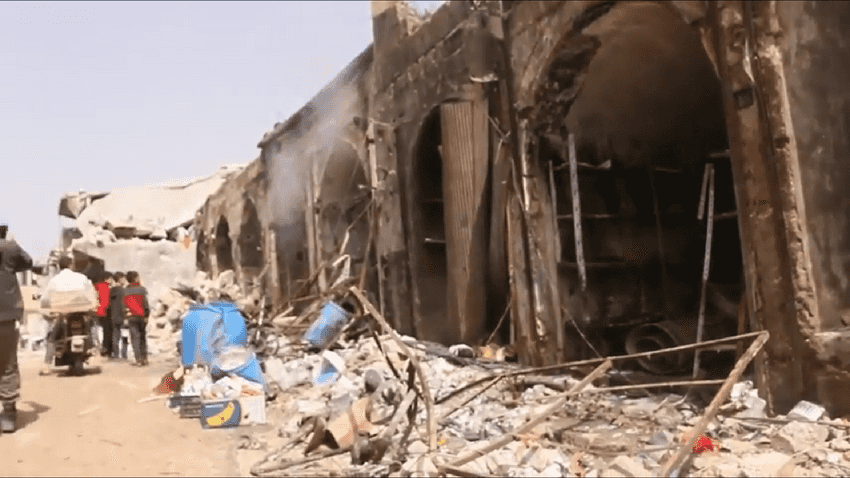 The location of the first strike as shown in a video posted by the Syrian Civil Defense in Idlib.

The first missile hit the popular market near the Grand Mosque and the neighboring vegetable market. 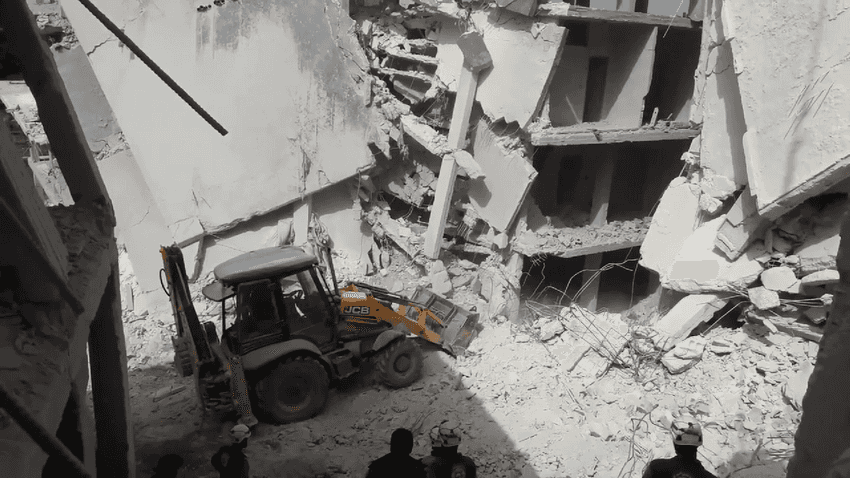 The location of the second air raid as shown in a video posted by the Syrian Civil Defense in Idlib.

The second airstrike hit and severely damaged a residential complex inhabited by civilians. 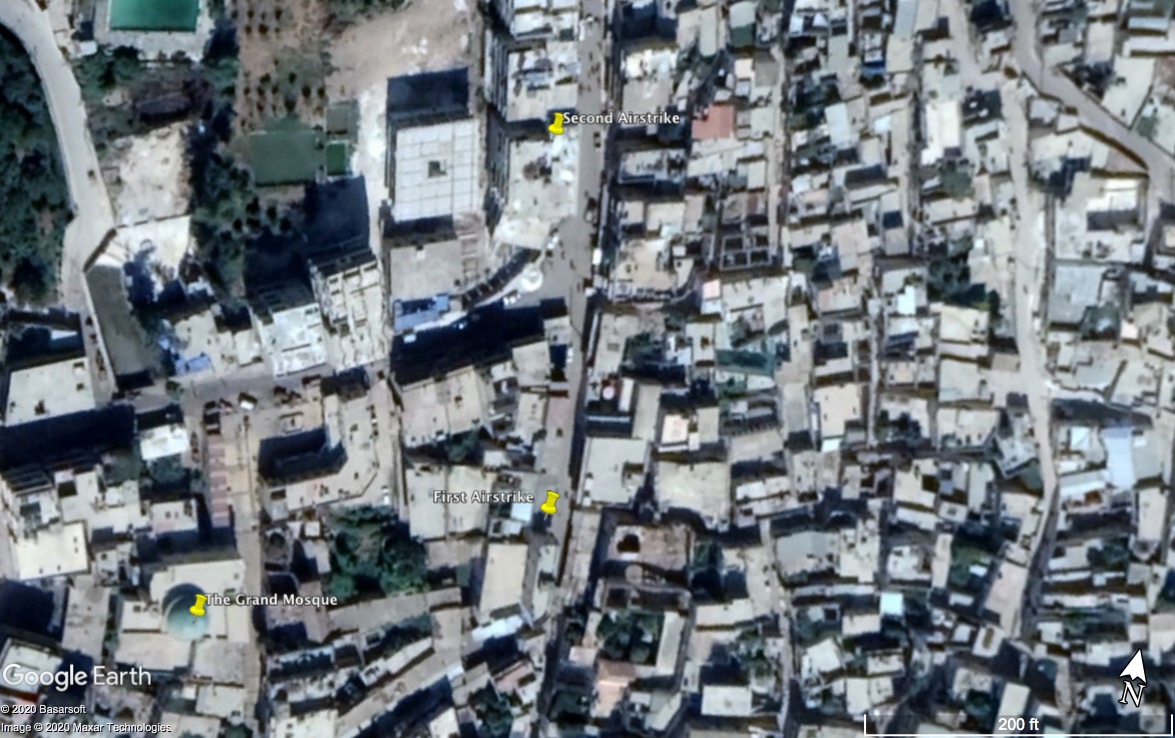 The location of the two airstrikes in the popular market area in western Harem. The distance between both attack sites is 90 meters.

Further confirming that Harem was hit with two strikes, a video posted onto Facebook and taken at the outskirts of Harem shows an airstrike on the city. Another airstirke is also shown in a video posted by Facebook user Khaled Al Aseer taken from a hill above the town. This video shows the surrounding area as well as the sun. Estimating the time from the position of the sun in the video, one of the strikes hit Harem most likely at around 15:30-16:30.

The sun’s position in a video from Facebook user Khaled Al Aseer confirms the time of the attack as between 15:30-16:30. Syrian Archive used the tool SunCalc to estimate the position of the sun around the alleged time of the attack.

These estimated times match video reports documenting the attack from the Syrian Civil Defense in Idlib. According to a Civil Defense member interviewed in the report, the two strikes on March 22 took place at around 16:00 after the call to Salat Al Asr (the late-afternoon prayer) which, in the Idlib governorate, was recited at 15:08. Corroborating the time of the strikes, the member also mentioned that, given the extreme damage to the city from the attack, the efforts to rescue those stuck under the rubble took over 17 hours.

Two satellite images from Google Earth Pro of the attack sites, 11 September 2017 on the right; 24 April 2018 on the left, showing the destruction to the residential complex and the market.

In the hours and days after the strike, reports from local news sources and civilians detailed the damage to the market and residential complex directly hit by the strikes. 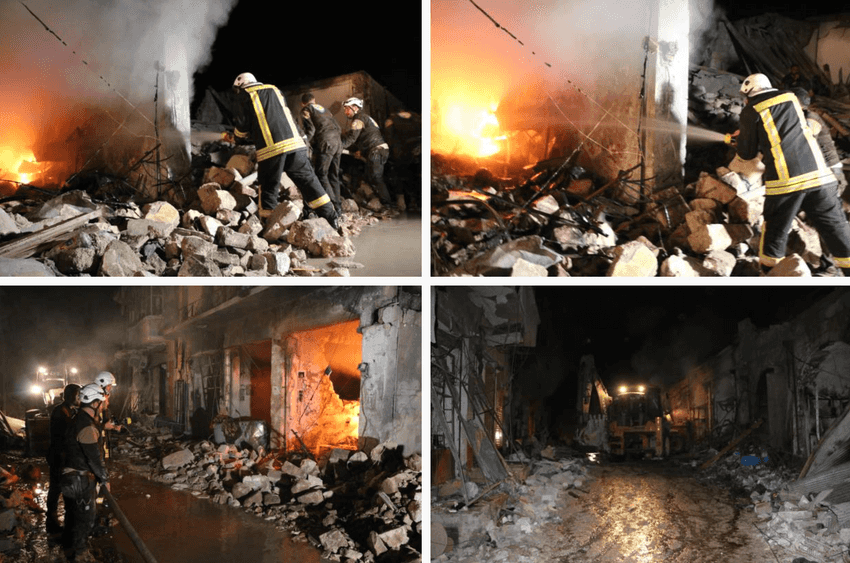 Images published by Zaman Al Wasl showing the efforts to put out fires in the market started by the first strike.

Videos and images published by Qasioun News Agency, Zaman Al Wasl, and Harem resident Hassan Youssef Al Zikr reveal the damage to the market from the first missile strike. Media shows the market deserted with burned out stores and buildings crumbled by the blast. 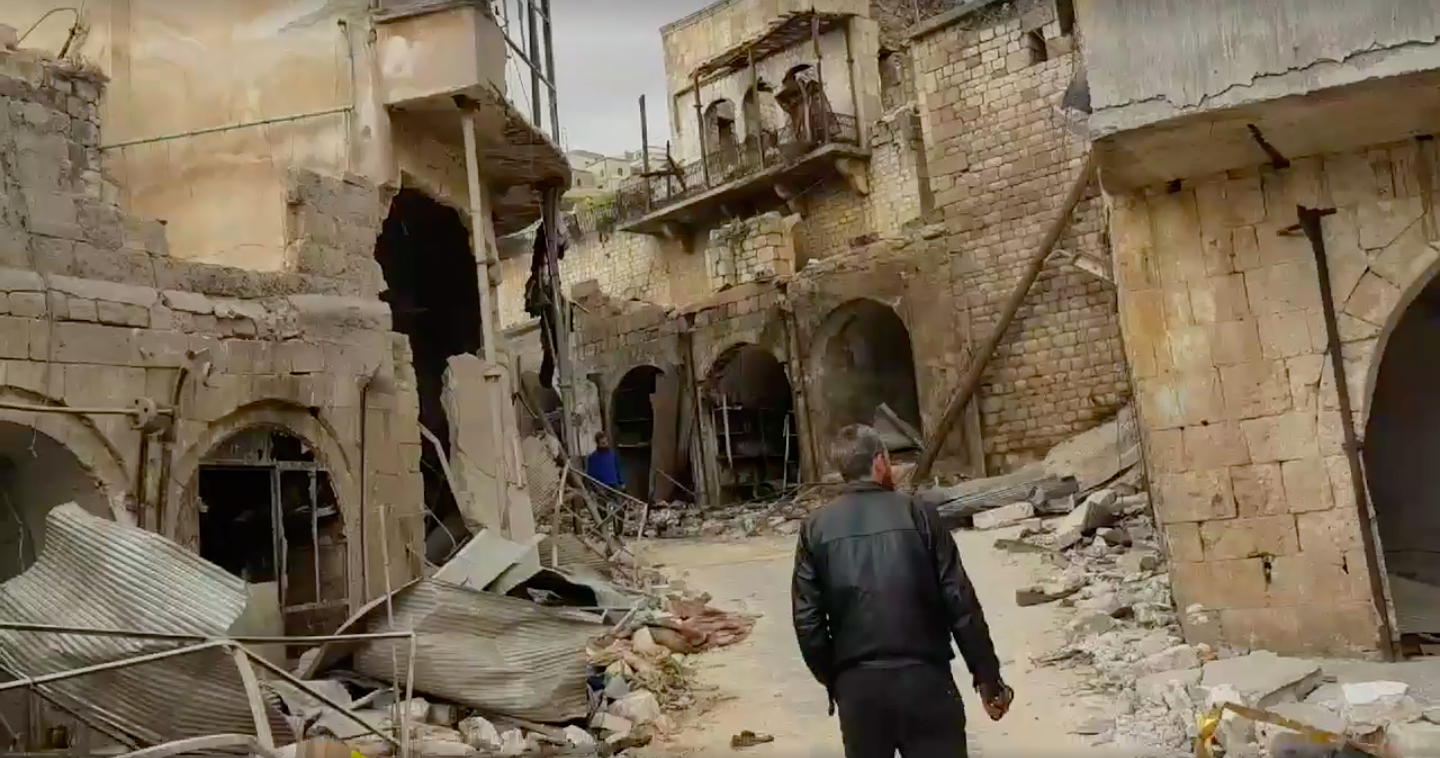 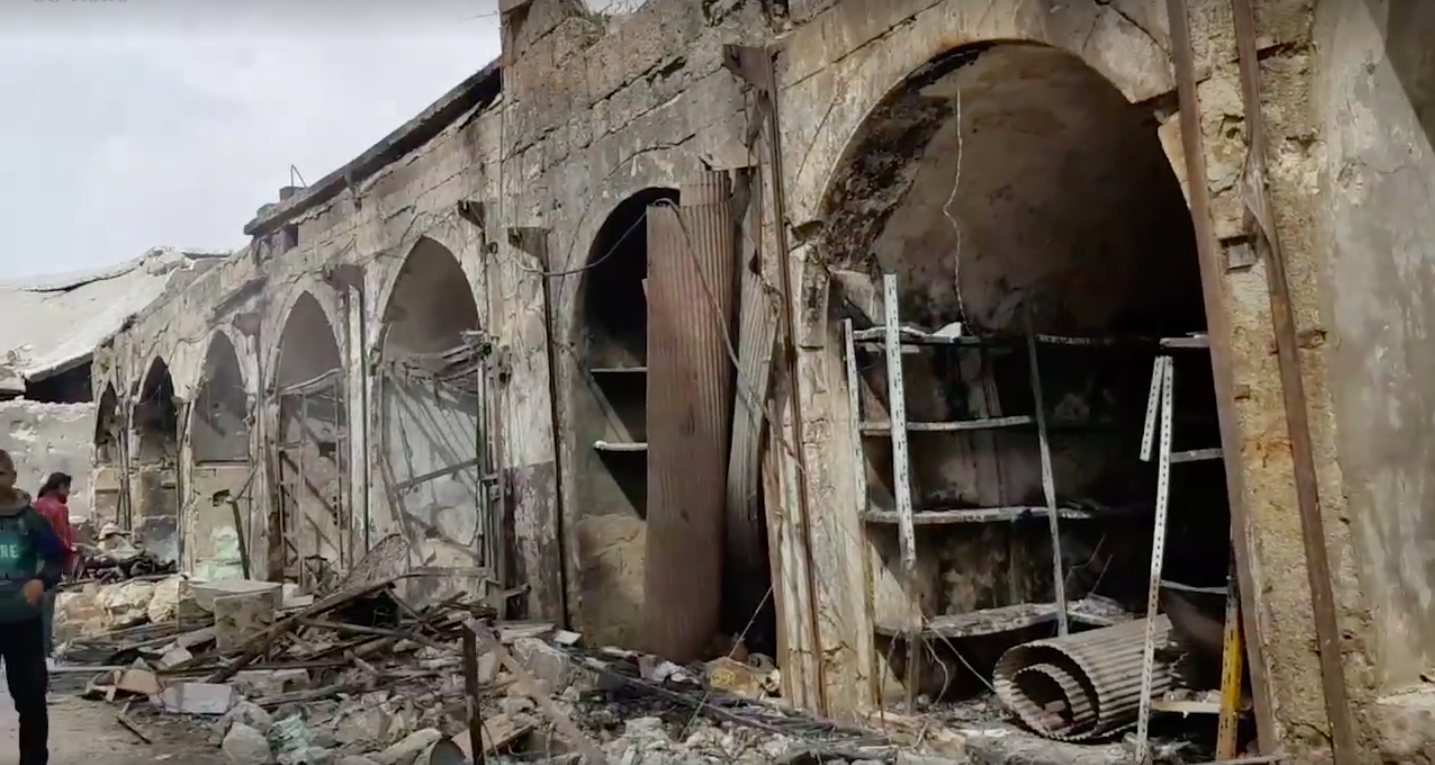 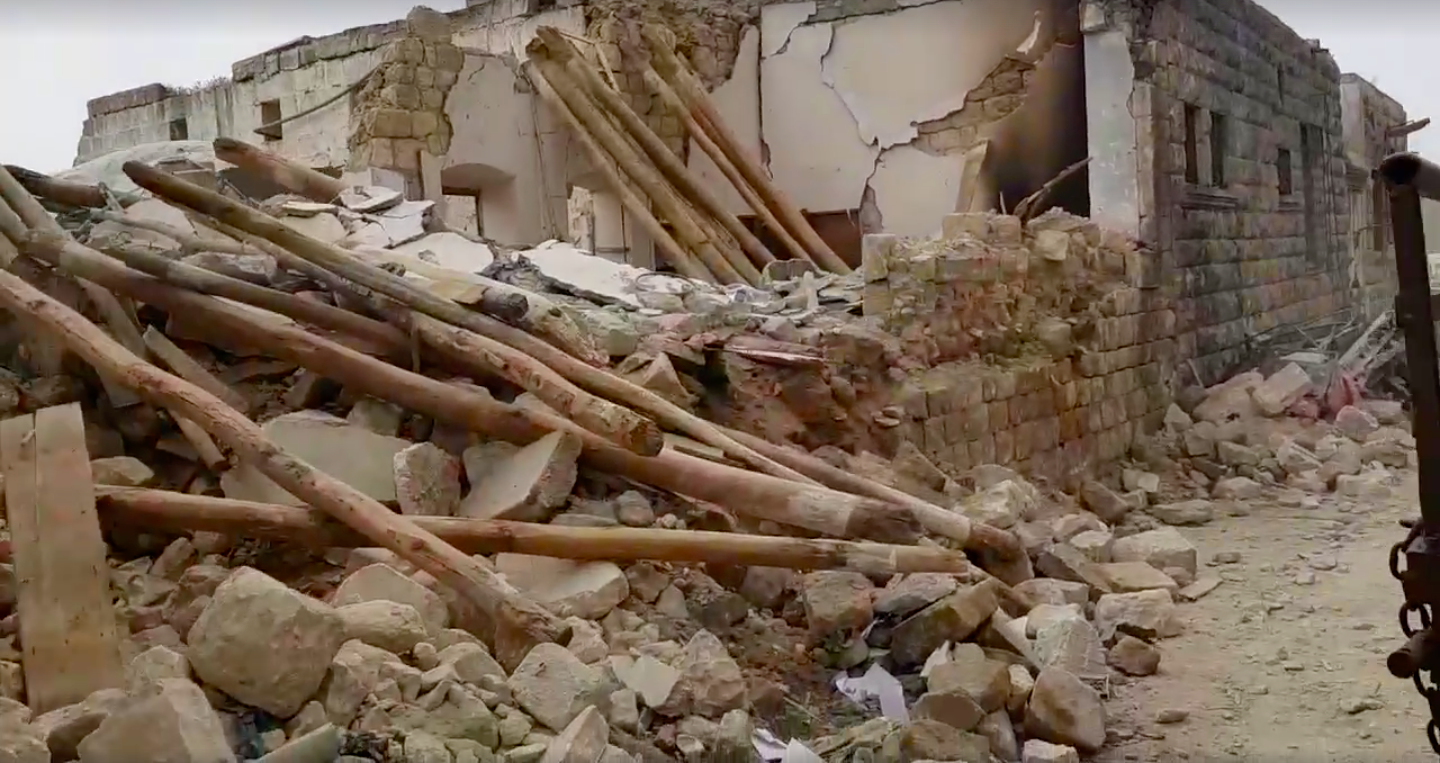 Stills from one of Hassan Youssef Al Zikr’s videos showing the damage to Harem’s street market.

Similarly, Thiqa News Agency published a video after the attack showing the impact site of the second strike. In the video, a witness confirms that, pointing to the location of the second strike, the building hit was a residential complex inhabited by families. With parts of the building still standing, the video shows a side of the complex completely destroyed and collapsed. Furthermore, a video posted by Baladi News Network shows the effort to rescue civilians buried under the rubble of the residential building. 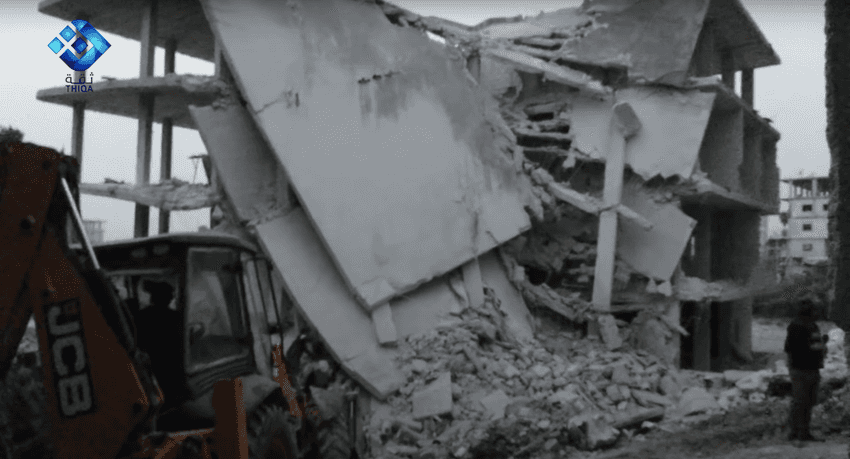 A still from a Thiqa News video report showing the damage to the residential building hit in the second strike on the city. 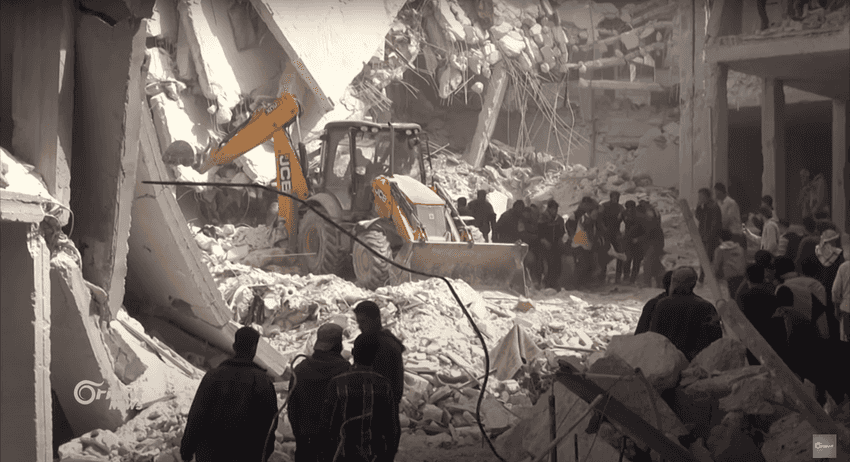 A still from a video posted by Orient News showing the effort to recover those stuck under the rubble of the collapsed building hit in the second strike.

The efforts to recover those injured and killed in the attack were widely documented. Videos from Nedaa Syria Network and Baladi News amongst others show the intense efforts by the Civil Defense to rescue those injured by the strikes. Moreover, journalist Ayman Abu Al Shouq published a video on YouTube showing victims of the attack in the hospital.

Initial posts from the Civil Defense reported over 31 killed and 50 injured in the strikes. The following day after the attack, Orient News published an updated video report detailing an increase in the number of civlians killed from 31 to 42. Noting that the location of the market is far from any military headquarters, witnesses in the video report confirmed the market was crowded with residents at the time of the attack. Confirming the number killed and injured, Al Araby and Enab Baladi purport the Russian Air Force as responsible for the attack. Syrian Archive confirmed at least 34 civilians killed in the attack.

The Kafr Yahmoul Coordination Committee’s Facebook page published the names and ages of the first 27 killed in the attack on Harem.

In addition, civilian journalist Mohammed Abdel Qadir Sobeih published the names of a family from Al Tah killed in the attack on Harem:

To provide a further layer of verification, the Syrian Archive cross referenced findings from open source media with flight observation data from a spotter organization. Data for flights occurring briefly before, during, and briefly after the time of the attack (around 16:00) on March 22, 2018 around Idlib, Lattakia, Hama, and Aleppo was closely analyzed.

This data showing Russian aircraft around and near Harem further corroborates the time of the attack as around 16:00. Matching claims from local news sources, activists, and other open source information, this data additionally points towards the Russian Air Force as potentially responsible for the attack. However, the information available does not show the direct involvement of the observed aircraft in the attack on Harem. Nevertheless, the presence of these aircrafts flying towards the town around the reported time of the attack increases the likelihood that the strikes were carried out by the Russian Air Force.

On March 22, 2018 allegedly Russian planes hit the town of Harem severely damaging a residential complex and the town’s market. The attack killed at least 31 people and injured over 50 others. The time of the attack, extent of damage, and number of those killed was confirmed through open source information found online. Corroborating open source media, flight observation data points towards the Russian Air Force as potentially responsible for the attack. However, given the limitations of open source information, the Syrian Archive is unable to definitively identify the perpetrators of this attack. A report from Syria TV published months after the attack shows the market’s recovery and restoration as Harem residents open their shops again.